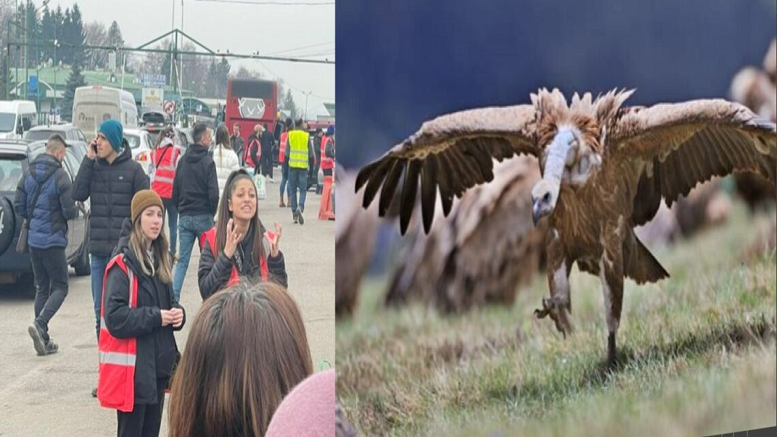 Christian missionaries certainly took Mr. Churchill’s advice to heart and have wasted no time in targeting vulnerable Ukrainians.  There are videos and photos coming out showing American missionaries preaching at tired and ragged Ukrainians getting off the trains at the Poland-Ukrainian border.  To date, nearly 2 million refugees have flooded into Poland ALONE; a total of 3 million refugees have fled the country to other border states, including Hungary, Moldova and Romania.

In the name of helping refugees, missionary groups are preaching to them and not offering any real material help.  Their concerns are for food, clothing, medical care, and shelter.  Many Christian organisations claim they are offering that, but also, as Franklin Graham said in a recent article on Samaritan’s Purse, “are deploying life-saving medical care to aid people who are suffering. We want to meet the needs of these families in their darkest moments while pointing them to the light and hope of Jesus Christ”. It should be noted that Ukraine is 90% Christian, either following the Orthodox sect of Christianity or Roman Catholic. But they are not considered the right type of Christian by American evangelical missionaries.

Speaking of Franklin Graham, it should be noted that Mr. Graham is a huge fan of the Russian President Vladimir Putin.  He has praised Putin on numerous occasions, while denigrating his own country’s president if they were from the Democratic party in the USA.  Of Putin’s leadership, Graham had this to say: “And I very much appreciate that President Putin is protecting Russian young people against homosexual propaganda”.  He also appreciated how Russia has made the Russian Orthodox Church the state religion if not in name, then in spirit.  People from non-approved religions (even other Christian sects) are persecuted everyday for their beliefs.  The Russian Orthodox Church has also signed off wholeheartedly on the invasion of Ukraine, likening it to a crusade to save the people, particularly of Russian ethnicity, of Ukraine.

Another American missionary organisation, Awakening Europe, is bypassing the offering of real help and is instead offering empty faith healing, as this shameless missionary boasted about on their Facebook page

The most concerning development coming out of the Russian invasion is of a former American state representative possibly trying to steal Ukrainian children and bring them to the USA.  Former Washington state representative Matt Shea has been in the town of Kazimerz Dolyny, in Poland.  He is with a group of Ukrainian children supposedly in different stages of the adoption process, supposedly on the behalf of a US nonprofit called “Loving Families and Homes For Orphans”.  The group, based in Fort Worth, registered with the Texas secretary of state in 2018. No such group is registered as an adoption agency with the Texas Department of Health and Human Services. The group is also not registered with the Intercountry Adoption Accreditation and Maintenance Entity, the group that oversees American agencies involved in international adoption.

Loving Families and Homes for Orphans was registered in Florida just one month ago. It lists its purpose as: “To provide loving and caring homes and families for the orphans from other countries for a short time period”.  An aide of the mayor of Kazimerz Dolyny first went to check on the children but was confronted by Shea, who demanded to see her ID and would not tell her his name.

Shea was involved in multiple domestic terror incidents in the US, including a stand off in a wildlife preserve in 2014 in the US state of Oregon.  He also authored a manuscript titled “Biblical Basis for War”, where he argues for establishing a theocracy and for the death penalty for non-Christians who refuse to convert to Christianity, among other penalties.  That includes Hindus.

It remains to be known what Shea’s motives were for starting a nonprofit only in the last 2 weeks, to supposedly save orphans.  Given the propensity of Christian organisations to allow for mass child sexual abuse, or even engaging in mass child sexual abuse and trafficking, it would be safe to assume Shea’s motives are not pure and altruistic, but sick and perverted.  Could he have also been looking for captive, scared children, to adopt out to white American families? Or to bring them back to help form terror training camps in the USA? Again, it remains to be known.

Mission Kaali will continue to watch this, as we watch with everyone else to see how the war in Ukraine will unfold.

(This article was published on missionkaali.org on March 23, 2022 and has been reproduced here.)