After Janmashtami, PETA India targets Raksha Bandhan linking it to cows and leather 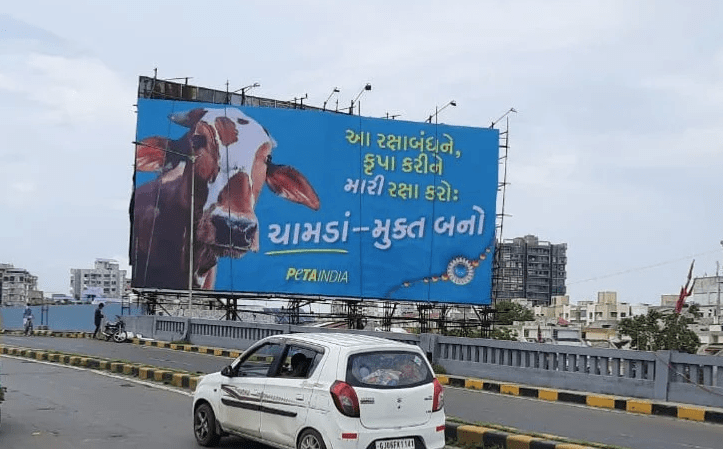 At the outset, as cow loving and cow revering Hindus, we would like to extend our heartfelt gratitude to PETA India for sparing a thought for cows.

However, ‘Cows are our sisters and deserve protection’ is PETA India’s claim, and in their huge hoardings, the organization tried to employ the Hindu festival Raksha Bandhan, as a tool to pledge protection of cows. They “inspired” people to go leather-free during Raksha Bandhan, and that is where they not only lost their Hindu audience but also invited their ire.

Yes, it is paramount for the Bharatiya sanskriti to protect cows, but to distort (some would call it denigrate) a significant Hindu festival in a bizarre manner for their ‘no leather’ agenda is offensive, to say the least.

The interpretation of PETA’s messaging for the casual onlooker could be that Rakhis are made out of leather.

No. Rakhis are traditionally made out of rolis, embellished with stones, glitters, glossy papers, sequins, and other similar material. Hindus took to twitter and Facebook demanding PETA India point out where did they see the use of cow’s hide in the festival of Raksha Bandhan.

The other interpretation is that PETA wants Hindus to take a pledge to protect the cow on a festival day which basically celebrates the bond between sisters and brothers – sisters tie a rakhi on the wrist of their brothers, who pledge to protect them. Trust left-liberal activists to take any Hindu festival & tradition, and twist it as an occasion for preachiness – to peddle whatever ‘cool’ cause that catches their fancy. You need an especially perverse mind to link animal cruelty and leather to a festival like Raksha Bandhan!

The irony of asking Hindus to protect cows, in a country where Hindus who do so i.e. gau rakshaks are labelled ‘terrorists’ by the same left-liberal PETA crowd, is impossible to ignore. When Hindus try to stop illegal cattle trafficking, they are told they are disrupting an ‘important economic activity’ – but the same activist crowd doesn’t bat an eyelid when PETA wants a complete stop to the leather industry.

This is not the first time Peta has used a Hindu festival to peddle their supposed love for animals. Back in Janmashtami 2018, they had issued the following message. The cow, her milk, and products made out of the milk, like ghee, curd, butter hold cultural significance for the Hindus who have domesticated the cows since antiquity. She has been our family, we have considered her a mother-figure since long before the liberals of PETA found a “sister” in her. Her milk and milk products are irreplaceable in our poojas and charanamrit. Bhagwan Krishna is the most famous gwalas (cowherd) in this part of the world who has nurtured a special love for the cows and was so fond of the butter made out of her milk that he would steal it from the homes of his neighbors.

Preaching veganism, and asking the Hindus to abandon milk products, that too during Janmashtami was an insensitive and tone-deaf comment that was made issued deliberately to play around with the Hindu sentiment.

PETA’s role along with other animal rights NGOs in distorting the issue of temple elephants, and ripping elephants like Lakshmi away from their loving temple homes, is another example of how transplanting Western notions and frameworks without understanding the native culture can have disastrous consequences.

Coming back to the present situation; Rakshabandhan this year will be celebrated on August 11th. Interestingly, on July 31st-August 1st, that is 10 days before Rakshabandhan, falls Eid al-Adha or Bakr-Eid, also called the ‘Festival of the Sacrifice’ for which Muslim clerics say “Most schools of fiqh accept that the animal must be slaughtered according to the laws of dhabihah and that the animal in question must be a domesticated goat, sheep, cow or camel.”

What stopped PETA India from issuing a message against slaughtering cows, or any other animals, during the Muslim religious festival? They have never shied away from preaching and taunting Hindus during Holi, Diwali, Janmashtami, and now Raksha Bandhan.

Or is it because they still remember Bhopal from 2 years back where female PETA activists were brutally assaulted while promoting a ‘vegan Eid’ – have PETA’s highly-paid head honchos followed up on the legal case against the radicals who assaulted their activists, or is all their bravado reserved for Hindus alone?

Now, as natural cow lovers, Hindus will always be against any kind of brutality on cows – cow slaughter being the last thing on their minds. It would have been much better had PETA India summed up the courage to address those who slaughter cows for meat and sacrifice for religious purposes or the liberals and communists in Kerala and West Bengal who hold beef festivals in cities hurting the religious sentiments of millions of Hindus.

Earlier, a PETA billboard in Lucknow urging people to stop the slaughtering of goats was removed. Police claims that the hoarding was taken down by PETA itself after Muslim clerics claimed to be offended by the message just days ahead of Eid. PETA meanwhile has claimed that it “has not agreed on the billboard removal.”