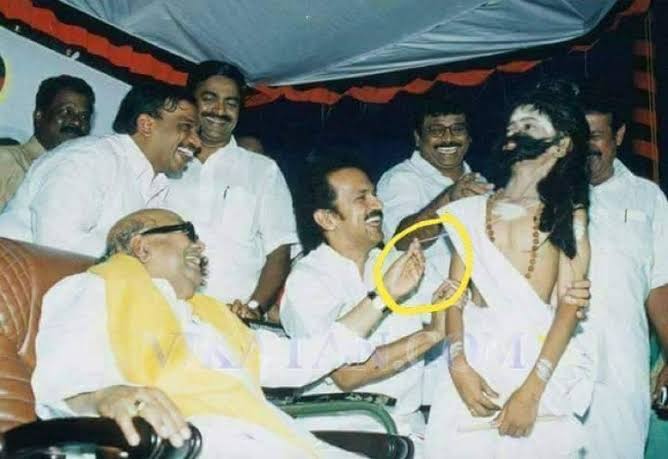 Elections are only a month away in Tamil Nadu. Every party has started to throw promises of doles to win the election. Like always voters at large are mainly worried about who would pay more before elections and after they come to power. But hatred shown towards a small community that has mostly migrated to other states and countries is silently being brushed away like always.

However for a change DMK, which has time and again spoken ill of Hindus and Hindu Dharma, had to declare that they are not against Hindus and that in fact they were the only party truly working for the welfare of Hindus. Now the president of the party MK. Stalin and his son Udhayanidhi can be seen posing with the Vel (spear of deity Murugan) and visiting dharma gurus. While DMK and its leaders’ anti-Hindu attitude and history is well known by now, their blatant hatred for the Brahmin community derived from their parent organisation Dravidar Kazhagam and its founder EV. Ramasamy aka ‘Periyar’ isn’t that well reported.

A couple of remarks like late Karunanidhi saying that “DMK is not Shankara math” regarding selection of the successor (the irony aside), Stalin saying that mantras used in Hindu marriage ceremonies have ‘vulgar meaning’, Kanimozhi asking why Tirupati Balaji needs armed guards to protect the Hundi etc. are known among many but how DMK and its leaders make everything about Brahmins is less known. With DMK being forced to defend itself on the Hindu front, it is the right time to bring out their bigotry and the level of hatred they induce against the Brahmin community which is at par with Nazi bigotry against Jews.

DMK chief Stalin in his keynote speech in a party conference in Erode in 2018 began his speech with the words “from then to now, those who are 3 in 100 among us have never failed to show their true colors. But while that 3% community is united the remaining 97% isn’t, which is why ‘Varnashrama Dharma’ is rearing its head again. Periyar spent his life solely for the purpose of making us be aware of this fact and understand (the situation)”.

DMK leader M.K.Stalin keynote kicking off his keynote in Erode conference (24-03-2018) with venom on the 3% tamizh brahmins, a section of voters. #UnderstandDravidam pic.twitter.com/lLebpwRBwM

Why is something that was said in 2018 needs to be brought to notice now? Because DMK and its allies have declared the 2021 assembly election as a war against ‘Sanatana’ (Hindu Dharma). VCK chief Thirumavalavan, coming out of DMK headquarters after finalising seat sharing again declared that this election is against Sanatana Dharma. Again on March 8, on the occasion of international women’s day he tweeted that Sanatana forces should be defeated to protect the rights of women.

They also hide that what is called ‘caste discrimination’ in Bharat and the sub-continent is a social and not religious issue; it is a feudal hangover made worse by colonial rule and is fast diminishing. While society is rapidly moving beyond such divisions, outfits like DMK, Bhim Army and the left-liberal-Islamist nexus are spreading hatred against so-called ‘upper castes’ creating a perverse form of reverse discrimination.

DMK and fellow Dravidianists create a bogey of Brahmins controlling every field despite being only 3% of the total population of the state. They have successfully established this narrative and now are on to the next step, which is removing/relocating even those who remain in the state. This is a bogey used to keep the 97% in a state of trance so that they are ignorant of the fact that it is the political dynasties among the land-owning intermediary castes that have sprung up as the new elite, that control and suppress the marginalised.

BJP which presents itself as a force of development is seen as a threat to this illusion created by the Dravidianists that the 3% Brahmins are the reason for every ill of the state. But as they cannot oppose development openly they’ve resorted to demonizing the Brahmin community again and also attack Sanatana Dharma with the same stone. Whether or not the public would like to accept this fact, it is indeed going to be a war between Hindu (Sanatana) Dharma and the Dravidianists, for those who have pledged to uproot it are trying to come to power by hook or crook.