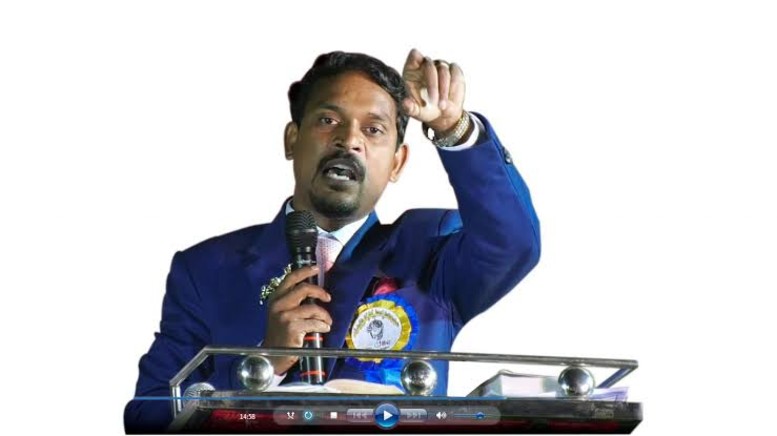 The recent calls for dividing Bharat coming from pastors in Andhra Pradesh and Telangana is said to be a reaction to the arrest of a fellow pastor Honey Johnson. The pastor was arrested for making derogatory comments on Hindu deities and hurting religious sentiments of Hindus. He had been brazenly posting many derogatory contents on his YouTube channel and the Cyberabad police arrested him based on many complaints against the same.

Pastor Johnson had made objectionable comments about Prabhu Shri Ram saying, “Who said Ram is Suryavanshi? Did a yogi, rishi or anybody like that say that he was born to Dashrath? He was not the son of  Dashrath and neither was he a Suryavanshi. He was born when evil gave a bowl of sweet(payasam). So he is the son of either that evil or the horse(referring to the ritualistic procedure of Putrakameshti yagna). So who is the real father of Ram, you decide for yourself. Which of your gods/goddesses’ birth is good? They were all born like this by approaching evil and horses.”

After abusing sanatana dharma like this he talks about the greatness of Jesus. He says “Do you know who the father of Jesus is? He is the supreme father. A virgin gave birth to him and he became the saviour. How many follow Jesus? Crores and millions. And how  many follow this filth? Nobody. Their religion is so filthy and dangerous. That is why they are defaming Christians.”

Similar to the strategy of many successful evangelists, pastor Johnson first makes Hindus feel ashamed about their customs and rituals. After distancing them from dharma in the name of making them aware of superstition, he introduces a better option, Christianity. Then he asks, “Now tell me, isn’t Jesus the real god? The purest god?”. Then he gives the solution. “Hindus, Jesus is the saviour. He took rebirth conquering death”, he says.

He further insults Hindu deities saying, “Your deities have committed so many sins. Their births itself were because of the sins they committed. If you continue to believe them then how will you know that Jesus was the purest of souls?. When your deities’ birth itself is filthy then how can you question Jesus?”. In the end he prays, “Help them(Hindus) leave this dirty, wicked and dangerous religion”.

The pastor also released a short film questioning the births of Shri Rama, Sita Devi, Lakshmana and Hanuman. When objections were raised against the film, he challenged Hindus to try and stop the film. Many complaints were filed on him for posing a threat to communal peace and hurting religious sentiments. He was arrested on August 18 and a myriad of protests were organised to condemn his arrest and demand his release. In these protests allegedly pastors stoked separatism, demanding a separate country for Christians by dividing Bharat into two. Earlier pastor Santhosh Kumar of All India True Christians Association had demanded for the same in a rally.