500 year wait is finally over, but this is just the beginning 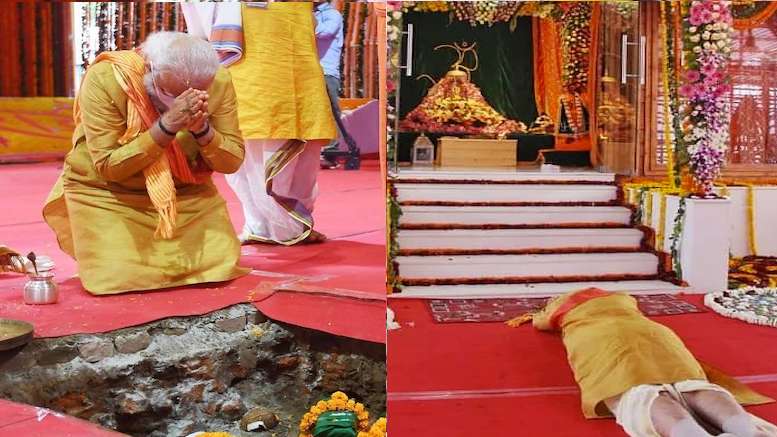 The worst part was the obstacles laid by the independent nation state, that we thought would protect us, in healing this deep civilizational wound. But all that can wait. Today, we celebrate. We honour the memories of the millions who carried the flame before us, who kept the diya of faith and hope burning during the darkest hours, and who finally took matters in their own hands, tired of the perfidy of the secular state.

To those who hold their ideas and theories as superior to the simple bhakti of millions of ordinary Hindus; to those who think that they are the defenders of some imagined Constitutional abstraction which the unwashed masses cannot fathom but must blindly obey – I have only scorn for you. Some pity too, because in your deracinated state you forget what it is to share a divine bond with your fellow countrymen, but mostly scorn. Blinded by conceit, you have literally feasted on the blood and toil of the common Hindu who trusted you for decades under the illusion that you have his/her best interest at heart. Not anymore.

Now, those of us who have awakened to the civilisational underpinnings of our nation will not rest until we have demolished the edifice of pretentious lies and duplicity constructed by you. We will not rest until the knowledge of your betrayal, your subservience to our erstwhile colonizers, is known to every man, woman and child in this land. The masks and facades you use while peddling your insidious agendas will be shredded, and you will have to endure the public gaze, the hurt eyes asking the question – WHY? Why did you betray us for so many years? That will be your fate.

And while we celebrate today, we do it with the full realization of the gigantic task that yet beckons us. Today, the deepest gash on our collective consciousness has finally started to heal. But many more gashes remain. Many new dangers have sprung up, ironically under the hostile and sullen gaze of the secular state that was established after independence from those we thought were the final set of colonizers.

We now know that we will never get our due from those who pull the strings of the secular state. The discrimination that we endure in the land of our ancient civilization; the apathy – no, the hostility we face and endure is very real. Hindus are not safe, not in Bharat or elsewhere. They are in many ways even more defenceless against our civilisational enemies than they were before independence. This knowledge will not be swept under the carpet for the sake of a non-existent identity that the secular state tries to force down our throat while it waits for our civilisational memory to be fully erased. This new awareness will not be sacrificed at the altar of short-term political goals. We will defend ourselves. We will fight back.

Efforts to systematically battle our internal enemies on all fronts will now be redoubled. There is not a minute to lose. No quarter will be given, none asked for. We know how much you hate us, despite the tactical retreat and Janus-faced homilies some of you have started spouting. We have learnt to pay you back in the same coin, with interest.

We will not rest till we have constructed a new Bharat, where every Hindu and Dharmik can live a life of prosperity, security, dignity and pride. Jai Sri Ram!