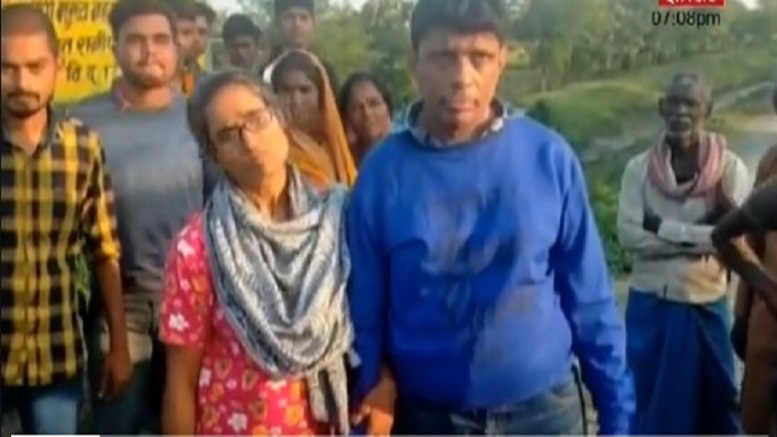 Two Christian missionaries from Kerala were apprehended in Bihar for illegal conversion. Villagers informed the police that a duo, including a woman, was distributing bibles, denigrating Hindu deities and trying to lure poor villagers to convert to Christianity. Pastor George and Rishu were taken into custody from a village in the Supaul district.

It is not known whether George & Rishu are married but from the look of things they seem pretty close. The pastor and the lady were living together in a rented house.

What enraged the locals who caught them seems to be the fact that the couple, while trying to convert a few passers-by and farm workers, engaged in denigration of Hindu gods. Some Hindu ladies resisted and raised an alarm following which locals apprehended them.

Reports show a video of the villagers questioning the couple where George says that he is from Kerala and lives in Bhelahi village. Though huge amounts are pumped in via FCRA for the conversion mafia, George said that he gets paid Rs.11,000 per month for his conversion efforts to Christianity.

He confessed that they have been to many villages and have converted many Hindus by offering them money and other incentives. It appears these 2 have been engaged in conversion for the past several years.

In another news clip posted by News 18 Bihar, the reporter shared the Christian literature being distributed by the missionary couple.

A book duplicitously titled ‘Pavitra Shastra‘ (Holy Book) to fool gullible Hindus, which is actually a Hindi version of the Bible, was being distributed. It contains the usual hateful rhetoric against non-Christians, especially ‘idol worshippers’ like Hindus. A VHP member described how the couple was preaching Christianity and denigrating Hindu Dharma to some local families, when people got agitated and hearing the commotion, the activists gathered.

Villagers and Hindu organizations have opposed such illegal conversions and appealed to the government to stop such conversions immediately or face protests.

Although they were handed off to Bhimpur police, News18 reports that they were let off due to ‘lack of a written complaint.’ 3 other Christian pastors were arrested from the Supaul area earlier for similar conversion activity, but they are all out on bail today.

Such incidents are being reported with increasing frequency from hitherto untouched parts of the Hindi-speaking belt, which shows the deep penetration of the Christian missionary mafia.

Islamic missionaries also use a similar approach of giving Hindu-sounding labels to their religious literature: IAS Iftikharuddin had penned books titled shuddh upasana tatha naman (pure worship and prayer) and shuddh bhakti (pure devotion) for his da’wah work, in which Mohammed was presented as Kalki avatar.

This shows a convergence between methods and strategy of both the major proselytizing Abrahamic religions, who have zeroed in on Bharat’s Hindus as the easiest target for pushing their aggressive agenda. They know that in the secular Indian state, especially the judiciary, they have a strong ally which will tolerate all abuse directed against the sleeping Hindu majority in the guise of free speech and Constitutional right to proselytize (Article 25).

When likes of Pastor Vijaya Kumar, arrested for cursing Hindus to hell and abusing Bharat Mata, are allowed to come out on bail and demand a separate country for Christians, one can understand why missionaries operate with such impunity in Bharat. Even tiny Nepal is putting up a much better fight against the Christian missionary mafia than the Indian state.

Another bitter truth is that Hindus are disorganized. Barring a handful of Hindu socio-political organizations like VHP, Bajrang Dal – which also lack a consistent, long-term vision and operate mostly in reactionary mode – there are hardly any religious organizations working to counter this sustained assault by anti-Hindu forces.

Our mathas, akharas and Hindu sect/community based organizations have no inclination or clear plan to counter the conversion mafia, either spiritually, intellectually or legally. A new breed of legal/online activist groups like LRO, LRPF etc are making their presence felt, but such efforts have to be scaled up massively and merged with a solid religious/Dharmic response to counter this powerful, strategic enemy.