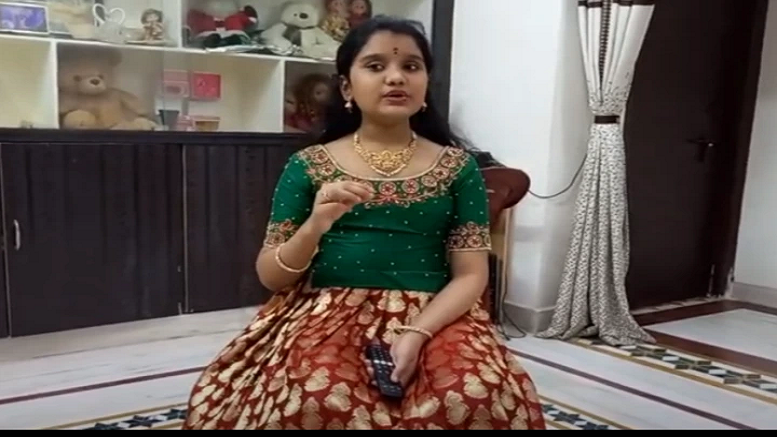 Love for books can be natural or cultivated. In the case of Saanvi Jamalpur, who is just merely 12 years old and a student of Class VIII, it was the former. And today, this student of Don Bosco High School in Bandlaguda Jagir, Hyderabad has made her parents and school proud as she has won several awards for her deft rendering of Bhagavad Gita.

Sharing her love for reading with New Indian Express she said: “My parents were both IT employees and we were living in Bengaluru. They used to leave me at the daycare, where I used to read picture books, children’s books, and as I started growing up, I started reading short stories and fiction novels, in addition to encyclopaedia, mystery, adventure, sci-fi, mythology and books on general knowledge.”

It was during the Covid-19 pandemic lockdown she was drawn to Bhagavad Gita. She was told by her mother Sunitha Jamalpur that as Gita is a revered scripture, one needs to read it after having a bath and also avoid eating meat.

It took her just 12 months to master not a few but all the 701 slokas of the scripture. In fact, in September 2021, she recited 58 slokas in five minutes to make it to the World Book of Records.

She also cleared the Srimad Bhagawad Gita Recitation Exam held by the Avadhoota Datta Peetham in Mysuru in 2021 with distinction. Pradeep her father informed that this exam was really tough. “They would say the first two words and she would be asked to recite the sloka till they asked her to recite another sloka. Sometimes the beginning words can be similar in different slokas, so it was tricky.”

Going beyond books, the youngster has set her aim to become an astrophysicist at the Indian Space Research Organisation. She is keen to do research on the data transmitted by the satellites in space, and eager to see satellites being sent to other galaxies also.

Hindus being prevented from visiting Charminar by Hyderabadi Islamists?