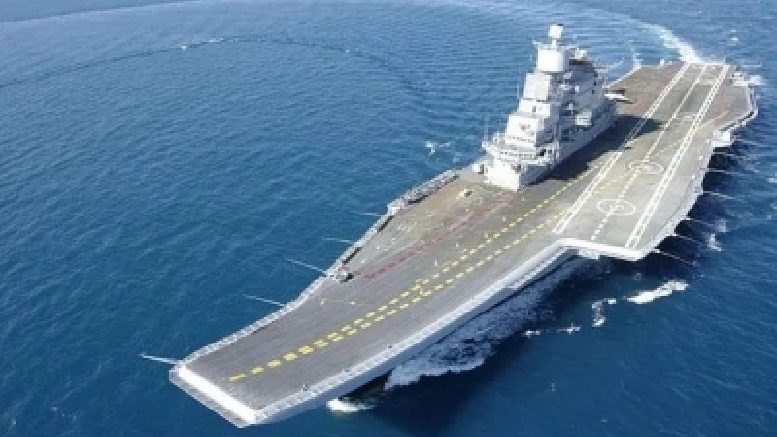 Prime Minister Narendra Modi will commission Bharat’s first indigenous aircraft carrier Vikrant at Cochin Shipyard. This will indeed mark a historic day. The commissioning of the carrier will dock with celebrations marking 75 years of Bharat’s independence. It will also give wings to the “Atmanirbhar Bharat” doctrine as the largest warship ever built has been designed and developed with homegrown Bharatiya talent and technology.

The 45,000 tonne Vikrant India has been the culmination of active collaboration between the Naval Ship Design Bureau and Cochin Shipyard Limited. The massive ship is 262.5 meters long and 62 meters wide. There are 14 decks, which can accommodate 1700 Naoveers. Capable of achieving 28 knots top speed she is expected to cruise at 18 knots on four LM 2500 gas turbine engines.

The Vikrant has a STOBAR configuration, enabling short take off by planes using ski jump and recover with the help of arrester wires. The ship will be capable of operating 30 fighter aircraft (presently MiG 29K) and a mix of Kamov 31 AEW helicopters, MH 60 R Multi Role helicopters and Dhruv Advanced Light Helicopters (Marine version).

The ship per se has over 75 per cent indigenous content. There are many industries associated with the building of the Carrier, including BEL, BHEL, GRSE, Keltron, Kirloskar, L&T, Wartsila India apart from 100s of MSMEs. Approximately Rs 19000 cr have been ploughing back into Bharat’s economy. This event puts Bharat in the league of six nations in the world that have capability to build aircraft carriers.

Vikrant has number of preliminary tasks to be completed before she joins the fleet for operational deployment. Foremost would be to establish airflow pattern on the flight deck at various speeds of the ship. This is an important parameter for launch of any aircraft/ helicopter from flight deck. The atmospheric air gets deflected by the high rising ski jump and later by the superstructure of the ship. Both these result in variations in wind direction and speed on various spots of flight deck. Post establishment of airflow pattern the helicopter test pilots of the three types of helicopters will carry out launch and recovery trials from various marked spots on the deck. This will assist the ship in marking those spots permanently. Based on data obtained and helicopter operating / handling characteristics, the Standard Operating Procedures will be evolved for generations to follow.

The fixed wing (Mig 29 K) carrier compatibility tests will be more exhaustive and time consuming. The airflow patterns will be fed into shore-based simulator and fly it to derive likely handling characteristics of the aircraft in those conditions. Gradually the test pilots will work out the wire pull out during recovery. For MiG 29K to operate, both launch and recovery aspects are important parameters since it must be right the first time itself given the high speeds involved. The operating data manuals will be produced for all future operations and will work as bible. The ship’s operations team has to be worked up for handling radar interceptions by day and night. One can imagine the tasks ahead. Once the ship has worked up with the aviation units, the fleet will integrate the carrier into a battle group or a task force.

Indian Navy’s operational philosophy is based on concept of Battle Groups centered around an aircraft carrier. Very often it is misunderstood that carrier needs ships for protection, not really. A composite battle group moves as one cohesive fleet of ships and submarines, each unit assigned different stations at large distances. The positioning is such that the battle group exercises sea control in a specific area for a particular timeframe as warranted by tactical situation. The fighters from carrier provide air cover to the fleet against any incoming hostile maritime patrol or fighter strike aircraft. In strike role these fighters also carry out weapon delivery on shores and inland targets in a joint tasking operation.

What will induction of Vikrant alter? A lot. After its induction, the Navy would be in a position to deploy two Carrier Battle Groups, one each on both Eastern and Western Seaboards. Much higher firepower on two sides of Indian peninsula alters the power balance in the Indo Pacific. Chinese aircraft carrier Fujian has taken to sea recently and is one year short of operationalisation. By the time the carrier gets fully operational with its aviation units, one can safely assume that it will be not before end 2024 or early 2025. China’s priority is Taiwan and therefore it doesn’t seem likely that aircraft carrier can be detached to Indian Ocean anytime soon.

On the other hand, the Indian Navy has the skills and concepts of carrier operations of over 60 years and that is a lot. It must not be lost. Carrier projects and provides visible deterrence to an adversary. It also demonstrates the intention of a country that it is ready not only to deter but also exercise the option of using its firepower at a place and time of its choosing. Carrier force is a force in being and warns an adversary by its shear presence.

Bharat is a formidable Quad partner and major player in exercise Malabar. The exercises have become complex with the combined operating procedures for anti- surface and submarine warfare. The fighter and Maritime Patrol aircraft of four nations have achieved interoperability and possibly interchangeability. Therefore, should an adversary have to be engaged in a conflict by the Quad in compliance of its stated charter, the Malabar component can be plugged in at short notice anywhere in the Indo Pacific. That would be most powerful conventional force in the world.

Vikrant’s arrival also indicates that one of the two carriers will always be protecting Bharat’s interests in the IOR while another carrier group is deployed elsewhere in the Indo Pacific. Therefore, Vikrant is reflective of Bharat’s intents in the Indo Pacific. With simultaneous induction of formidable MH 60 R multi role helicopters onboard the Vikrant one is looking at a powerful combination.

Bharat is at the cusp of occupying its right position in the redefined world order. A farsighted decision on the type of maritime power that Bharat should possess is need of the time, ability of which the present government under leadership of PM Modi has often demonstrated. A visionary and bold step is called for which will give Bharat the teeth it needs to tackle present and future geopolitical shifts; wherein Bharat has the opportunity to be one of the poles in the impending multipolar world order.