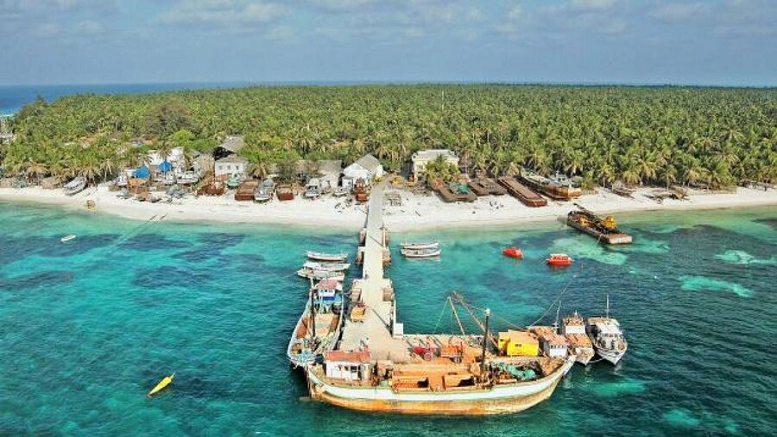 Picturesque group of 36 atolls famous for its rich biodiversity and blessed with the hue of natural opulence, was propped up in the news last year not for its turquoise water bodies but for the draft of reforms proposed by its Administrator, Praful Khoda Patel. Yes, Lakshadweep, ensconced on the south-western tip of Bharat, is up in arms against the Administrator as the inhabitants are afraid that the said reforms would turn out to be a recipe for natural disaster.

The fear in the minds of locals is well founded so also, the intention of the Administration to develop Lakshadweep as an attractive tourist destination in the line of Maldives is hunky dory commitment. However, apart from the visible intention of the government, latently it is trying to strangle out a brooding security threat which is slowly but surely germinating in the soil of Lakshadweep. Both the people and the government are not blowing out of proportion. Hence, it is necessary to strike a balance.

The importance of Lakshadweep

Lakshadweep is an archipelago of 36 islands that are located some 400 km to the west of Kerala. Of the 36 islands, only 10 are inhabited. The islands have a total land area of just 32 sq km but confer a 400,000-sq km Exclusive Economic Zone (EEZ). 96% of its population is Muslim and has a linguistic, cultural and religious affiliation with the people of Kerala. Hence, it is most vulnerable to the discontent that originated there. Radical groups such as the Popular Front of India have already infiltrated Lakshadweep.

The geographical proximity of Lakshadweep to the Maldives and Sri Lanka increases the likelihood of the impact of political turmoil in these nations. Growing presence of China in the Indian Ocean and the age old challenge posed by pirates in the Indian Ocean could make Lakshadweep a hotbed of criminals and anti-national activities. Last year, INS Suvarna intercepted a Sri Lankan boat west of Lakshadweep with heroin worth Rs 3,000 crore onboard, but as stated anywhere, this archipelago is showered with abundant biodiversity, having a variety of species in its bosom, and if a tourism industry is developed in the region, exploitation of nature is on the card.

The most logical way out is to develop Lakshadweep as a military establishment in tandem with the necessary research and development back up and logistical support.

Besides surveillance, these detachments work as observance and reporting organisations. And, there are plans for a fully operational navy base in Lakshadweep. A bigger facility on Minicoy is also under consideration, because of its proximity to the Maldives (71 nautical miles).

The efforts by the government of Bharat are commendable, however, they are inconsistent with the proposed draft rules, planning to develop Lakshadweep as a tourist destination. For security reasons and secrecy necessary to carry out operations, tourism and defence establishments should not go hand in hand.

Three years back, a news portal published a report pointing out a Chinese business delegation attempted to spy on Indian naval bases, specifically INS Kadamba in Karnataka and APJ Kalam Island on the Odisha coast, also known as Wheeler Island. If tourism is developed on Lakshadweep, such incidents will become more common, and perpetrators may escape capture.

The strategic location of Lakshadweep and its vulnerability towards regional kerfuffle demands its conversion into dedicated defence island, barring the regions which are already under inhabitation. Numerous islands in the world are used by their respective rulers as territories for dedicated defence facilities. One of the examples is Shoal Bay, under the control of the Australian Signal Directorate, having the mission of interception of satellite communication and high frequency signals.

Even Bharat is reportedly developing its own dedicated military base in Agalega near Mauritius. If Lakshadweep becomes a touch point between mainland India and Agalega Island, India can effectively outsmart China in the Indian Ocean region. The benefit of such an exclusive facility is that it provides all the necessary assistance to the settlers, besides effectively tackling the security challenges in the region. Research and Development facilities along with active defence capabilities may provide solutions to the problems of civilians also. This would help locals to deal with challenges posed by nature.

How many of us know that the serious death cause in Minicoy Islands is head injury due to collisions with coconuts drifting from the trees rather than road accidents? The island’s marshy jungle region is best suited for jungle warfare training to effectively deal with threats on the mainland, particularly by the Naxalite and militant groups in the North-East region.

The important aspect should be focused upon is that the reforms envisioned by the Central Government are likely to disturb the indigenous culture of the island people, which account for unnecessary triggering of non-cooperation, resistance and animosity from them. The best possible solution is to zero in on developing Lakshadweep as a large military establishment with various defence facilities in order to counter any type of security threat to the country and also to avoid disturbance of local lifestyle and environmental damage. Bharat, should prevent its enemies from fishing in the troubled waters.