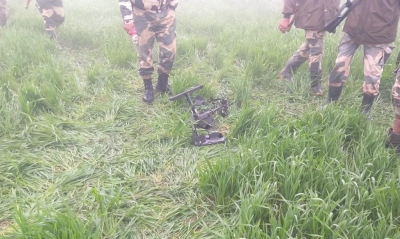 Drone incursions from Pakistan have been rapidly increasing and are being witnessed on the Bharat-Pakistan International Border almost every day. In recent months, the Border Security Force (BSF) has recovered a large quantity of drugs and weapons sent through drones from the borders of Punjab and Jammu.

According to government statistics, drone infiltration from Pakistan has doubled in 2022 as compared to 2021. Containing the infiltration attempts in 2023 is being seen as a big challenge for the security forces.

Recently, Congress Rajya Sabha MP Rajeev Shukla expressed concern about the increasing drone infiltration. He said in the House that a large number of drones were being sent from across the border, especially in Punjab and Jammu and Kashmir.

He added that the drones shot down by the forces were found to have Chinese technology. Shukla, while referencing statistics said that the rate of shooting down drones was very low. He demanded that the government think about the capability and effectiveness of the anti-drone system.

Union Home Minister Amit Shah has also discussed this several times in meetings with the security agencies and officials from the border states. According to available information, 79 cases of drone infiltration were detected in 2020, while there were 109 cases in 2021, which have increased to more than 270 in 2022. Out of these, more than 220 were in Punjab and around 25 in Jammu.

The BSF has shot down more than 20 Pakistani drones so far in 2022, as compared to only one drone in 2021. In such a situation, there is a need to take concrete measures to achieve more success in dealing with the challenge.

The total length of the international border between India and Pakistan is 2,900 km, which is protected by the BSF. The BSF has installed anti-drone systems along the India-Pakistan borders to prevent drone infiltration. Their number will be further increased in the coming days to help the jawans to jam and shoot down the drones.

According to information, Rs 30 crore is being spent by the BSF to further strengthen the systems at the borders. Along with this, the installation of 5,500 additional cameras has also started to monitor border infiltration and drone activities.

BSF DG Pankaj Kumar Singh recently said that Bharatiya drones are being used on a large scale to strengthen day-night patrolling. Simultaneously, the help of the state police is also being taken to stop smuggling. He added that anti-drone technology is being used at the border, but it was not advanced enough to cover the entire western sector. Singh stated that he had been talking to several Bharatiya companies to use the technology in sensitive areas.