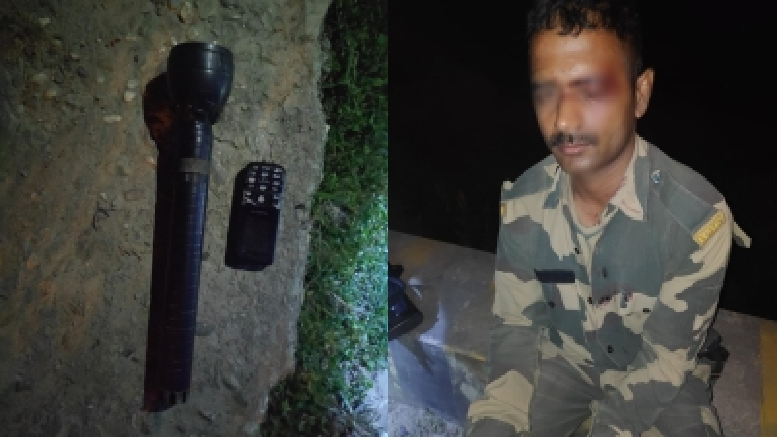 A group of Bangladeshi smugglers assaulted one of the Border Security Force (BSF) personnel while trying to pick some suspected bundle from near the International Border (IB) in the Bharatiya side of West Bengal and fled.

The incident took place around 9.30 p.m. on Sunday near Border Outpost (BOP) Narayanganj in Coochbehar sector while the BSF troops were performing duty ahead of the fence. The spot was around 250 metre from the IB and at a distance of 3,400 metre from the BOP.

The BSF said that the incident happened after some Bharatiya smugglers disconnected the electricity supply to switch off the Border Fencing Lights (BFL) so that they could conceal their movement and reach up to the International Boundary Border Fence (IBBF) to throw a bundle of illegal objects.

“The BSF team simultaneously observed movements of five to six Bangladeshis in two groups ahead of IBBF and saw them approaching towards Indian side while remaining concealed in the paddy field to collect the bundle thrown by Indian miscreants. The BSF team lobbed one stun Grenade at one group and fired one Pump Action Gun (PAG) round on the other group.

In reverse reply, the group of smugglers charged aggressively towards BSF troops and assaulted one of the BSF personnel with their torch hitting on his left eyebrow, said the BSF.

“As other BSF personnel rushed closer, the smugglers fled away from the spot.”

Injured BSF person has been evacuated to Dinhata government hospital for further treatment.

Upon search, troops recovered one mobile, two sim cards of Bangladesh and torch.