After the witch hunt on Hindu run schools in Tamil Nadu, the vendetta politics has come back to bite Christian institutions. A renowned Christian College in Tamil Nadu is facing charges of sexual harassment. Female students of the Tamil department in Bishop Heber College have filed a 4 page complaint against their Head Of the Department.

Post graduate students of the department have levelled a number of charges against Paul Chandra Mohan, the HOD, and an assistant professor Nalini Sundari Andrews. In their 4 page complaint, they have detailed the kind of harassment they faced at the hands of Paul Chandra Mohan. As per their accounts, he continuously harassed them by talking vulgarly, touching them inappropriately and forcing them to be in his presence in his office.

He would sit near the girls and touch their legs in an arousing manner. Sometimes he unbuttoned his flies and behaved in an obscene way in front of the girls. He would ask them inappropriate questions like “How do you feel when you see lovers in the park?”, “How would you feel in those 3 months in between your engagement and marriage?”, “Have you seen newly weds riding a two-wheeler? Have you imagined yourself in that position? How do you feel about that?”. 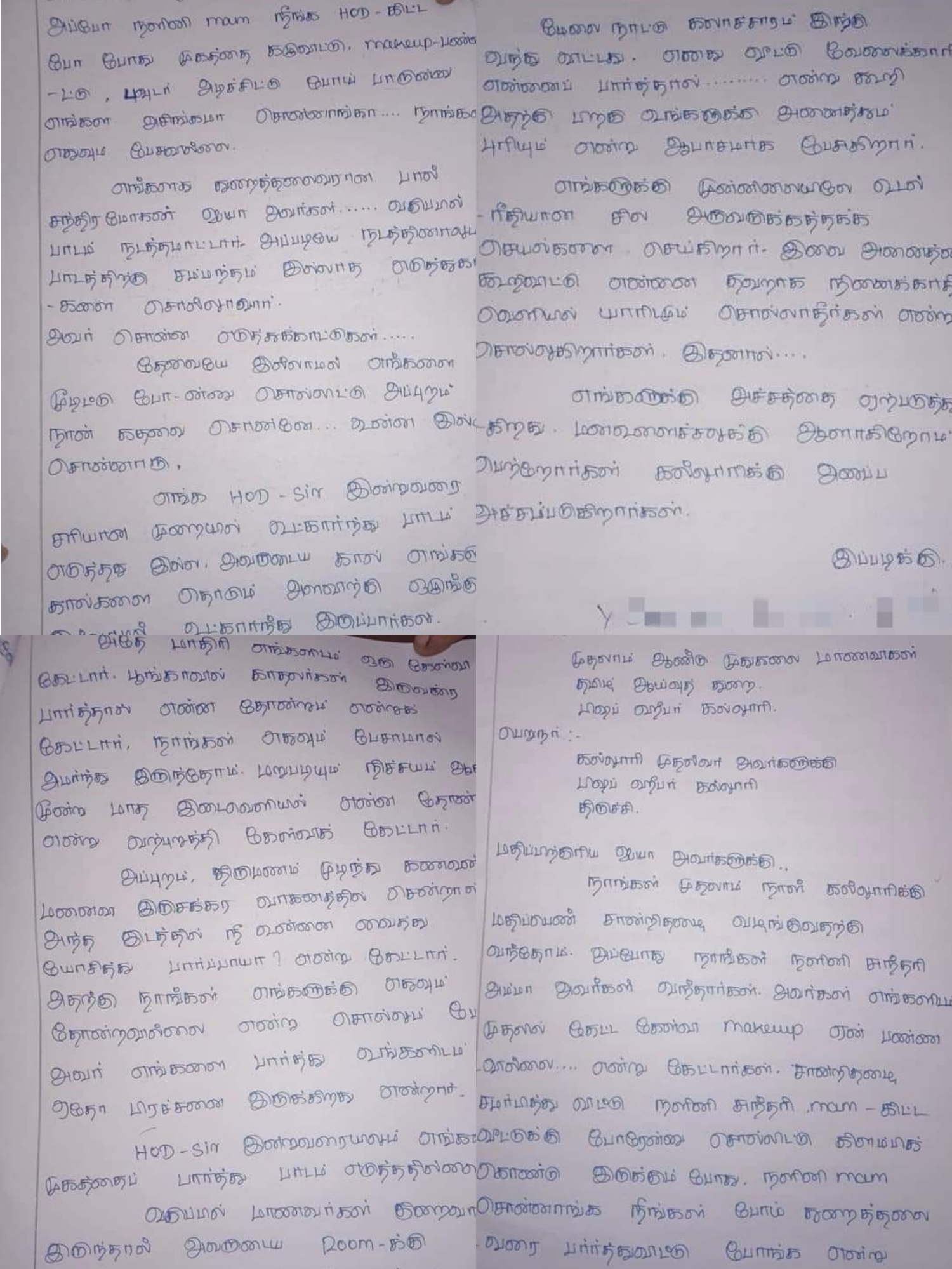 Students have accused him of never looking at their face while in class and using double meaning phrases most of the time. He also said “Western culture is here..my maid, when she sees me..you would understand what happens after that wouldn’t you?” and used vulgar language to describe the scenario. When they didn’t react to this kind of provocation he said that there is something wrong with the girls.

Shockingly, instead of helping the students to fight this harassment, Nalini Sundari, the female assistant professor, acted as an aide of Paul Chandra Mohan. She would ask the female students to wash their faces and wear makeup while visiting the HOD in his office. She also scolded them for not wearing makeup. Paul had the habit of calling the female students to his office when they were in less numbers and harassed them in the close quarters.

Paul was suspended from the college for sexually harassing hostel students in 1997. Later he pleaded that he cannot take care of his wife and 2 children without the job and was roped in again a few months later. He was suspended again for 6 months when he wrote eulogies about Nalini Sundari. In 2015 when he was to be promoted to be the HOD, his sex tapes with a fellow staff member surfaced and his promotion was withheld.

The sexual harassment complaints on Paul Chandra Mohan has come out only after they threatened to go to the media. When they filed a complaint with the principal Paul Dhayabaran, they were assured of an investigation. However nothing came out of it and only after their threat a committee was formed which has recently submitted its findings to the management. As the issue has gone viral in social media, the college management has been forced to suspend Paul Chandra Mohan and Nalini Sundari as an interim measure.

Bishop Heber College is an autonomous institution run by the Church of South India’s Tiruchirapalli-Thanjavur diocese. It comes under the purview of the bishop of the  diocese. He will be the decision maker in this regard as the Chairman of the College Governing Board. It is a matter of fact that bishops like Franco Mullakkal are accused of raping and sexually abusing nuns and women followers. Catholic Church is facing suits all over the world for sexual abuse of children and women.

Now the question is how will a bishop act in a nonpartisan manner in this regard. It is to be kept in mind that Paul Chandra Mohan has indulged in the same kind of crimes in the past but was given chances again and again. Will the TN government take over the institution with such questionable standards?