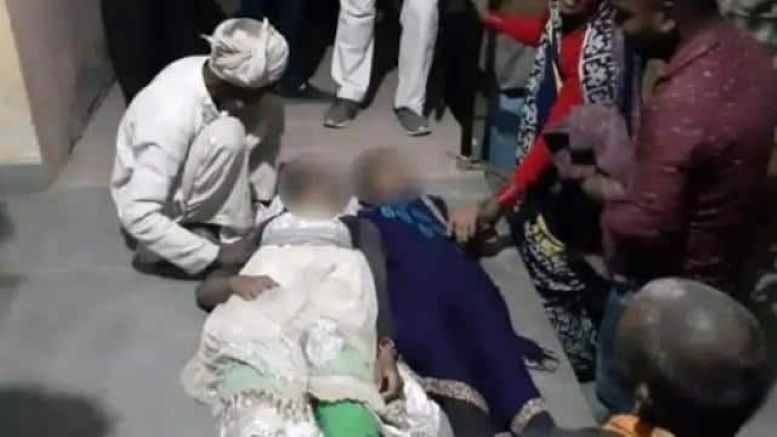 The death of two Dalit girls in Unnao under mysterious circumstances has led to a misinformation campaign by media and political parties. The facts that have emerged during the course of the investigation indicate that there is a deliberate attempt to foster caste hatred and malign the image of CM Yogi Adityanath-led UP government keeping in view the upcoming assembly elections.

As per latest reports, a Dalit youth from a neighboring village has been arrested along with an accomplice for poisoning the girls as he was furious at one of them for spurning his proposal.

Bodies found in the field

The incident occurred in Unnao district’s Baburha village that is located in Asoha block. As per the family members, the three girls had headed out together to collect fodder. However, a little later the girl’s uncle received a call stating that the girls were lying unconscious in the field.

The family then rushed the girls to the hospital where the doctors declared two of them to be dead and the third to be critical. The third girl continues to struggle for her life in a critical condition at Kanpur’s Regency Hospital. CM Yogi Adityanath announced that the expenses for the girl’s treatment would be borne by the state government.

The government had constituted a panel comprising of four doctors to conduct the post-mortem. According to the post-mortem report, the girls died due to poisoning. The panel concluded that there was poison in the food consumed by the girls 6 hours earlier which led to their death. Further, it was also confirmed that there were no injury marks on their body.

It must be mentioned here that the post-mortem was conducted by the panel in the presence of an additional magistrate and the entire process was videographed. Chief Medical Officer (CMO) Dr. Tanmay Kakkad said that food from the viscera and intestines has been sent to the lab for testing. Nail and hair samples have been sent for the DNA test.

The parents of the dead girl have issued a statement on the issue. The girl’s mother said that all three girls were found unconscious in the field. She also categorically denied that the hands and feet of the girls were tied. The girl’s father has demanded that the perpetrators be caught at the earliest and punished.

Police officer Arvind Singh said that there are no injury marks on the bodies of the girls nor are there any visible marks of them being tied up. Further, it has come to light that the youth who was the first to reach the crime scene and happens to be their relative has been missing ever since. A case has been registered against unknown persons under Sections 302 and 201 of IPC.

Deaths politicized, Hindu-haters get to work However, ever since the news about the tragic deaths broke, political parties have rushed to politicize the issue with Samajwadi Party (SP) calling for a CBI (Central Bureau Investigation) probe in this case. Bhim Army’s Chandrashekar Azad Ravan tweeted demanding that the post-mortem be conducted by an AIIMS panel of which at least half the doctors were Dalits.

AAP’s Sanjay Singh, Rahul Gandhi, Om Prakash Rajbhar who has joined hands with Owaisi, BSP Supremo Mayawati, Kafeel Khan, Mumbai’s Tipu Sultan Party, and AAP minister Rajendra Pal Gautam were some of the other politicians who entered the fray to politicize the issue. Not to be left behind, even so-called actress Richa Chadha said that Unnao is hell for females. Needless to say, all of them were reacting even before the investigations got underway in an attempt to project this as a ‘caste atrocity’ case and malign CM Adityanath. There was plenty of fake news circulating on social media including that by Barkha Dutt’s The Mojo Story. To curb the misinformation campaign, the CM Yogi Adityanath government has begun cracking down on social media offenders.

The Unnao police, on Sunday, lodged an FIR against eight Twitter handles and its users, including @themojostory run by Barkha Dutt, on charges of spreading misleading information in connection with the case. Earlier, on Saturday, former MP and Congress leader, Udit Raj, had been booked by Unnao police for spreading misinformation through his tweet.

Superintendent of police, Unnao, Anand Kulkarni said, “All those who tried to flare up tension and disturb harmony through different social media platforms will not be let off. We have lodged an FIR and will conduct a probe into the tweets. The misinformation was deliberately spread by people associated with parties, units and groups which are trying to discredit the ruling government and disturb the prevailing law and order.”

The SP said despite the post-mortem examination ruling out sexual assault and injuries on the bodies of the victims, some people and parties having vested interests, continued to spread misinformation that the girls were raped.”

Those who are shedding copious tears merely to extract political mileage out of the situation didn’t even spare a thought for 17-year-old Hindu girl Neetu who was bludgeoned to death in Delhi’s Rohini by her groomer Laik Khan in Delhi’s Rohini. Since the agenda is to whip up caste sentiments like the Hathras case, the chest beaters are raising the Unnao case while maintaining a convenient silence in the case of Neetu.