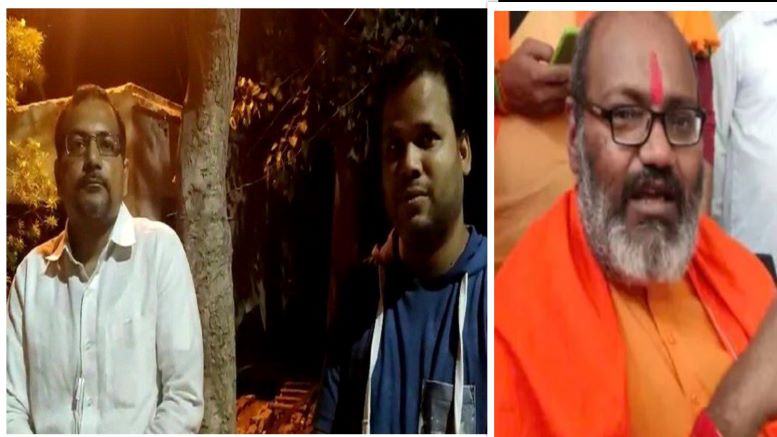 The involvement of a Hindu convert to Islam in the Swami Yati Narsinghanand murder conspiracy has come to light. He has been identified as Nagpur resident Vipul Vijayvargiya who converted to Islam having married a Muslim woman named Ayesha and had changed his name to Ramzan. He was allegedly provoked by Vijaynagar Sector 12 resident Salimuddin, believed to be Vipul’s trainer.

On 2 June, Ramzan and his brother-in-law Kasif entered the Dasna Devi Temple premises under the pretext of wanting to debate with Swami Yati Narsinghanand Saraswati, the head priest of the temple. They had entered their names as Vipul Vijayvargiya and Kashi Gupta instead of their actual names Ramzan and Kasif.

The two were taken into custody on 8 June by security agencies after three surgical blades, a vacuum therapy machine, 2 iron rods, chemical, religious books, and other items were recovered from their bags. Masuri police under whose jurisdiction Dasna Devi Temple falls registered a case against the duo for cheating by hiding their identities and sent the two to jail.

Both were taken into five-day police remand for questioning. The remand period has been extended till 15 June. On Saturday, ATS also interrogated Kasif and Ramzan. During interrogation, the police learned of Salimuddin’s role in the plot. Ramzan received Urdu and Unani training from Salimuddin and it was the latter who provoked Ramzan to take Kasif along.

It also came to light that the extremist organization with which Ramzan is associated brainwashed people into converting to Islam by luring them with promises of jobs, marriage, and financial assistance among other things. The organization generally looks out for people who are financially weak and unemployed as it is easy to brainwash them.

Vipul has been working for the organization which is said to have converted numerous people across the country for some time now. He was allegedly brainwashed by Mumbai resident Maulana Munjir who put him in touch with Ghaziabad resident Salimuddin who besides giving him training also got him converted to Islam after which Vipul became Ramzan.

Salimuddin also got Ramzan married to his friend’s daughter Ayesha. It must be mentioned that both Salimuddin and Ayesha’s father have been office bearers of the extremist organization. He helped Ramzan set up an Unani clinic in Nagpur and subsequently brainwashed him into propagating and converting people to Islam.

Police have taken Salimuddin into custody and sent him to prison. The Police’s plea in the court for custodial interrogation of Salimuddin has been scheduled for today following which various security agencies would interrogate him.

In light of the revelations, security agencies are keeping a close watch on those close to Ramzan, Salimuddin, and Kasif. Additionally, a thorough investigation is being conducted into the links of the Nagpur-based extremist Islamist organization.

Some of the aspects security agencies are looking into include:

An assassination bid on Swami Yati Narasinghanand Saraswati was foiled by Delhi Police who arrested a 24-year-old Jaish-e-Mohammad (JeM) terrorist identified as Mohammad Dar alias Jahangir, from a hotel in Delhi’s Paharganj that led to the unearthing of the assassination plot.

There have been several calls for beheading Swami Narsinghanand Saraswati from extremist Islamist organizations. Many Islamists conducted “sar tan see juda” rallies and beheading calls have been made by Islamists across the country including one by AAP MLA Amanatullah Khan.