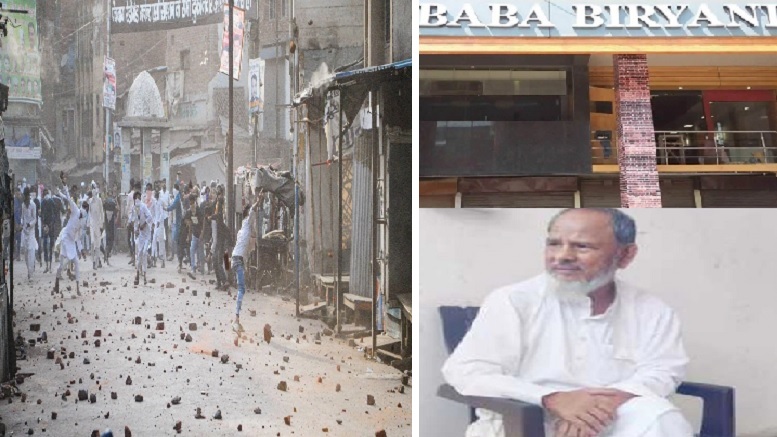 Baba Biryani House owner Mukhtar Baba has been arrested for funding and instigating the Kanpur violence. As per reports, he instigated the violence to ‘save’ his building that had been illegally constructed on the land belonging to the Ram Janaki Temple.

He allegedly wanted to send across the message that if his restaurant was bulldozed then there would be violence in the area. Baba is said to have given money to Hayat Jafar Hashmi, the main accused of the Kanpur violence. It has further come to light that a Pakistani resident had sold the Ram Janaki temple land to Baba. During his term as the District Magistrate (DM), Vishakh G Iyer had directed the then Sadar SDM Anuraj Jain to probe the matter on the basis of a complaint filed by an organization.

Investigations revealed that one Abid Rahman owned a house (99/14) in Beconganj’s Dr. Beri Crossroad. He illegally encroached upon the land of the Ram Janaki mandir that was located next to his residence. In 1982, Rahman converted his property 99/14 to 99/14-A and sold both his house as well as the temple to Mukhtar Baba.

Mukhtar, in turn, got a deed of gift (Hebanama) made in his mother’s name and subsequently got the property transferred to his name. The 18 Hindu stalls outside the temple were brought down one after the other and erected the Baba Biryani restaurant on 400 square yards of the encroached temple land.

The investigation by the district administration has confirmed that the restaurant still bears signs and symbols of the temple. The administration’s probe report has been submitted to the government. A showcase notice has been sent to Mukhtar Baba. Reports say that the Biryani House can be bulldozed anytime and evicted from the property.

When the investigations began, Baba funded several accused including Hashmi and tried to create unrest in the area so as to send a ‘message’ to the administration. He wanted the administration to know that if they attempted to bulldoze his restaurant then there could be violence in the area at any time. However, the police were successful in unmasking Baba and his sinister plans. The police gathered evidence against him and took him into custody. The police are now probing how much funds were spent by the accused to instigate the violence.

The city corporation’s Panchshala Registry shows that the temple was managed by Bhagwandeen who was the manager of the Ram Janaki Temple trust. According to the registry, Bhagwandeen managed the affairs of the trust from 1927 to 1953. The trust had 18 stalls under it that were located within the temple premises. These stalls were run by Hindus.

The vendors sold various items such as puja material, jewelry, readymade clothes, prasad, etc. The register lists the names of the 18 vendors from 1927 to 1938. Manna, Nathu, Rambharose, Gajju, Natha, Satnarayan, Bhansidhar, Mahadev, Basesar, Mishra, Chedda, Vishwanath, Ajodhya, Keshav, Sukhlen, Dharma, and Makhat. Even though Baba managed to remove these Hindus from the site, the documents still bear their names.

It has further come to light that from 1948-53 Bhagwandeen’s name appears in the column for the old manager while that of Maula Baksh appears as the new manager alongside. However, the city corporation authorities haven’t mentioned any reason for having registered Maula Baksh’s name. Bhagwandeen’s name has been completely removed from the register from 1953-58. Subsequently, Maula Baksh’s son Abid Rahman’s name was included in the Panchshala register in 1968 and remained till 1978.

In 1978, Haji Mohammad Ishaq Baba’s wife Hajra Khatun’s (Mukhtar Baba’s mother) name was included in place of Rahman. By now all the tenants had been forcefully evicted from the land. The property was registered in Rahman’s name when he was a minor. Since Rahman moved to Pakistan after he became a major, the property is being considered enemy property as per the provisions of the Enemy Property Act, 1968. It has now been established beyond doubt that it is on the land of the Ram Janaki Mandir that Baba Biryani House now stands.