UK Court’s indictment of Katju and Thipsay in extradition case 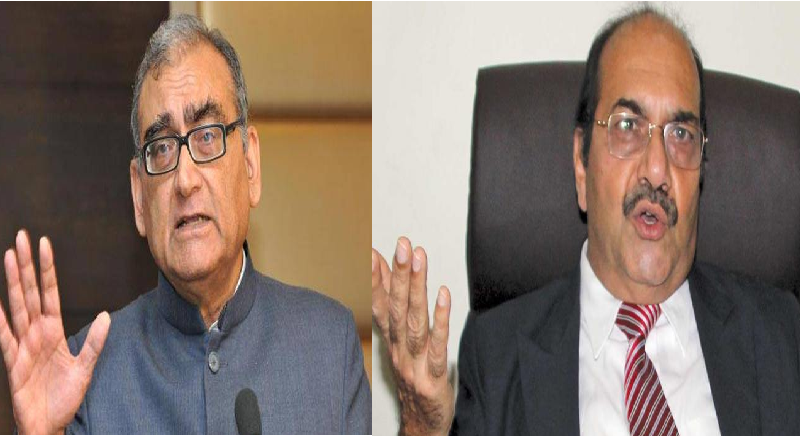 We recently went through an important reporting of the Live News Network on 25th February, 2021 elaborating as to how the UK court in London took a very serious view of the issue and cleared Nirav Modi’s extradition to Bharat besides castigating Justice M. Katju and Justice Abhay Thipsay’s deposition before the court. It made history by its observations about the role and conduct of the senior judges of the Supreme Court of Bharat and Bombay High Court respectively.

During the period of UPA regime from 2004 to 2014, a number of bank frauds took place in Bharat. Most of these frauds involved the highest in status and position in power politics, bank hierarchy and business circles. It is assumed that the finance ministry higher ups were akin to such frauds and the Ministers in charge were aware of the loot of public exchequer money at will. Two of such big frauds involve Vijay Mallya and Nirav Modi who have been declared fugitives by the courts in Bharat.

Nirav Modi is a luxury diamond jeweller and designer who was ranked 57 in the Forbes list of billionaires in 2017. He is also the founder of the Nirav Modi chain of diamond jewellery retail stores. Modi is the Chairman of Firestar International, the parent of the Nirav Modi chain, which has stores in key markets across the globe. He has 16 stores in diverse locations such as in Delhi, Mumbai, New York, Hong Kong, London and Macau. He is currently in the United Kingdom and is seeking political asylum in Britain.

The UK Court rejected Justice Katju’s and Justice Thipsay’s opinion against Bharat’s Judiciary in Nirav Modi extradition case and also allowed extradition of Nirav Modi to Bharat for which the UK government has to take the necessary steps. Justice Katju had deposed before the UK Court as an expert witness for Nirav Modi, opposing the Government of Bharat’s plea for extradition on the ground that he was unlikely to receive a “free and fair trial in India”.

The written submission filed by him in the case states that Modi was subjected to “media trial” in Bharat and that in such a “hostile atmosphere”, he was unlikely to receive a free and fair trial in Bharat. The former Supreme Court judge also deposed that judiciary in Bharat was highly ‘politicized and corrupt’.

The fraud committed through the Punjab National Bank involves Nirav Modi directly. This scam relates to fraudulent letter of undertaking worth Rs 10,000 crore issued by the bank. The key accused in the case were jeweller and designer Nirav Modi, his maternal uncle Mehul Choksi, and the other relatives and some PNB employees.

Bankers used fake Letters of Undertakings (LoUs) at PNB’s Brady House branch in Fort, Mumbai. The LoUs were opened in favour of branches of Bharatiya banks for import of pearls for a period of one year, for which Reserve Bank of India guidelines lay out a total time period of 90 days from the date of shipment. This guideline was ignored by overseas branches of Bharatiya banks. They failed to share any document/information with PNB, which were made available to them by the firms at the time of availing credit from them.

Nirav Modi got his first fraudulent guarantee from PNB on March 10, 2011 and managed to get 1,212 more such guarantees over the next 74 months. The Enforcement Directorate (ED) recovered bank token devices of the foreign dummy companies used by the fugitive diamond trader to transfer the fraudulent funds.

The probe agency found that Nehal Modi, brother of Nirav Modi had destroyed the devices and had even secured a server located at United Arab Emirates (UAE) soon after the scam broke out. These dummy firms had been receiving the fraudulent PNB LoUs and were based out in British Virgin Island and other tax havens. The enforcement agency has so far seized movable and immovable properties to the tune of Rs 2,362 crore in the PNB fraud case.

On 29 January 2018, PNB lodged an FIR with CBI stating that fraudulent LoUs worth Rs 2.8 billion (Rs 280.7 crore) were first issued on 16 January. In the complaint, PNB had named three diamond firms, Diamonds RUs, Solar Exports and Stellar Diamonds. As of 18 May 2018, the scam ballooned to over Rs 14,000 crore.

District Judge Sam Gooze of Westminster Court, London, who heard the Nirav Modi case, not only discarded Katju’s evidence but also made certain sharp observations against the former judge. The UK judge said that he attached “little weight to Justice Katju’s expert opinion” as it was “less than objective and reliable”.

“Despite having been a former Supreme Court judge in India until his retirement in 2011, his evidence was in my assessment less than objective and reliable. His evidence in Court appeared tinged with resentment towards former senior judicial colleagues. It had hallmarks of an outspoken critic with his own personal agenda”.

The Court took exception to Justice Katju going to the media before giving evidence, and said that it was a “questionable conduct for someone who served the Indian Judiciary at such a high level”. Despite making commentary about the fairness of any trial process in Bharat, he accepted on a number of occasions in cross-examination that he had not considered the evidence and it is evident from his report that he certainly had not considered the full requests from the GOI.

It also noted that though Justice Katju was critical of former CJI Gogoi accepting a Rajya Sabha nomination after his retirement, Justice Katju himself was a beneficiary of post-retirement job as he was appointed the Chairperson of the Press Council of India. Not stopping there, the UK judge further said, “Despite being highly critical of the “trial by media” and its impact on NDM’s case, he (Katju) took the astonishing decision to brief journalists in relation to the evidence he was giving in these proceedings, creating his own media storm and adding to the heightened media interest to date”.

Katju’s comments such as “90% Indians are fools”, “gay relationships are humbug and non-sense”, “women who remain single are prone to psychological problems”, “50% of judges are corrupt” etc., were brought up by Bharatiya Government’s lawyers. Katju stated that because the BJP cannot solve the economic crises it is just like “Hitler and the Jews”, “Nirav Modi is the Jew that must be blamed for all the problems in India”. When challenged about his imputations about the investigation, he stated that he was not commenting on the merits of the case but that NDM cannot get a fair trial”.

The UK Court also rejected the expert opinion given by Justice Abhay Thipsay, former judge of the Bombay High Court, regarding the non-applicability of the offence of cheating against Nirav Modi. “I attach no weight to his opinions set out in his reports and in oral testimony”, the Court said. Justice Thipsay had refused to give further evidence in the proceedings after his participation in the case drew criticism from the Union Law Minister Ravi Shankar Prasad. Therefore, the Court said that his evidence could not be subjected to scrutiny.

He is aware of the nature and interest in these proceedings. He would equally be aware of his own political connections to Congress which it transpires he joined after his retirement. However, he also engaged and courted with the media himself. His additional reports and opinions subsequently submitted by the defence have not been subject to scrutiny.

His unwillingness to give further evidence in these proceedings, simply because he did not get the protections which in my view there was no sound basis to grant, meant his opinion went unchallenged by the GOI. There has been no ability for the Court to further scrutinise his expert testimony. Overall, these factors have the effect, in my assessment of nullifying any weight I would have attached to his evidence”.

The Court opined that there was a triable case against Modi. Rejecting all grounds of challenge raised by Modi, the UK Court forwarded the case to the Secretary of the State to decide as to whether Nirav Modi is to be extradited. Modi has also been notified of his right to appeal within 14 days, and the decision on extradition can’t be made until the appeal is disposed of, provided he exercises the right to appeal within the said period.

After the reports of the scam surfaced in February 2018, Nirav Modi fled Bharat in May 2018, along with his relative Mekul Choksi. In March 2019, he was arrested in London by UK police at the request of Bharatiya authorities. This judgement may, in due course of time, give government of Bharat a huge leverage vis-a-viz their counterparts in London to take this issue to the logical conclusion.

Choksi produced before magistrate on wheelchair, to face charges of illegal entry into Dominica