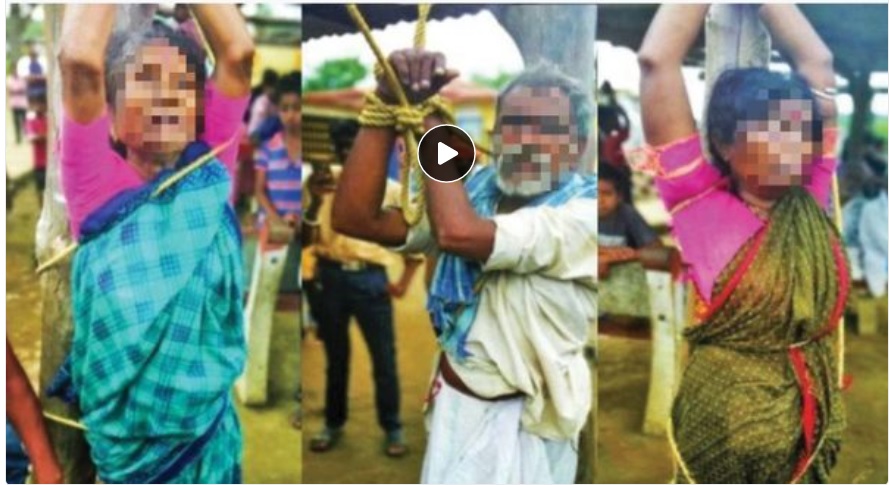 Seven members of two families were tied to wooden poles of a shed and beaten mercilessly by a mob in village Wani (Khurd) in hilly Jiwti tehsil, Chandrapur district of Maharashtra on Saturday. They were attacked for allegedly practising black magic, and thrashed for hours till police came to their rescue.

The families who were attacked belong to a Scheduled Caste (SC) community, while those attacked them are also reported to be SC, albeit from a different sect. The attack was planned after four women, claiming to be possessed by spirits, named the Kamble and Huke families on Muharram, a Muslim festival which was celebrated on Friday.

It is alleged that Maharashtra police took no action till Sunday evening, and began rounding up operations only after Sunday midnight. Now, heavy police force has been deployed in the village.

“The villagers held a meeting on Friday night and hatched a plan against us. A group marched to our house on Saturday morning, asking us to reach the village main square, as we were named for practising back magic by persons possessed by spirits. We agreed to go as we are innocent,” said victim Prayagbai Huke.

She said four women allegedly possessed by spirits were making a scene at the square. They were raving and babbling nonsense, and struck some of the Kambles and Hukes with sticks or threw handful of soil. This, people said, showed the spirits have nailed these people and mob hysteria took over. The Huke and Kamble family members were then thrashed.

Subdivisional Police Officer (SDPO) Sushilkumar Nayak claimed the situation is under control now. “We have arrested 13 in connection with the mob assault and more arrests are likely,” he said. Those involved in the thrashing of Huke and Kamble families also belong to dalit community, but from different sect, he added.

The arrested were identified as Sugriv Shinde, Datta Kamble, Prakash Kotambe, Santosh Panchal, Dadarao Kotambe, Balaji Kamble, Amol Shinde, Govind Aerekar, Keshav Kamble, Suraj Kamble and Datta Bhalerao. The four women who named the victims for practicing black magic while allegedly in possession of spirits have been admitted at psychiatric ward in GMCH Chandrapur. These women are likely to be arrested on discharge.

The festival of Muharram is celebrated by Shia Muslims to mourn the death of Imam Hussain, the grandson of Islam’s Prophet Mohammad, who was killed in the battle of Karbala. Muslim men and boys whip themselves into a frenzy, using knives and chains to self-flagellate, bleed and mourn.

It is still not clear whether the two families were attacked as part of some pre-planned conspiracy. However, two things stand out in the reporting of this issue:

1.) The MSM news headlines have projected this as a ‘Dalit atrocity’ issue, overlooking the fact that those accused are also from an SC community.

Sadly, this approach of looking at crimes from a casteist and political lens has taken deep roots in society. Such misleading framing by media led many to initially mistake this as an atrocity by ‘upper castes’ on ‘Dalits’, which serves their intended purpose of projecting Hindu society as inherently oppressive – the fact that the accused were also from an SC community was buried deep inside the article. Also, the same insistence on highlighting ‘Dalit’ identity of victims goes missing when SC Hindus are targeted by Islamists, a phenomenon which is on the rise across the country and the most recent example of which was seen in the WB post-poll pogrom.

2.) Belief in ‘black magic’ and ‘spirit possession’ has also been painted as an exclusively Hindu ‘superstition’, overlooking the fact that such belief systems are more widespread among followers of Abrahamic religions like Islam and Christianity. Belief in occult practitioners, tabeez (lucky amulets), jadu-tona etc. is deeply-rooted among subcontinental Muslims and many Muslim pir/babas/fakirs are often mis-represented as Hindu sadhu/tantriks by media. Whereas exorcism i.e. expulsion of a supposed evil spirit is so mainstream among Christians that there are many Hollywood movies dedicated to this topic alone.

Yet, if one were to believe the so-called anti-superstition/rationalist NGOs or MSM in Bharat, he/she would think that all ‘superstitious’ practices are somehow Hindu in origin! The whole concept of disparaging certain beliefs as ‘superstition’ while holding others to be somehow legitimate, betrays an Abrahamic exclusivist mindset. Its only when a belief leads to actual physical harm to someone, or genuinely poses a risk to public order that the law needs to step in, like it correctly did in this case from Chandrapur.

The BJP’s OBC gambit may hurt in the long run