The consequences of political Islam and Halal in Kerala 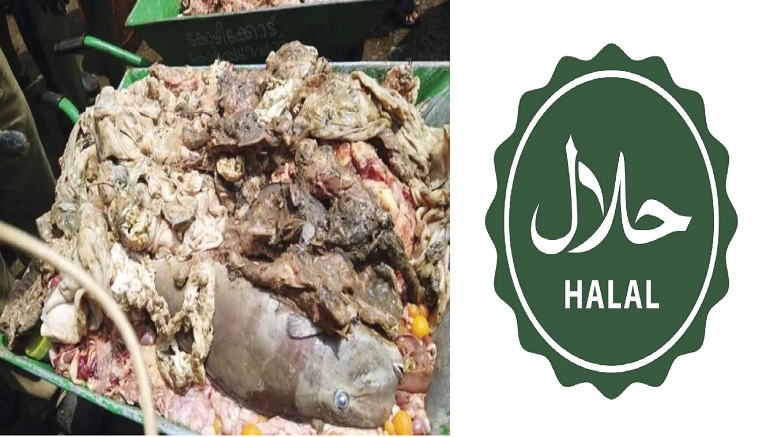 Let us take a closer look at the economics of Halal and its relation to politics in Kerala. Even as incidents of food poisoning especially amongst youngsters spread across Kerala, the authorities are letting off restaurants by ordering them to pay petty fines.

On November 17, municipal health department officers raided eateries in and around Ettumanoor Shiva temple in Kottayam. Ettumanoor is an important temple in the Sabarimala itinerary. Rotten rice, meat, fish and rotis were seized from 8 hotels. Health Inspector Attlee P. John said that he had fined them Rs.2,000/- each and added that the licenses of repeat offenders will be canceled.

In early 2015, there were more than 36500 restaurants (excluding the high-end ones and the way-side eateries). The pandemic and the subsequent reverse migration only added to this number. Many have flouted rules by selling stale food and paid fines, but not a single one has even been shut down due to lack of hygiene or since the eatery could not pay the fine.

Is it so easy to bypass the laws in Kerala or is this the best that the government can do for its citizens? It is worth noting here that most eateries in Kerala are Halal ones and the Halal controversy rages across the state after Islamists were seen blowing/ spitting into food meant for the masses, and attacking those providing non-Halal options.

Chief Minister Pinarayi Vijayan recently announced that halal means ‘clean food’, ‘fit for consumption’. This proclamation came following complaints from the Kerala Hotel and Restaurant Association (KHRA) about a ‘smear campaign’ by the Sangh Parivar to spread lies about halal.

KHRA even wanted legal action using cyber laws to punish those spreading ‘false narratives.’ Secularism too was thrown in when they said that all communities are employed in eateries, but the ground reality is that only an animal butchered by a Muslim can be considered halal, which means non-Muslims in the meat trade are rendered jobless as Halal becomes the norm. Even the halal certificate is given by hardline Islamic organizations like JuH (Jamiat-ulema-e-hind), so they can impose their diktats on even non-Muslim restaurant owners. That part was cleverly hidden and went unmentioned.

When you control both the branding and the perception management, narratives like common sense, impact on small business owners, economic discrimination and denial of choice, health effects of the spit/blow practice, heavy losses during the pandemic and ignorance over halal are effortless to handle. For those who doubted political Islam and its deep-rooted economics, this is an excellent case study.

Back in the late 1990s, Islamists used to visit Hindu hotels, order lots of food and walk out once the food arrived citing non-compliance with their halal policy. Instead of using the same tactics, secular Hindus went in for halal certifications back then and they are now paying the price.

This time around, a couple of admissions from those who were in denial about the spit/blow practice till now did happen. One was that a particular cleric did actually blow into food in what is called an Uroos ritual. Some claimed that Islam’s prophet does not ask anyone to blow/spit into food to ‘bless it’.

But then again, these decrees never explained why there are dozens of videos where a particular community is actively engaged in spitting on food – whether biryani, rotis, fruits etc.

Ettumanoor raids also found that most eateries ditch their waste directly into public canals. Anyone who had used public roads knows this from the putrid smell that emanates from many hotel kitchens in Kerala. You just have to walk down the alleys behind those kitchens.

The government’s role in Halal restaurants became clear from the Food Safety Commissioner V R Vinod’s statement. He said that they do not come under the scope of his department. Vinod even added that he has never received a complaint about blowing or spitting into food meant for public consumption!

This is where the economics of halal and political Islam comes into play. It is also where the government seems evasive to say the least. All over Bharat, the situation remains the same since the state has nothing to do with halal certification and is controlled by a select few who are outside the purview of the secular state for all effective purposes.

On December 16, 24  National Cadet Corps (NCC) students at a camp in Kalamassery Government Polytechnic College developed food poisoning symptoms and were admitted to Government Medical College Hospital, Ernakulam. The NCC camp was attended by approximately 300 cadets and usually, the food (the cheaper the better) is bought from restaurants.

Many female students at the Aimfill International training institute in Palarivattom near Ernakulam fell ill after they were served contaminated food. BJP spokesperson and high court lawyer Adv. TP Sindhumol has asked the police to enquire as to how a known educational fraudster named Fazil Muhammed bin Basheer was being granted state funds to run the Deen Dayal Upadhyaya Grameen Kaushalya Yojana (DDU-GKY) affiliated institute for girls. The condition of many students from poor backgrounds was critical and Aimfill did not even pay for their hospital expenses.

The state government-owned Kudumbasree was receiving funds under the skill development DDU-GKY program, and they had appointed Aimfill. The central government was paying 2 lakhs for each student for a 6 months course that Aimfill was allegedly manipulating into a 3 month one, and even then sub-standard food was being served.

On November 21, it was reported that 14 girl students at a training center hostel under the DDU-GKY at Pantheerankavu near Kozhikode had to be hospitalized after consuming contaminated food. The ‘institute’  was located on the third floor and the hostel on the fourth. Young girls living in the hostel were being threatened by the college management that false ganja (marijuana) related cases would be lodged if they complained about the bad food or the even worse accommodation. Both

the students and distraught parents blamed the authorities for allowing such organizations to function without even basic amenities. Hundreds of them function all over Kerala and are run using central government funds.

November 13 saw reports of the death of a 2-year-old after he ate chicken dishes at a wedding at Narikkuni near Kozhikode. 11 children were admitted to the hospital and six of them were in critical condition with significant health problems. The food was bought from a nearby eatery and several elders too suffered from food poisoning.

32 students from the College of Veterinary and Animal Sciences at Pookode in Wayanad had to be admitted to the taluk hospital at Vythiri after suspected food poisoning at their hostel following which the college was shut down. Thankfully, many were discharged soon and this case was reported on November 5. Authorities tried to blame the drinking water.

The magnitude of the issue must be gauged from the fact that all the above cases pertain to just students and occurred over a period of just one month or so. Even if an eatery has to cater to a single Muslim the other customers are also forced to feed on halal, thus creating a monopoly for halal suppliers.

No one has been properly punished or even arrested yet in Kerala despite a rash of such food poisoning incidents.

These incidents shows us exactly why citizens no longer prefer eateries in Kerala. Considering the gravity of the situation, fines that at least match the ones that law enforcement squeezes out of a driver using a cellphone, should be introduced.