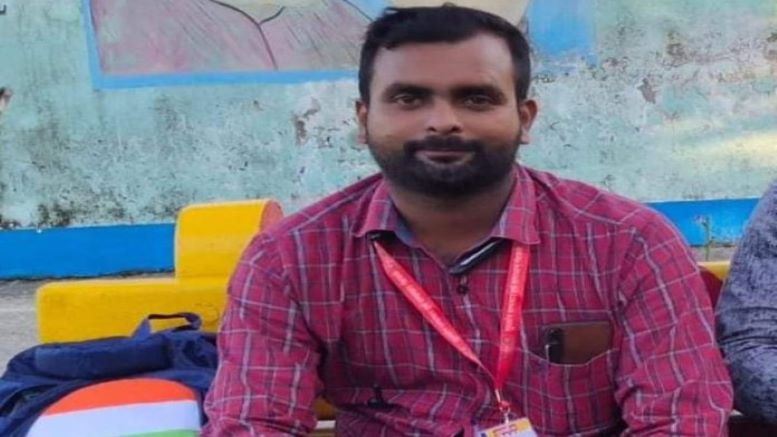 Manish resided at Paharpur Police Station’s Kotwa Panchayat and his father Sanjay Singh is an RTI activist and Chief Editor of a local newspaper. Sudarshan TV CEO Suresh Chavankhe tweeted on 11 August to inform of the murder “Sudarshan’s reporter Manish Kumar murdered. Mohammad Arsad Alam was arrested. The kidnapping took place 3 days ago, even after giving a complaint about the possibility of murder, the Bihar Police did nothing and kept waiting passively for the murder. we demand justice”.

As per reports, on August 8, Manish left home to attend a function in Math Lahoria Village of the Harsidhhi Police Station area. He went missing after that, and his mobile phone was switched off. Later, his bike was recovered from the Harsiddhi village. Manish was constantly getting threats to his life, and there was a land dispute going on. A complaint was filed over the dispute on July 25 by Sanjay at the local Police station.

After Manish’s disappearance, his father filed a complaint at Harsiddhi Police Station in which he named 12 persons, including two journalists identified as Mohammad Arsad Alam and Amarendra Singh.

While the Police were investigating, they got the information that locals have spotted an unidentified body. Police reached the spot and called Sanjay Singh to identify the body. As it was bloated and mutilated, Singh was able to identify Manish by the shoes. Reports suggest that Manish’s eyes were gouged out, and there were injuries on his face.

The police subsequently took Alam and Amarendra into custody in connection with the Sudarshan TV journalist’s abduction and murder on the basis of CCTV footage of the area. Areraj DSP Santosh Kumar was appointed to lead the investigation of the case.

Sudarshan TV CEO Chavankhe met Nityanand Rai, the Union Minister of State for Home, to submit a letter asking for a thorough inquiry into the brutal murder of Manish Kumar Singh. After his meeting, Chavankhe put out a tweet carrying the letter and said “Journalist Manish Kumar of Madhubani, Bihar has been murdered by jihadis who hate Sudarshan’s work”.

In his letter, Chavhanke has highlighted that Manish was on the radar of those who were corrupt and people harboring jihadi mentality due to his fearlessness. He further says that they learned of Manish missing on August 7 and added that the police took a lackadaisical approach when his father approached them to probe the case. The police instead told Manish’s father that Manish has probably disappeared with some girl and would be back on his own eventually.

The letter also alleges that Manish’s father has stated that the culprits have been arrested in haste so as to whitewash his son’s murder and that the real motive behind the journalist’s murder is being suppressed by the police. Manish’s father has said that a recent story that he was working on could be the reason for his murder, however, the police are not keen on investigating the same and are simply closing the case in haste without proper investigation.

Chavhanke’s letter states that Manish was working on a story relating to three major terror incidents in Bihar and probing their connection with places such as Areraj and Motihari. The three major terror attacks that he was investigating were the Banka Masjid blast, Darbhanga parcel blast and Siwan blast. Afzal Alam, employed as a journalist with Sanjay’s newspaper, learned about this and began raising constant questions regarding the same.

Manish’s father has alleged that ever since word spread about Manish having joined Sudarshan TV his enemies increased and that jihadi elements are involved in his murder. Chavhanke notes at the end of his letter that the same Jihadi elements who murdered Manish, according to his father’s statement, are also a threat to Sudarshan TV journalists across the country. In view of this, the Sudarshan TV CEO demanded an impartial probe into the murder of Manish.