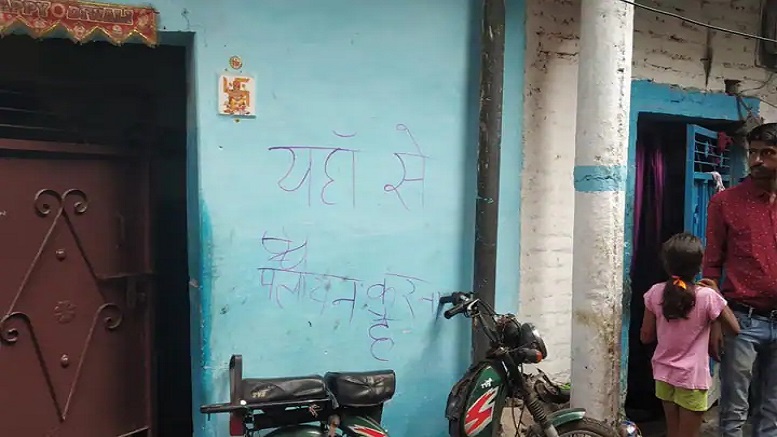 Recently, 10 Hindu families living in a small colony near Colonelganj in Kanpur scribbled handwritten messages on their front walls. They said that they are being forced to migrate from the locality after they resisted the conversion attempts of local Islamist goons who had delivered an ultimatum to ‘convert or leave’. The victims are being threatened that they will be ‘dealt with’ once the SP forms a government. UP elections take place next year.

Last Saturday, the goons indulged in an assault that has left vulnerable Hindu families living in terror ever since. Local mobsters started by molesting a young Hindu girl. When her brothers objected, the 12 strong mob entered their house, beat them up, and tried to rape the young girl.

A case was registered against 12 accused – 9 named and 3 unknown. Three of them – Rehman, Sahil, and Raja – were arrested. Locals alleged that following pressure from local Samajwadi Party MLA Amitabh Bajpai, two of the accused were released! When the victims approached the MLA he allegedly told them  that since they raise ‘Jai Shri Ram’ slogans and ‘do politics’, he would not help them. Bajpai is the Aryanagar MLA, a constituency ruled by the SP four times in the last five elections.

That is when the Hindu families decided to publicly announce that they would rather migrate in the interest of self-preservation.

Locals say that the Islamists gave them two options. Either convert to Islam or migrate. They say that they fear for their lives and their loved ones and will opt to migrate if security is not provided.

A local man named Aftab is at the forefront of this project to evict Hindus living in the rail tracks area of Colonelganj police station area, Kanpur. He has threatened Hindus that the Yogi-led government will soon be replaced by an SP one, and that he will have his revenge as soon as the Samajwadi Party comes to power.

There are serious allegations that the Aftab gang had openly declared that they will change the locality into a mini Pakistan. They degrade the Hindus as ‘Kaafir’ (infidels) and say that converting them to Islam will bring them glory/blessings. Various methods are used to terrorize and torment the Hindus. Diyas (earthern lamps) lit on Diwali are doused with water. Animal bones are thrown at Hindu homes. The 2019 Ganesh Pooja celebrations were disrupted. And now, a rape attempt was made on a young girl.

Police Commissioner Aseem Arun said that an FIR has been registered and that they are inquiring about the threats that the families received. But he did not provide information about why the two accused who were apprehended were let free.

He added that those who indulge in communalism will be booked under strict rules including the goonda act and the NSA. He tried to instill some confidence by saying that as citizens, one can live anywhere in Kanpur that one wants. However, will the police be able to provide meaningful protection to the persecuted Hindus, or will we see yet another Kairana repeat?

It seems that the targeted violence unleashed against Hindu supporters of BJP in West Bengal is having a knock-on effect. Even after dozens of people were lynched, hundreds of women and girls raped and molested, thousands of Hindus rendered homeless, neither state or central government, or the courts have provided any relief. This has quite likely emboldened the Opposition-backed Islamists and goons to try and intimidate Hindus in other states. It remains to be seen how the Yogi government deals with those looking to repeat the WB anti-Hindu pogrom.

Anti-conversion bill: Right to religion not right to convert