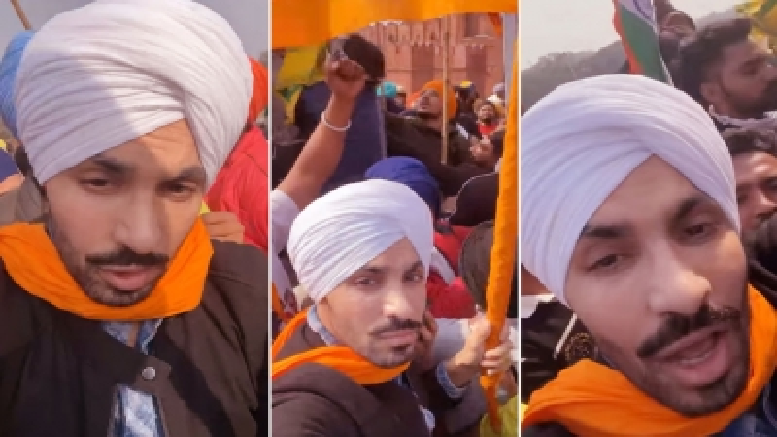 Punjabi actor Deep Sidhu, who was summoned by the National Investigation Agency (NIA) last week in connection with the Sikhs For Justice (SFJ) case, was among the group of farmers who entered the Red Fort on Tuesday and hoisted flags in the 17th century monument, even as violent clashes broke out in several parts of the national capital as the tractor rally by the agitating farmers went awry.

Hundreds of farmers riding on tractors, motorcycles and cars entered into the premises of Red Fort on Tuesday afternoon with the tricolour and flags of the farmers’ unions in their hands.

The farmers, who outnumbered the security forces and police personnel, soon climbed on the ramparts of the monument and hoisted their flags there.

Sidhu also did a Facebook live while hoisting the pennant from the ramparts of the Red Fort. In the video, Sidhu said in Punjabi, “We have only hoisted the Nishan Sahib flag on the Red Fort while exercising our democratic right to protest.”

Last week, the NIA had summoned Sidhu to appear before it in connection with its probe into the Sikhs for Justice (SFJ) case it had registered on December 15 last year.

Even the Samyukt Kisan Morcha (SKM) distanced itself from Sidhu and accused him of leading the farmers to the Red fort. The SKM said that Sidhu appeared on a stage on Monday night and gave a provocative speech promoting separatism to sabotage the farmers’ protest.

At least 83 police personnel and several farmers were injured in the violent clashes that erupted at different parts of the national capital on Tuesday.

One farmer also lost his life after the tractor he was riding overturned after hitting a barricade near the ITO intersection in the central Delhi.