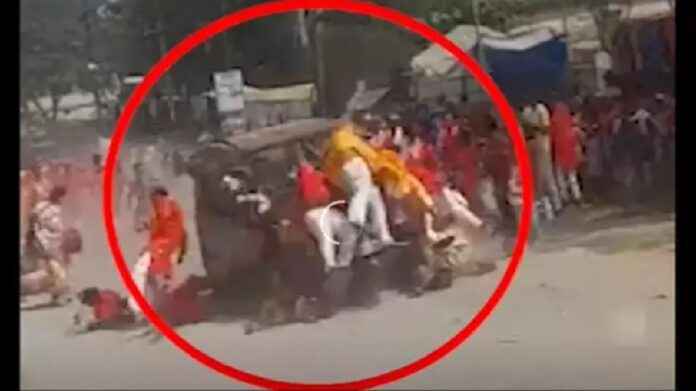 In a heart-numbing incident today, a speeding SUV plowed through a Dussehra procession in Chhattisgarh’s Jashpur, reportedly killing 4 and critically injuring 15. One deceased has been identified as Gaurav Agarwal, 21.

The crime which was captured on video shows a peaceful procession of saffron-clad Hindus being ruthlessly crushed by the SUV, leaving several dead. The vehicle was reportedly carrying a large quantity of ganja (marijuana).

The driver of the SUV was caught by locals and thrashed. The two occupants of the SUV – Radheshyam Vishwakarma, 21, and Shishupal Shahu, both from Madhya Pradesh – have been arrested.

It remains to be seen how many media personnel and politicians will make a beeline to Jashpur, like they did for Lakhimpur Kheri. Will SC take suo motu cognizance of this dastardly cold-blooded murder, where, unlike the Lakhimpur incident, the vehicle was not attacked in any way causing the driver to lose control and crash into the crowd?

But since this incident occurred in a state currently ruled by the ‘secular’ Congress, and as there is no political mileage to be derived from it, we can expect all political parties and other pillars of the Indian State to treat this as a routine law & order problem and push it onto the back-burner.

Also, its not like Muslim or Christian processioners were crushed to death – the majority Hindus need to be ‘patient’ and not expect any favors from the secular state; law will take its own course, as they say. Just like law is taking its own leisurely course with regards to prosecuting the murderers of Kamlesh Tiwari.

We will update the story as we get more details.

An initial version of this story mentioned that over a dozen people had been killed. But as per latest reports, 4 people were killed and 15 are critically injured, with number of casualties expected to rise. The article has been updated accordingly. Details about the accused and one of the victims have also been added.