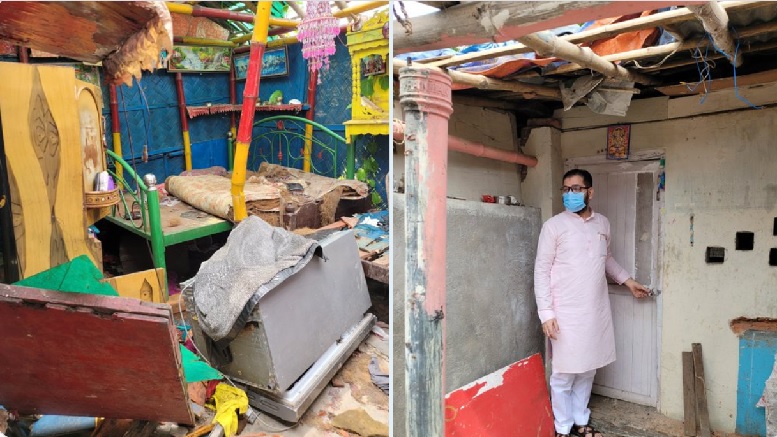 The fact-finding team of the National Human Rights Commission (NHRC) constituted by the Calcutta High Court to probe the allegations of post-poll violence in Bengal was attacked by some people when it went to the Jadavpur area of Kolkata to look into the complaints.

“We had received some complaints from the people that their houses were destroyed and so we went to Jadavpur to find out the details. Though we were accompanied by central forces, some people attacked us. If this happens with us, it is easily understandable what is happening to the common people,” said Atif Rasheed, one of the members of the NHRC fact-finding team.

A video posted by Rasheed on Twitter showed an angry mob of men and women threatening him. Rasheed, as seen in the video, kept telling the mob that they could not behave in that manner and had to take a step back. The CISF personnel could be seen trying to control the irate mob.

Mr Atif Rasheed, who went to Jadavpur as a member of the Fact-Finding Committee constituted by the HC (As a Vice Chairman of Minority Commission) finds BJP houses burnt and vandalised. He has been threatened by TMC goons.#politicalviolence

In another video, Rasheed can be seen walking away from the mob. Talking to the camera, Rasheed says that he and his team have been attacked by a mob of Trinamool Congress supporters.

Rasheed also revealed that he found about 40 houses that belonged to BJP workers which had been burnt to the ground. He further said that for the past two months, nobody knows the whereabouts of the BJP activists.

Meanwhile, long lines of victims of the WB post-poll pogrom were seen queuing up yesterday to meet the NHRC team, which had to extend its visit.

These long lines of citizen who say they are victims of #BengalViolence , out there since morning to talk to visiting NHRC teams, made the rights body extend its visit. WBSLSA, in its report to the Calcutta HC, said 3,243 reported suffering till 12 noon of June 10, 2021. pic.twitter.com/ubYyQuIATO

In another development, a fact-finding team headed by former Chief Justice of Sikkim High Court has submitted  its report to Union Minister of State for Home, G. Kishan Reddy. The five-member team, which includes two retired 2 IAS and 1 IPS officers, that was formed to look into the post-poll violence in West Bengal said in its report that 25 people were killed after the elections. There have been 15,000 incidents of violence and 7,000 women have been sexually assaulted, it said.

The people were made to leave their homes and some even had to take shelter in Assam, Jharkhand and Odisha, the report said. Some people’s houses were completely burnt and destroyed, even as they were not allowed to work. The connecting bridge to a village that voted for a particular party was demolished, the report said, adding that water connections were also been snapped.

The committee said that people of a particular party were targeted and attacked, adding that the police acted very negligently. Instead of giving justice to those people, the police registered a case against them. Apart from this, despite complaints, the police did not arrest anyone, it added.

Quoting the report, one of the team members said that the violence was not sporadic or done in a fit of temper but it was premeditated, well-planned and widespread. The local mafias and criminals were used to trigger violence and that was done by one political party against the supporters of another political party, he said.

The political violence took place in 16 districts. Due to the damage done during the violence, people have even gone to other states in fear, the report said. The fact-finding team suggested that the report should be placed before the Supreme Court and the SC may consider constituting a special investigation team (SIT) for fair investigation and early justice.

KMP Expressway, which passes through Nuh/Mewat, earns reputation as ‘unsafe for women’