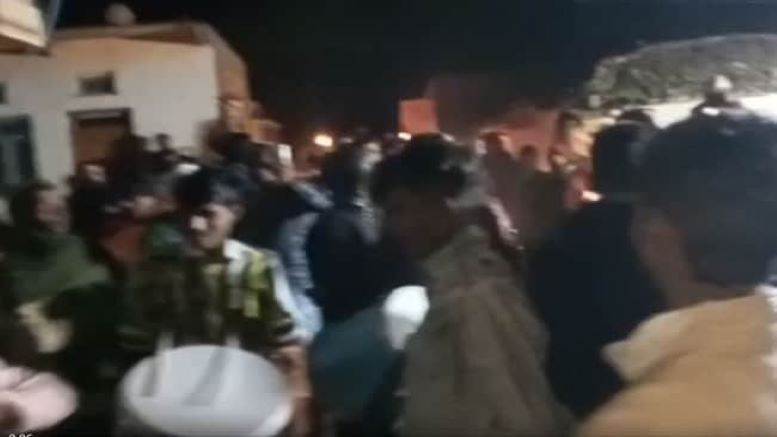 Propaganda outlet NDTV is known for spreading fake news and has time and again been pulled up for the same. 8 innocent people belonging to the Rajput community have been booked under the SC-ST Atrocity Act and sent to jail in a fake case filed after provocation by Bhim Army members.

Not only did the channel give it a fake caste atrocity spin but also intentionally did not report Bhim Army’s provocation in the matter. Hindi news portal Falana Dikhana conducted a ground investigation in the matter and reported the entire sequence of events.

As per ground reports, the incident pertains to Sunday (7 February) when the marriage procession of Radheshyam Meghwal’s son Deepak Meghwal was passing through the road where Devnarayan Mandir is located. The DJ system which was playing in full blast by the marriage party was disrupting the religious event (katha and sundarkand path) that was going on in the temple.

Following the disturbances, villagers present at the event requested the marriage party to lower the volume. However, some members of the Bhim Army who were present among the marriage party members began spewing abuses and the drunk Bhim Army members even brandished their swords. This led to an altercation between the two parties which was amicably sorted by the police who had arrived at the scene after being informed regarding the same.

After mediation by police the marriage party was allowed to carry out their procession. However, the Dalits filed fake cases against 8 members of the Rajput community alleging that they were not allowed to proceed and even the groom wasn’t allowed to get on his horse.

The villagers have made it absolutely clear that the dispute arose only because of the involvement of Bhim Army while adding that there have never been any such incidents in the village before. Villagers said that Dalit families have been amicably conducting marriages of their daughters and sons. However, Bhim Army members participated in the marriage function for the very first time and have spoiled the atmosphere in the village.

They alleged that Bhim Army members who were drunk purposely increased the volume of the music system and created a ruckus. They added that it was Bhim Army which caused a rift between two communities in the village which was peaceful. Villagers also said that despite having knowledge of the Devnarayan katha and sundakand path,

Bhim Army members intentionally played loud music after compelling the marriage party to halt outside the temple. They even forcibly played “jai bheem jai mim” songs. Villagers also highlighted that devotees present in the temple had merely asked them to turn down the volume. But the drunk Bhim Army members picked a fight with the devotees and assaulted the latter.

That this was a deliberate ploy by Bhim Army members to disrupt peace in the village is attested by the fact that only 8 days ago another Dalit youth named Dwarkilal had got married. His marriage procession went off peacefully without any issues as the youth from Bhim Army were not involved in that function. Villagers have said in no uncertain terms that Bhim Army members participated in the procession on Sunday and turned it into a dispute between two communities.

They further pointed out that the marriage procession of Deepak Meghwal’s sister who got married in March last year also went off without any issues and in fact members of Rajput community had also participated in the function. However, Deepak and his family members filed a case against 8 villagers of Rajput community after being incited by Bhim Army members to do so.

NDTV, on the other hand, conveniently used the incident for its Hindudveshi propaganda. It gave a caste atrocity spin to the dispute without proper investigations. Additionally, the channel not only propagated the case as one of Dalit atrocity but also didn’t report the involvement of Bhim Army and provocation by the latter. NDTV spread misinformation through its one-sided reporting.