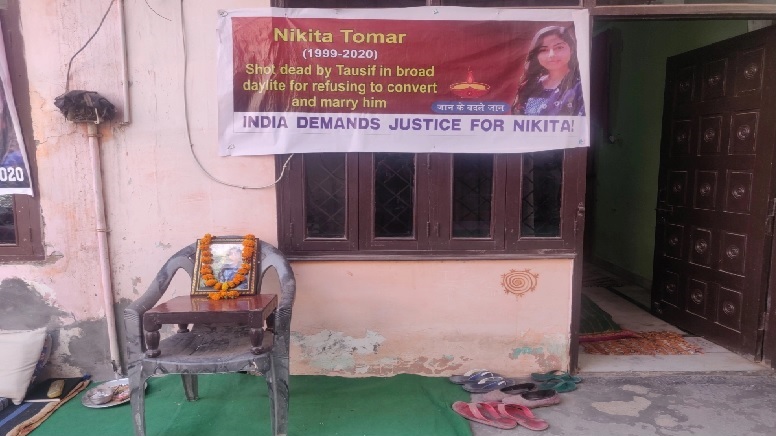 A fast track court in Faridabad has convicted key accused Tauseef Ahmed and his friend Mohammed Rehan in the shocking Nikita Tomar murder case. The young college student was shot dead on 26 October, 2020 by Tauseef for refusing to convert to Islam and marry him.

The two accused were convicted for conspiracy, kidnapping and homicide. The quantum of the sentence will be pronounced on March 26 (Friday). A third accused Mohammed Azruddin, who had allegedly supplied weapons to the other two has, however, been acquitted.

The murder was captured on CCTV camera.

CCTV footage shows a girl named Nikita Tomar being shot dead by an assailant (Taufeeq) outside her college in Ballabgarh, Faridabad. Shooter and associate flees in car. Police have arrested Taufeeq. pic.twitter.com/idOPIDZfDo

Nikita, a 20-year-old B.Com final year student, had just stepped out of Aggarwal college in Faridabad, Haryana with her woman friend after giving an exam, when a car with two occupants inside stopped by her side. Tauseef tried to pull her in and opened fire when she resisted and raised alarm. The girl was shot in her chest and fell down while bleeding heavily. Tauseef and his associate Rehan then got into their car and drove away.

Nikita and her murderer had studied together in school. Tauseef had kidnapped her in 2018 too, but the case was later dropped by Nikita’s family due to police apathy and pressure from Tauseef’s politically-connected family of Congress heavyweights: his cousin brother was a Congress MLA from Nuh (Mewat), late uncle was a Congress MP and ex-Harayana cabinet minister, and his grandfather was also a Congress MLA.

Even an open and shut case where the murder was caught on camera, has been attempted to be diverted by Tauseef’s family – their lawyer Mehak Saini filed a plea Punjab and Haryana High Court demanding reinvestigation in the case, claiming that the FIR was registered against him on behest of Nikita’s family to ‘cover up’ their own act of ‘honour killing’.

Meanwhile, Nikita’s father, Moolchand Tomar, has lost his private job as an electrician due to the repeated work absences he was forced to take to pursue her case. Back in January itself, he had exhausted whatever little resources he had, and expressed his pain and fears to Swarajya:

“I am also told that even if he gets convicted by the district court, he can go to the high court. How am I going to continue the fight? I have already exhausted all my resources….We need a lawyer at every step. Every trip to the court needs money. I don’t want to take any names but even policemen ask for money for doing their job…..“I am told that everything hangs on the testimony of witnesses and they can be bought with money. The other party [Tausif’s side] is powerful and has hired some of the most expensive lawyers,” he said.

What is even more shocking is that no government help has been forthcoming, despite many promises made by politicians of all hues at the time of Nikita’s murder. Only a few private individuals and Hindu social organisations have chipped in to support the family. Locals contrasted this apathy with the prompt release of compensation money in Junaid Khan’s death over a seat-related dispute on a train.

Moolchand Tomar’s fears are well founded- the fast-track court’s conviction is just the first step. Unless Hindu society keeps the pressure on judiciary and government, there is every chance that Tauseef Ahmed could walk free. He deserves nothing less than the death penalty, and our Hindupbhoic left-liberal lawyers and elites will do everything in their power to save him for the gallows. We must support the Tomar family in whatever way we can.