Multai massacre: when 24 innocent farmers were massacred in 1998 by Congress CM Digvijay Singh 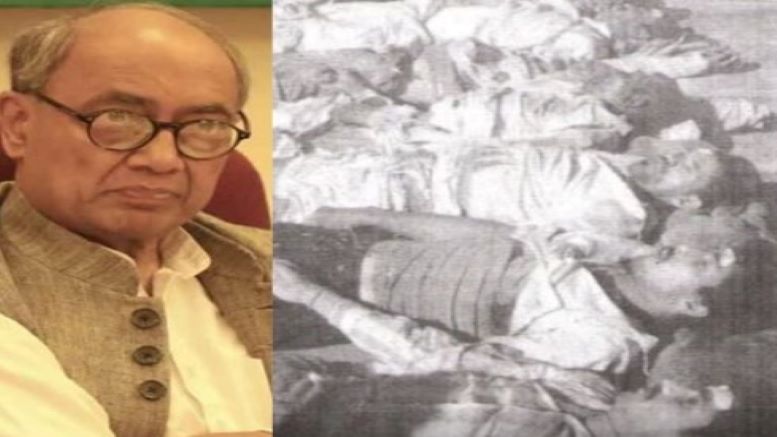 While Congress has been waxing eloquent about farmer’s rights, the entire party including its leader Digvijay Singh seems to be suffering from collective amnesia. Singh should be the last person to lecture on farmers’ rights given the fact that it was his government that slew protesting farmers in Multai in 1998 in cold-blood by firing as many as 150 rounds of bullets on them.

In 1997 farmers were faced with a dire situation as adverse weather conditions had caused crop damages pushing them towards starvation besides leading to heavy losses. Losses coupled with the inability to repay loans led the farmers to make demands of the then Congress government under Digvijay Singh. However, Singh instead of lending an ear to farmers’ woes brutally suppressed the movement leading to the death of 24 farmers and handicapping several others.

The farmers began agitating on 25 December 1997 outside the Multai Tehsil office demanding loan waivers, compensation for crop damage, waiving off electricity bills, and payment of crop insurance among others. The agitation went on for thirteen days after which the police allegedly uprooted the tents in a late-night operation.

One of the eyewitnesses said that they were caught unawares as police barged into their tents at night, ransacked the tents, attacked the farmers, and even took away the money they had kept for buying ration supplies the next day. This was, however, only the beginning of the atrocities, and the farmers barely knew what was to follow.

Anirudh, one of the farmers believed to be close to farmer leader and ex-MLA Sunilam, was on his way to the protest site on the morning of 11 January 1998 when he and four others were picked up by the police and taken to the station in a bid to coerce them to reveal the whereabouts of Sunilam. Anirudh alleged that the police severely tortured them after which they were locked up in jail.

In the meanwhile, additional collector Shri Awasthi reached the police station to meet Anirudh. He told him that he had come there to get them released. However, after having gotten into an argument with the Superintendent of Police (SP), the collector could not secure the release of Anirudh and the other four who had been arrested. He, instead, warned Anirudh and said that he was helpless. He also said that the SP would be opening fire and killing people the next day.

The Kisan Sangharsh Samiti had called for gheraoing (surrounding) Multai Tehsil Office to push for their demands. On 12 January 1998, the protests that began peacefully soon turned violent with agitating farmers resorting to stone-pelting. The police then opened fire leading to the death of 24 farmers (official figures say 19 deaths) and injuring 150 others.

Several eyewitness accounts in the above video state that the police opened fire all of a sudden without any warning. The farmers said that they were protesting outside the tehsil office when the police began indiscriminate firing from both the police station as well as the adjoining hospital building. The farmers were caught with no escape route and the massacre went on for more than two hours. The area was then placed under curfew.

Many farmers also alleged that fines amounting to INR10000 were imposed on them and they are still awaiting justice from the courts. They added that no cases were filed against police officials who were involved in the shooting and subsequent massacre.

Several families lost their breadwinners or young children. One farmer narrated how he lost both his sons to the massacre as his second son had gone to pick up his fallen brother and was shot dead by the police. The tragedy rendered many families childless and many others handicapped and shattered.

While court cases have been dragging along, a judicial commission gave a clean chit to the officials while putting the entire blame on then MLA Sunil Mishra who is popularly known as Sunilam. The commission’s report held that it was Sunilam’s provocative slogans that led the protesting farmers to turn violent and not just destroy property but also kill a fireman. Although 66 supposedly fake cases were filed against Sunilam was convicted and sentenced in only three cases. He was either acquitted in the other cases or the cases were dropped.

The Congress which is today shedding crocodile tears for farmers, couldn’t even ensure that the suffering farmers were given some relief back then preventing the loss of innocent lives. What’s more? Unlike the present-day Khalistani led farmer agitations, these were genuine farmers pushed to the brink due to the vagaries of weather.

Congress, Rahul Gandhi, and Digvijay Singh, in particular, would do well to recall the Multai massacre before lecturing on farmers’ rights.