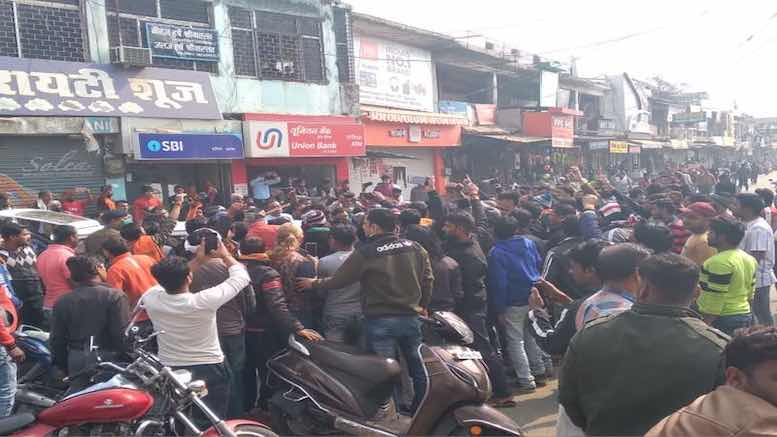 A Hindu teacher, Ajay Muda (30), was killed and his nephew, Sujeev Muda, seriously injured when the two were stabbed by a mob led by the local butcher community, on Monday night in Damoh, Madhya Pradesh.

The incident occurred in Rajnagar area, Dehat police station area of Damoh town. As per Nai Dunia, a group of men were stealing cattle when they were challenged by Ajay and his nephew. The smugglers called some of their associates via phone, and proceeded to attack the two with sharp weapons.

However as per some other reports and local police, the altercation started when Riyaz Qureshi and Vijay Ahirwar who were coming from the market started urinating outside Ajay Muda’s home. When Ajay protested, the men argued and they came to blows. The two then ran off to Kasai Mandi (butcher market) and came back with more accomplices and proceeded to stab Ajay and Sujeev.

Police has lodged a case against 8 accused – Riyaz, Shamim, Qayyum, Matru, Babba, Vijay and 2 others – 7 of whom have been arrested. There are also reports that Ajay was involved in Gau Raksha  (cow protection) activities. He is reported to be from a SC (Scheduled Caste) community.

Both Ajay and Sujeev were rushed in critical condition to the Damoh district hospital from where they were referred to Jabalpur. However, Ajay passed away during treatment, while Sujeev is still battling for life.

On hearing the news, enraged locals accused that members of the minority community were behind the attack and demanded quick action by police. They carried out a mass protest on Tuesday and refused to allow cremation of Ajay Muda until assurances were given by senior police and administration officials.

This attack comes on the backs of multiple incidents of stone pelting by Muslims on rallies to raise donations for the Ram Mandir in Ayodhya. These incidents have been reported from Begumbagh area of Ujjain and Goutampura area of Indore. In Begumbagh, even women and children were seen pelting stones, and the administration later demolished an illegal house from where pelting occurred besides arresting four accused –  Ayaz Mohammad, Wasim Aslam, Shadab Akram and Altu Aslam – under the NSA.