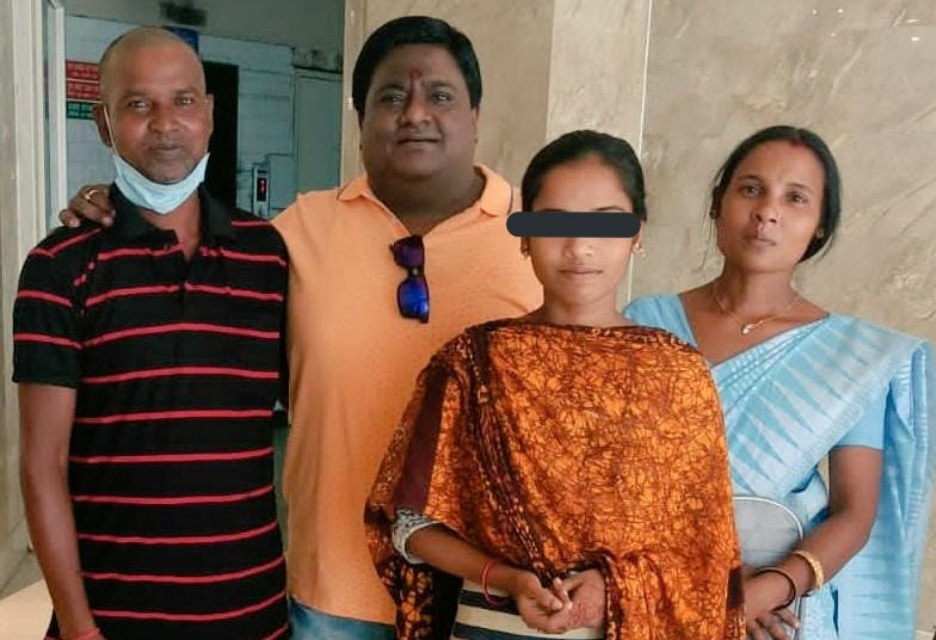 A minor girl from a Hindu Vanvasi community in West Bengal was rescued with the help of BJP leader and President of social organization Singha Bahini, Devdutta Maji, earlier last week. The girl who had gone missing was rescued from Haryana and reunited with her parents who have expressed their immense gratitude to Maji and demanded exemplary punishment for the Muslim youth and his father for plotting the grooming and abduction of their minor daughter.

The incident has been reported from Gangarampur village of West Bengal’s Dakshin Dinajpur. The father of the minor informed media that his 16-year-old daughter had gone missing on August 16th. They searched her extensively in the vicinity but couldn’t find her and then registered a complaint at the local police station. The distressed parents however got some support only after approaching Devdutta Maji with the case details.

A call from a poor, tribal & hapless mother, her minor daughter taken away by a Jihadi Youth on 16Aug.
Immediately we started working on it.
Very next day I informed the parents that their daughter has been tracked by Haryana Cops & the accused is in Custody.
Next Tweet
1/2 pic.twitter.com/P2H3OHeLgZ

Reports suggest that the minor was a student of class nine and had been lured into a relationship by a local Muslim boy, Limon Sarkar for over a year. The victim’s father alleges that the Muslim youth had coaxed his daughter into eloping with him with the support of his father Amajuddin Sarkar. He also accused the local police station of inaction towards finding their daughter and it was only after contacting Devdutta Maji that they got some assurance. The next day, Maji informed the parents that their daughter had been located in Haryana.

The father, who was residing in a rural area about 12 hours away from Kolkata, informed Maji that he was a poor man and had no resources to travel to Haryana. So Maji asked him to reach Kolkata and assured him of all the support needed to recover his daughter. After arriving at Kolkata, Maji made all logistic arrangements for the couple and they travelled to Haryana the next day. The minor was safely rescued in Haryana with the help of the police and the guardians were given her custody. The accused Muslim youth has been nabbed by Haryana police and is under arrest.

The family is extremely poor, no money to rush to Delhi/Gurgaon to see their daughter.
With the Blessings of Maa Kali & all of Ur Support, we provided all support to the parents to reach Delhi & get their daughter back.
Thanks to Haryana & Bengal Police.
Also big thanks @NCPCR_ pic.twitter.com/EkNgGEWZlX

“What Devdutta dada has done for us is beyond words of gratitude,” said the father while speaking to the press. He further appealed that this case should be reported by the media and be known to people so that people are made aware of such evil plans and practices employed by such people. “We have never seen God, but dada has become a god-figure to us now. The way you have helped us in reuniting with our daughter, we plead to you to make sure no other girl in Bharatvarsha has to go through such torment.”

“The Muslim youth who did this must be punished severely and media should also create awareness among people towards such incidents,” asserts the minor’s mother. She echoes her husband’s sentiments and respect for Devdutta Maji and hopes that no other girl should ever face the difficulties and dangers her daughter was put through.

Maji’s prompt action to rescue the minor, belonging to Bengal’s Vanvasi (tribal) community, from the trap of grooming jihad was applauded by netizens.

You are great. We are very proud of you Devdutt ji.

Devdutta Maji has thanked police for their efforts and expressed gratitude for the blessings of Maa Kali and the support of his followers. Maji was BJP’s contestant from Chowrangee in the 2021 assembly elections. Unfortunately, he lost the seat. While his supporters were proud of his selfless act of humanity, some also lamented why such a public-spirited person was not chosen by the Hindu electorate.

Such a gem has been defeated by Amta h!ndus Very Dissapointing