Incidents of child abuse from Malappuram have been pouring in since the last few days with the latest one being that of a minor rape survivor who was allegedly sexually abused by 38 persons after she was released from the rescue centre. News reports state that 33 of the 38 accused have already been taken into custody by the police. However, it is both shocking and worrying that instances of child abuse are so rampant in a supposedly highly literate state.

The girl who told about her ordeal while receiving counseling at a Nirbhaya centre said that she was raped when she was only 13 years old in 2016. The police sent the girl to a shelter after registering a case under the POSCO (Protection of Children from Sexual Offences) Act. The girl was sent home in 2017 but she lodged a police complaint soon after accusing a neighbor of sexually abusing her. The police then shifted her to the Nirbhaya centre.

As per police officials, the girl was allowed to return home during the lockdown in 2020 to reside with her brother and mother. However, she went missing and was later traced to Palakkad in last December. This is not the only instance of child abuse that has been reported from Malappuram.

Earlier media reported the case of a 47-year-old man from Malappuram sexually abusing his own four minor daughters. As per available information, the man was taken into custody from Valanchery and charged with abusing his four daughters aged 17, 15, 13 and 10 who are studying in classes XI, IX, VII and V respectively.

The abuse came to light when the younger daughter informed school authorities during a counseling session that her father told her to return home only if she was ready to be touched by him. Following this shocking revelation the school authorities held counseling sessions for the girl’s other three sisters studying in the same school. It was then that it came to light that the girls were being subjected to sexual abuse by their own father for the past several years.

The man was arrested after police filed four cases of sexual abuse against him when the Child Protection Unit members, who were informed by the school authorities brought this to the former’s notice. Court remanded the man to judicial custody. It has also been learned that he is originally from Thiruvananthapuram and has been residing in Valanchery for the past several years now.

These aren’t stray incidents and there is a pattern of such child abuse cases especially those involving close family members of the victim from Malappuram district. Available information indicates that many instances of child abuse have been reported by victims from Malappuram and the cases from the district are on the rise.

In 2019 the case of a 12-year-old girl who had been raped by around 30 people over two years had come to light during a counselling session in the girl’s school. The standard VII student had confided in the school counsellor and told the latter how her father’s friend had raped her first and paid the family money in return.

Following this, her father, who is unemployed and had also forced his wife into prostitution, forced the girl into physical relationships in return for money which was collected by a third person. The father also forced the child to take her nude photos and send it to the men.

It was only after one of the neighbors complained to the school authorities regarding suspicious activities in the girl’s house following which the school authorities sent the child for counselling leading to the revelation of the girl’s traumatic experience and severe sexual abuse. The girl had quietly borne the abuse due to the family’s poor financial status fearing that her father being jailed would push the family into deeper crisis.

Official police data indicates that Malappuram district tops in the total number of POSCO cases with 376 child abuse cases having been registered between 1 January and 31 October 2019 alone. Similarly in 2018 410 POCSO cases were reported from Malappuram district. 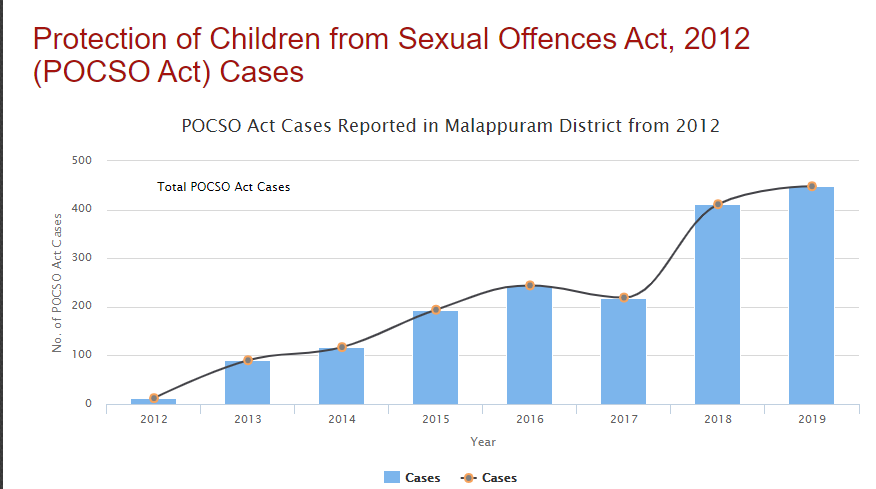 Statistical data from Kerala police’s official website shows an exponential rise in the number of cases registered under POSCO indicating the rising graph of child abuse in the district. Child rights activists have been demanding stringent action from the state government. The slow pace of judicial process is also a major cause of worry as child abuse victims struggle for justice. Special public prosecutor Aisha Jamal had recently informed that as many as 832 child abuse cases registered under POSCO Act are pending at Malappuram district’s Manjeri Sessions Court.