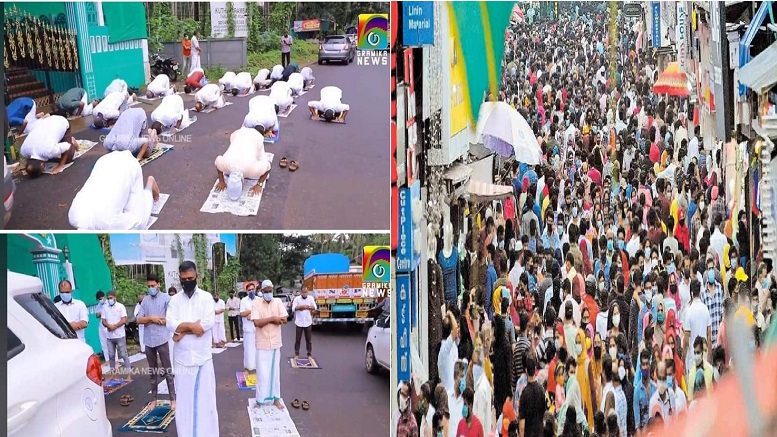 At a time when the state has the highest number of daily new CoVID cases in Bharat, the Kerala government allowed total lock-down relaxations for three days in view of the Muslim festival, Bakrid. On the evening of July 17, they announced the same with relaxations scheduled on July 18, 19, and 20. Muslim Keralites in their thousands swarmed the markets, shops, and towns to shop for the festival. CoVID protocols went for a toss and all that the police and administration could do was remain mute spectators.

According to the guidelines, unrestricted prayers/gatherings at mosques were allowed. This was while thousands of Hindu devotees were simultaneously denied entry to visit temples. This was in Kerala where Sabarimala Temple was off bounds and in UP, where Kanwar yatra was cancelled. Curiously, UP has only 60-70 daily CoVID cases while Kerala has about 15000 cases per day.

Though the inequality and misuse of ‘Federalism’ were clearly visible, the Supreme Court did almost nothing and on the third and final day just lightly rebuked the state government. In fact, they had to be petitioned to look into the matter by a concerned citizen. In case of Kanwar Yatra of UP, they had strictly banned it and actually taken suo moto cognisance of the same! The SC bench comprising Justices RF Nariman and BR Gavai actually delayed the matter by giving Kerala ‘time’ to file its reply. They then allowed the violations to continue by trivialising the matter saying that ‘the horse has bolted’ and allowed maintenance of the status quo! On the 16th, the same bench had rejected an Uttar Pradesh plea to hold a symbolic Yatra proclaiming that people’s health and right to life are above even religious sentiments!

The court did admit that they were shocked at the state of affairs in Kerala adding that the state could not guarantee the right to life and health to all its citizens. In any case, if we dare pin the blame on the court for the third wave, we would be stepping into dangerous territory. During last wave, Kumbh and UP Panchayat elections were mentioned as major reasons for the spread of pandemic. Interestingly, even then the elections had been held due to stubbornness of High Court, which was conveniently forgotten.

July 17 was also the day when the Sabarimala Temple opened for monthly poojas. This is a special month coinciding with Ramayana Month. Devotees who were banned till now were allowed access but with strict restrictions. A certificate of receiving two doses of vaccine or a CoVID negative certificate from the last 48 hours were compulsory.

Devotees had to get online booking through a virtual queue, issued by the state government. Many rituals including the holy Pamba bath before trekking up the hill were banned. Someone who underwent penance for 41 days (usual among devotees before visiting Bhagwan Ayyappa) was still not assured of darshan.

The communist regime had capped the entry to 5000 per day. One day before the start of the poojas, the state tried to appease Hindus and allowed an extra 5000 each day but by then the non-performance of penance made sure that none of those extra 5000 could go.

In court, the Kerala government said that relaxations were given to help traders and to alleviate their misery to a certain extent! They also added that the people have been frustrated by the curbs which have been in vogue for more than three months. Earlier, even as huge malls and shopping centers were open, these traders were not allowed permission to run their businesses. More recently no talks on this matte had happened between state government and traders’ bodies.

Even as timings were being extended for essentials the world over, small traders in Kerala were forced to open late and shut shop by 7 in the evening. This was leading to huge queues and unwanted hassle. Saturday and Sunday were total lockdowns all over the state until this weekend. That the communists felt their pain exactly a day before Bakrid is fishy.

Kerala is a state that has less than 3% of Bharat’s population but accounts for 33% of corona caseload. Alarmingly, the state allowed even shops in the D category (where infection rates are above 15%) areas a full day of relaxation. A category with TPR less than 5%, B with 5 % to 10%, and C with 10 % to 15%, have all opened their shops. This meant that people living in A were going to even D, areas usually under triple lockdown!

Millions of Muslims across Gulf nations including Bahrain, Kuwait, Iraq, Oman, Qatar, Saudi Arabia, and the UAE are celebrating Eid on Sunday inside their homes due to the coronavirus pandemic. As soon as this news started coming, local radical elements started assembling and praying on the main roads as a show of power. Why did Kerala allow something that even Pakistan has not allowed?

A parallel system of governance has taken over the state of Kerala, where jihadi elements are ruling the state with communist ministers bearing Hindu names propping them up. The media suggested that none other than Pinarayi Vijayan’s son-in-law and the newly appointed public works minister was behind this evil scheme. Nothing else explains such blatant communal appeasement.

The court had earlier said that if Eid celebrations lead to any “untoward spread of COVID-19 disease”, action will be taken against those responsible.  The test positivity rate that hovered around 10, jumped to 12 yesterday. Within 2 days of lockdown relaxations.

The court order blaming the state came by noon and the regime could not fudge today’s covid numbers. They have been hiding covid fatality numbers using an outdated WHO system instead of following the IMO. This was reported earlier this month but no action has been taken yet to remedy the situation.

Jihadi elements have made Hindus second-class citizens in our own country. The government is complicit and the courts have shown that they don’t care. Ideally, the nationalist government at the center should have stepped in but remained largely oblivious to the plight of Hindus. These are bad omens for practising Hindus of Kerala. Secularism and secularists has failed them. This round of treachery comes at a time when one suspects that the third wave is already upon us.