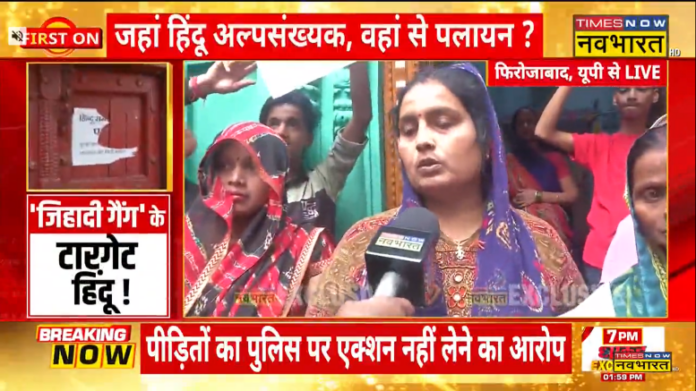 Hindu exodus forced by Islamists on the lines of Kairana is repeating itself in the Tila Mohalla area of UP’s (Uttar Pradesh) Firozabad. Times Now report notes Hindus in the area have put up posters of their exodus claiming they are being harassed by Muslims who want to build a Masjid in place of their temple among other things. They have narrated their ordeal naming Raju Chikna and Aman Khan as the main culprits.

“We are being harassed and forced to leave this place. Women aren’t safe as rowdies abuse us. Girls are sexually harassed, stones and bricks are hurled at our homes, we are scared as we have small kids”, said a couple of women residents of the area. “We have tried complaining many times but no one listens to us. Even the police don’t entertain us and listen to our concerns”, an old lady said in response to the reporter’s question as to whether they filed a complaint with the police.

The ladies also informed the media that they were dissuaded from performing puja by the Islamists. It has come to light that the issue began with the Islamists wanting to occupy a temple located behind the Hindu colony.

One of the Hindu residents said that the Muslims arrived in area 8-10 years ago. They added that Muslim residents have threatened to erect a masjid. They also block the path of the temple by parking their vehicles on the way. Furthermore, the temple priest has also been threatened for objecting to the haphazard parking blocking the path to the temple.

Raju Khan alias Raju Chikna, his wife Rubina Begum and his son Aman Khan who runs a betting business were blamed by the residents for their ordeal. One Manish is also accused of siding with the duo. The duo hurl abuse at the Hindu womenfolk. The situation is so scary that the Hindu women are scared of stepping out and sending their girls outside.

Asked if they brought the matter to their MLA’s attention, one of the women said “we complained to our MLA who helped us out. However, later the Muslims began parking their vehicles near the temple. Rubina Khan deliberated spoiled the lives of 5-6 of our boys by filing false complaints of sexual harassment against them. The future of those boys has been destroyed. Now they are again picking up fights with us to force us out of the area”.

They also informed the media that after spoiling the lives of 5-6 boys, the Muslims have now filed a false one-sided FIR against 28 Hindus. The administration has been indifferent to their plight and the residents usually remain awake all night out of fear for the safety of their children. Some of the residents also informed that the Islamists throw meat and bones inside Hindu homes in a bid to make them leave.

“This was a Hindu majority area and this ancient temple has been here for a long time. Raju purchased a home in this area some years back. After purchasing the house, he wants to close down the temple and convert it into a masjid. The Hindus are being deliberately harassed to force them to sell their houses and leave the area”, informed a male resident. He added that Raju Khan Chikna was being supported in his act by his 4-5 children and Muslims from the nearby areas. They alleged that Khan wants to create communal riots in the area.

Firozabad BJP MLA Manish Asija informed Times Now that the police administration has arrested Raju Chikna and the people of the area don’t have to feel insecure. He further said that they are monitoring the situation. The MLA refused to accept that there was an atmosphere of fear in the area and insisted that action has been taken against the guilty. He, however, had no answers when asked why the residents had put up a board about their fleeing the area.

The apathy of the secular state towards Hindus in a state like UP where Yogi Adityanath is in power speaks volumes about the plight of the so-called majority community. Since the Kairana exodus in 2016, the Hindu community in several places of the country have been forced to flee once the Islamist population increased thereby reducing Hindus to a minority.

Rajasthan’s Tonk (September 2021), Gujarat’s Bharuch (October 2021), MP’s Ratlam (January 2022) and Mahajani Tola (June 2022) are some of the areas from where Hindu exodus has been reported in recent times.