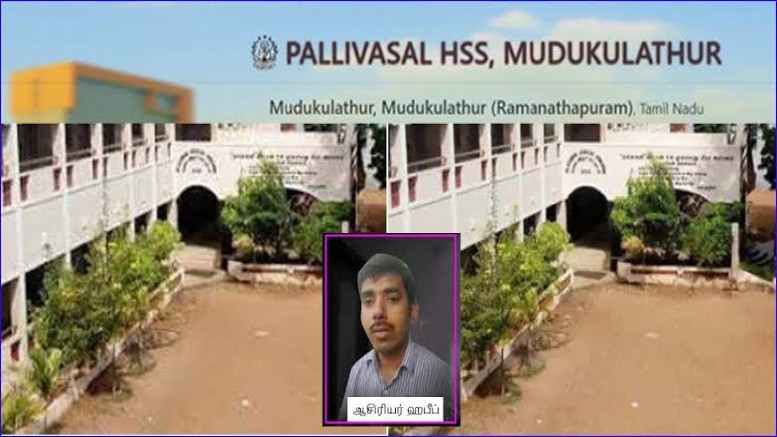 A Muslim teacher has been arrested for sexually harassing his girl students. Habeeb, a science teacher in Pallivasal(mosque) Higher Secondary (government aided) school, has been accused of harassing girl students through WhatsApp in the pretext of taking online classes. He was arrested after the audio of him speaking inappropriately went viral in social media.

Habeeb has been working in the Muslim school for the past nine years. As per news reports he has been harassing girl students through WhatsApp after obtaining their individual numbers in the pretext of conducting online classes. Parents of a 9th standard girl, one of his victims, filed a complaint against him. He is said to have sent lewd messages to the girl on June 18th and called her and talked inappropriately the next day.

In the recorded audio of the call which went viral in social media, he asks the girl to come over to his house when her parents are away. He tells that many girls have come to his house and submitted to his demands and that he helped them pass with flying colours. He threatened the girl that he’ll fail her if she doesn’t show up. He also spoke in an arousing manner using phrases like “sexual desires shouldn’t be pent up”, “sexual needs should be satiated immediately”, “I will teach you the lessons I couldn’t teach in the classroom” and asked them to make video calls when their parents were away.

After this girl’s ordeal came out many other girls have complained of undergoing sexual harassment at the hands of Habeeb. Many girls, fearing what will happen to them if they reveal the truth, wanted to change the school to escape his harassment. There are allegations that there were many such complaints in the past but the school brushed them under the carpet. Supposedly government officials are also friendly with the school management and do not take any action on such complaints.

Polimer News reported that Habeeb had sexually abused a girl 2 years ago in the school premises itself. When the girl’s parents raised the issue with the school management, they restrained the parents from going to the police saying it will affect the future of the girl. As an eyewash they took disciplinary action on Habeeb by suspending him for a few days and took him back again. So far 15 girls have come forward to lodge complaints on Habeeb. However it’s suspected that more than 25 girls in the current batch have been victims of his abuse. He has been booked under POCSO and Juvenile Justice Act.

Neither the name of the school nor of the teacher were revealed in the initial media reports. Even after reporting them there hasn’t been any war cry to take over the school in contrast with how Padma Seshadri Bala Bhavan, Sushil Hari, Maharishi Vidya Mandir and Chettinad Vidyashram were maligned for the crime done by a few individuals. The irony is that the witch hunt on some of the above mentioned schools continues in parallel with complaints on Christian and Muslim school teachers piling up but conspicuously absent from the limelight of media.