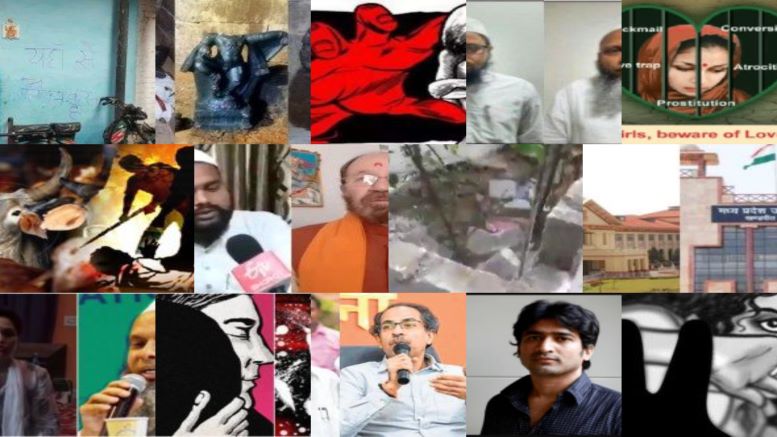 In this weekly summary for the period from 20 June 2021 to 26 June 2021, we hope to provide a snapshot of such crimes and hopefully awaken more people around the world to this human rights crisis:

1) 10 persons who are said to a part of an inter-state cow smuggling racket were taken into custody on charges of having murdered Gaurakshak Hardik, who is a member of VHP (Vishwa Hindu Parishad) and nephew of Valsad BJP District President Hemant Kansara, in Valsad on Friday by running him over with a tempo.

2) Just because a house was in the view of a CSI church, the church people demolished the compound wall of the house in Tenkasi, Tamil Nadu. The house and an autorickshaw have been vandalized in the process. The owner of the house had registered a complaint with the police and 8 persons responsible for the act have been arrested so far.

3) Criteria for granting bail appear to be dependent on who the accused is rather than what the offense is. Two recent bails granted by the Madhya Pradesh and Patna High Courts seem to suggest that one can get away with a lighter penalty even after abusing Hindu deities provided the person belongs to the minority community while those of the majority community would have to pay hefty fines for birthday wishes that may be construed to be ‘indecent’.

4) Murtis of a Chola-era temple have been vandalized in Pudukkottai, Tamil Nadu. A devotee who went to the temple was shocked to find all the murtis in the temple in a beheaded state. He lodged a complaint with the local police later. The Kailasanathar temple in KizhNanchur, a village in Pudukkottai is said to belong to the era of Kulothunga Chola III. With Shiva as the presiding deity, the temple houses other deities such as Ganesha, Parvathi, Murugan, Krishna, and Nandi. All of these murtis were discovered in a beheaded state 2 days ago.

5) UP Police has arrested two persons of a conversion racket, who were targeting Hindus for conversion to Islam. These have been accused of converting more than 1000 people in the past few years through various illegal means and allurements.

6) A bizarre and shameful incident involving a panchayat member from the Trinamool Congress has surfaced in Dhupguri of North Bengal’s Jalpaiguri district. Pratima Sarkar, a member of Gadang I gram panchayat, and her husband Partha Sarkar, also a TMC worker, have been accused of forcing their teenaged house help to drink alcohol and remove her clothes. They then proceeded to record her semi-nude video and circulated it.

7) One Abu Bakr Qureshi used an as yet unconfirmed chloroform-like chemical on a 15-year-old Scheduled Caste Hindu girl, carried the unconscious minor girl to a nearby hotel, and raped her. The incident happened at a village called Sikheda in Ghaziabad, UP. Following a complaint, the child rapist was arrested.

8) Four years ago in Pratapgarh, Uttar Pradesh, a married Muslim man named Azhar zoomed in on a Hindu girl for grooming Jihad and started operating under the alias Ankit Mishra. Using a fake Facebook identity under the newly acquired Hindu name, he developed a relationship with her and soon started sexually exploiting her on the promise of marriage. All the while unknown to the lady Azhar started recording their intimate moments.

9) A 19-year-old Dalit Hindu boy and his 18-year-old Muslim girlfriend are alleged to have been murdered by the girl’s family in what appears to be a case of honor killing. The boy identified as Basavaraj Madivalapaa Badiger belongs to Saladahalli while the girl Davalbi Bandagisab Tambad is a resident of the neighboring Khanapur.

10) Hindu hating Naxal sympathizer Ashutosh Bharadwaj, in whose opinion Ram Mandir is ‘communal’ and the Gujarat model is equivalent to a ‘surveillance system’, has now been appointed as the editor of a magazine funded by the Education ministry. Despite the rise of a so-called right-wing since 2014, academia continues to be controlled by leftists and the appointment of Bharadwaj only reinforces that.

11) A viral video has recently come to light where a mullah has declared that he shall pay Rs. 1 crore to anyone who can behead Hindu sadhu Swami Darshan Bharti and bring his head to him. The mullah, named Hafiz Faizan Raza is from Bareilly in UP and was brazen enough to repeat this offer to Muslims at large on TV.

12) Recently, 10 Hindu families living in a small colony near Colonelganj in Kanpur had handwritten messages scribbled on their front walls. They said that they are being forced to migrate from the locality after they resisted the conversion attempts of local Islamist goons who had delivered an ultimatum to ‘convert or leave’. The victims are being threatened that they will be ‘dealt with’ once the SP forms a government. UP elections take place next year.

14) A teacher from an English medium school in Fatehpur has revealed an Islamic conversion racket being run in the school where Hindu students and staff are being lured to embrace Islam. The teacher from Nurul Huda school said that she was expelled and her pay was withheld when she raised objections regarding the same.

15) A girl from Balipur village in Ballia district, Uttar Pradesh has approached the police with a complaint against a Muslim youth for posing as a Hindu to befriend her. The victim has accused him of rape and blackmailing. Based on a complaint, the police have registered a case against the accused, identified as Azhar Guddu of Katra village in Uttar Pradesh’s Pratapgarh district.

16) The minority Hindus in the Karnalganj area of UP are reportedly in a bid to sell their houses and flee the area. A few days ago, tensions erupted in the area due to harassment of Hindu girls by religious fanatics. As a result, Hindus in the area are now preparing to migrate. Only 10 Hindu families are living here. They are being forced by religious fanatics to convert. Hence, Hindus have put up the signboards outside their houses indicating that the houses are for sale. After receiving information regarding the matter, the Police assured Hindus that they would be protected. Meanwhile, the Police also pasted notices outside the houses of religious fanatics, urging them to maintain law and order.

1) A Hindu temple at Halderpara, Charraipur P.S Sirajganj district was vandalized by Muslims.

2) A Hindu temple was vandalized by Muslims at Kushari, Perrganj P.S Tagorgaon district.

Ensure your territory is not used for anti-Bharat activities: Bharat to Australia