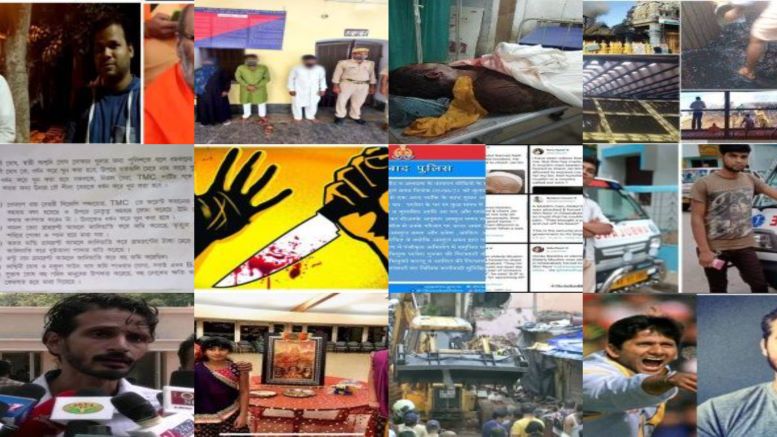 In this weekly summary for the period from 13 June 2021 to 19 June 2021, we hope to provide a snapshot of such crimes and hopefully awaken more people around the world to this human rights crisis:

1) Nationalist and pro-BJP YouTuber Kishore K Swamy was arrested by the DMK government in the middle of the night. Kishore who is a critic of DMK’s anti-Hindu and anti-development politics was arrested from his house at 2 AM last night.

2) A man identified as Mahfouz has been taken into custody along with four others for forcibly converting a widowed Hindu woman and her 2 sons. He is alleged to have trapped the woman by promising to provide shelter to her and the children after her husband’s demise. Mahfouz, however, forced her to convert before marrying her in a nikah ceremony and even forcibly circumcised the children as per Islamic customs.

3) Mithun Bagdi, BJP vice-president of Khayrashol Grameen Mandal in Birbhum district, was hacked to death on Saturday allegedly by TMC goons. Mithun was rushed to a nearby hospital where he was declared brought dead.

4) The involvement of a Hindu convert to Islam in the Swami Yati Narsinghanand murder conspiracy has come to light. He has been identified as Nagpur resident Vipul Vijayvargiya who converted to Islam having married a Muslim woman named Ayesha and had changed his name to Ramzan. He was allegedly provoked by Vijaynagar Sector 12 resident Salimuddin, believed to be Vipul’s trainer.

5) For the past few years, there has been an effort to defame Hindu Dharma by equating our sacred symbols with those of tyranny and oppression. It is well known that “Allah O Akbar” is probably the most feared phrase in today’s world. From New York to New Delhi, from Paris to Patna, and from Madrid to Mumbai, Islamists have used this phrase to murder innocent people with fearsome regularity. To hide their crimes, Islamists in Bharat have been trying to create the narrative that “Jai Shri Ram” is a “war cry”.

6) Former pacer Venkatesh Prasad has given it back in style to Hinduphobic American columnist Werleman as the latter attempted to malign Hindus yet again using the Test Championships as an excuse. Prasad also called out the bigotry of Bharatiya portals such as Shekhar Gupta’s The Print that has been eulogizing the likes of Werleman.

7) A first-year B.Sc student was stabbed 24 times by her boyfriend and his two friends after she resisted a rape attempt. Three youths, including the deceased’s friend, Mohammed Kaif, of the Sarojini Nagar area, have been arrested in this connection on Monday. The other two arrested are Vishal and Akash.

8) The collapse of a residential building in Mumbai’s suburb Malvani has once again brought to the fore the issue of illegal constructions triggered by demographic change in the area. The incident that took place on June 9 has brought several issues to the fore that are creating law and order problems in the area as well as posing a threat to the demographic and ecological balance. The continuous exodus of Hindus from Malvani with a simultaneous influx of illegal Bangladeshi and Rohingya population who are being illegally settled here by powerful politicians is affecting the demography of the area.

9) Two minor tribal girls belonging to the indigenous Rabha tribe were found hanging from a tree in a forested area near their native Abhayakuti village in Assam’s Kokrajhar district. The police have taken seven people into custody in connection with the rape and murder of the two minor girls. Of these, at least three are said to be Bengali Muslims.

10) The presiding deity of Mandaikadu Bhagavathi Amman temple has revealed that none of the customs and traditions are followed properly by HRCE. Last week the famous temple in Kanyakumari, Tamil Nadu, met with a fire accident. In Deva Prashnam the deity revealed that sampradaya was not followed diligently and devotees were made to suffer by the HRCE management.

11) The post-poll violence had ushered unspeakable crimes on the women who supported and worked for the BJP in Bengal. One such recent incident has been reported from Farakka, Murshidabad. On Friday 11 June 2021, a 15-year-old minor was picked up by two Ambulance drivers, named Mohammad Kareem Sheikh and Tarzan Sheikh from the NTPC area. After forcing the girl inside the vehicle, they took turns to rape her repeatedly in the moving vehicle, while driving the ambulance through the Farakka area all evening.

12) Posters issuing open threats of raping and then murdering BJP women workers have come up on the streets of Badkala, Kharagpur, West Bengal in broad daylight last week. Such threats are not new in the East Midnapore and West Midnapore districts, but no action has been taken to date by the administration to assure the safety of the state opposition BJP workers.

13)  The police in Uttar Pradesh’s Greater Noida on Wednesday arrested a 30-year-old woman’s live-in partner over allegations of rape and coercing her into changing her religion for marriage, officials said. “Accused Murtaza alias Mritunjay (33) is a native of Moradabad district in western UP and had been living in a rented accommodation in Bisrakh area. The accused and the complainant were in a live-in relationship,” a police spokesperson said.

14) Facebook blocks Pages of ‘Hindu Adhiveshan’, ‘Sanatan Prabhat’, ‘Sanatan Shop’, Hindi Page of Hindu Janajagruti Samiti, and ‘Forum For Hindu Awakening’ in the US. The anti-Hindu behavior of Facebook has been experienced by Sanatan Sanstha and Hindu Janajagruti Samiti in the same way as others. The Facebook Pages of many pro-Hindu organizations which are selflessly working in society to serve the Nation & Dharma may also have been banned.

15) Outrage swept the Bettiah sub-division area of ​​West Champaran, Bihar, after unidentified miscreants desecrated murtis in the much-revered Hindu temple in the region on Sunday. According to reports, anger erupted among people after they found the murtis housed inside the Ram Janaki temple located in Baswaria Dhuniyapatti vandalized and destroyed after it was opened in the morning. A written complaint was filed by the priest of the temple, based on which a case was registered in the city police station against unidentified anti-social elements. The police have launched an investigation into the case.

1) In Mirpur Mathelo a Hindu girl named Arooshi Kumari daughter of Guddu Kukreja, of Garebabad Mohala in Sindh, Pakistan was abducted by Babar Mirani and his men.

2) A minor Hindu girl was raped and killed in Sindh by Abdul, who already has 4 wives because the girl refused to convert to Islam.

2) Mohammad Kader Mia brutally attacked a Hindu family in order to grab their land and kick out the Hindu family. One man was injured in the attack on 12 June at Maheshkhali P.S. Coxbazar district

3) Two women were injured in an attack on a Hindu family by Mohammad Nur Islam and his men who wanted to grab the land of Hindus at Uzirpur P.S. Barishal district on 14 June.

4) Hindu boy Sajib Roy was arrested on 15 June on charges of blasphemy against Islam at Hatiya P.S Noakhali District.