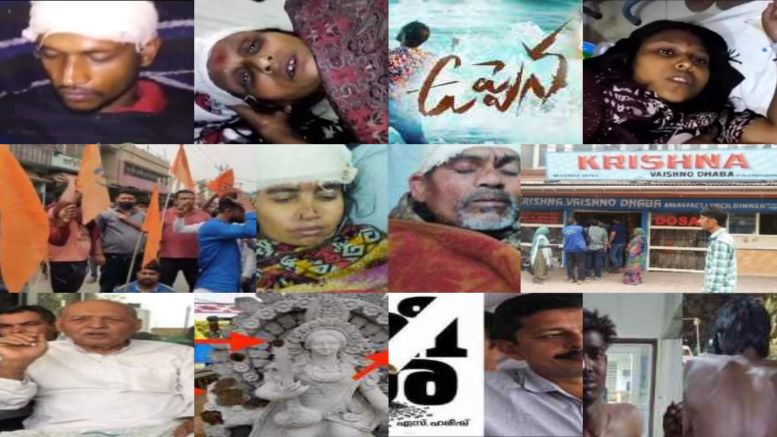 In this weekly summary for the period from 14 February to 20 February 2021, we hope to provide a snapshot of such crimes and hopefully awaken more people around the world to this human rights crisis:

1) A pastor has been accused of carrying out religious conversions of Hindus in Vanasthalipuram, Telangana. G.Chandra Mouli, a pastor at Jerusalem Church in Hasthinapuram at Vanasthalipuram, along with his wife went to the house of one Jayamma to ‘pray’.

2) The attacks on Hindus who dare stand with BJP are increasing as West Bengal elections come nearer. In a shocking incident on Friday, TMC goons poured boiling hot water on two BJP workers in Birbhum, the opposition party’s state unit shared via its official Twitter handle.

3) Farmer leader and Congress supporter Hawa Singh Sangwan went on a Hindudveshi/Hindumisic rant while speaking at the farmer protests. Sangwan even insinuated that Hindu dharma was not a religion while adding that people should convert out of Hindu dharma and adopt Sikhism.

4) The recently released Telugu-language film ‘Uppena’ (meaning high tide) has been called out for its anti-Hindu content by moviegoers. The romantic drama written and directed by debutant Bucchi Babu Sana and produced by Sukumar in collaboration with Naveen Yerneni and Y. Ravi Shankar, features debutants Panja Vaisshnav Tej and Krithi Shetty in the lead roles, with Vijay Sethupathi playing the antagonist.

5 )Meesha, a controversial novel that is openly abusive against Hindu customs has been awarded the state Literary Award by the Communist Government in Kerala. “Temple going women devotees are well-dressed in such way to lure the priests with the intention of having sex with them” – this is an example of the author’s words with reference to Hindu temples in the novel named ‘Meesha’ (the moustache).

6) A group of Muslim miscreants led by a local named Jalal vandalized a murti of Devi Saraswati on Wednesday. The incident took place in Domjur town in the Howrah district of West Bengal just before devotees were out for the immersion of the murti a day after Saraswati Puja.

7) Popular Hindu eatery Krishna Vaishno Dhaba’s owner shot in Srinagar by an Islamic terror organization. On 17th February, the terrorists from a banned Islamic extremist organization shot Akash Mehra, son of the Dhaba owner in the Durganag area of Srinagar. The terrorists purportedly belonging to ‘Muslim Janbaaz Force’ declared that the Dhaba owners are ‘non-locals and hence did not deserve to be in the valley.

8) A day after Islamic terrorists opened fire at an owner of Krishna Dhaba in Dalgate area of Srinagar, the area around another food joint named Shiv Shakti Sweet shop in Srinagar’s Barzulla has been targetted by terrorists.

9) Mahant Bajrang Muni was stabbed and grievously injured by Laik Khan and others in Sitapur.

10) Twitteratti protested against popstar Rihanna on Tuesday after she insulted Hindu dharma by shamelessly posting a semi-nude topless picture for her lingerie brand Savage X Fenty while sporting a necklace with a Bhagwan Ganesha pendant.

1) According to reports, Neena Kumari daughter of Ramesh Lal from Sindh’s Nashharo district’s Halani Darbar was abducted by policeman Ghulam Mahroof Qadri. He was deployed at a picket for the security of the area’s minority residents.

1) Every pujo, Jihadis vandalize murtis in Muslim-majority Bangladesh. This Saraswati Pujo was not an exception either. The murti of Devi Saraswati was vandalized by Islamists on the eve of Pujo at Nasirnagar police station area of Brahmanbaria district, Bangladesh.

2) Another incident of Land Jihad has been reported by a Hindu minority family in Muslim-majority Bangladesh. This time the location happens to be Kalibari village of Kalmegha union, Patharghata Upazila, Barguna district of Bangladesh.