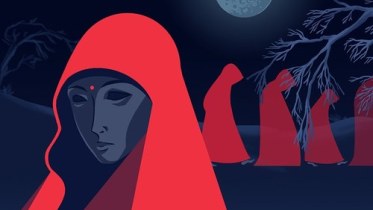 Members of Hindu organizations in Barkagaon, Hazaribagh district Jharkhand sat on a hunger strike on August 17 against increasing threats and attempts of conversion of minor Hindu girls. The victims of the threats- Suman Kumari and her little sister, were also part of the strike, along with their mother- Kiran Devi.

According to Kiran Devi, the village chief Wasim, his son, and a dozen others stormed into her house at around 8:30 pm on August 10. They constantly used abusive language in front of her minor daughter and forcibly took them away. Pressuring them to convert to Islam, the mob threatened to kill them if they refused. Both girls were forced to do sit-ups and had to endure obscene gestures by the men, and said video was made viral.

The following day the girls’ mother met Sadar Mohammad Halil, Secretary Professor Farzuddin, and Panchayat Samiti member Shabnam Parveen’s husband Mohammad Irfan, along with other people from the community to file a complaint in the matter. Wasim and his men somehow got this information and went to their house later in the night to beat up the sisters.

Sanatan Hindu Samaj Sangathan’s Aman Kumar claims that the police are not taking any action in the matter. Even after filing an official complaint at the Barkagaon police station and demanding security for the family, no steps have been taken yet by the police. August 15 was the last date given to the police to arrest the accused; when that did not happen, the Hindu organizations decided to sit on a hunger strike till the family did not get justice.

Station-in-charge Vinod Kumar says that the police have initiated a probe in the case, and two people have been arrested. “We are raiding the locations linked to the accused to find the rest of them. I appeal to everyone to have faith in the justice system. The culprits will be punished,” Kumar said.

It was also reported earlier that a case had been filed against Suman Kumari and her mother for “provoking” people on religious grounds. The police filed a case under Sections 295(A) and 298 of IPC, Section 67 of IT Act based on the complaint of the Muslim side. However, according to the local villagers, this is the police just giving protection to the accused.