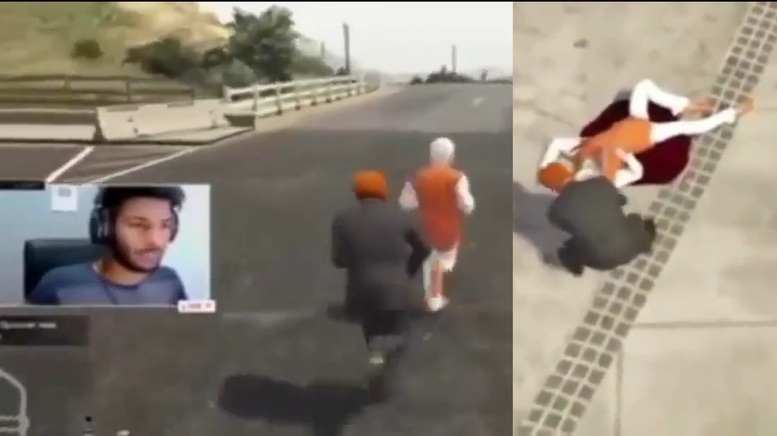 While the controversy over Prime Minister Narendra Modi’s security breach in Punjab has yet to die down, netizens have stumbled upon the depiction of the PM’s assassination in gaming videos showing the PM being chased and attacked by mobs of turban-wearing attackers with banners of ‘Kissan Ekta’ (Farmers Unity).

Many such videos are available on YouTube and have been around for at least an year! One of the videos was live streamed by YouTuber ‘Happy Goldsmith’ in which he shows the figure of the PM being brutally beaten to death by an attacker armed with a baseball bat. Manpreet Singh, the 20-year-old YouTuber from Punjab is seen in the frame doing a commentary of the assault in Punjabi.

He appears to encourage the horrific act through his outrageous commentary that roughly translates to, “The Police providing security to Modi will work with us today. He (Modi) thinks the Police will protect him, but he is wrong… Let him come out. I will teach him a lesson with this (baseball bat).” When the PM’s character comes out of the car, the armed man chases him down and brutally assaults him with the bat – the PM is shown lying in a pool of blood by the end of the video.

With close to 3,00,000 subscribers on his YouTube channel, the YouTuber from Bagha Purana, Punjab often uploads streaming videos related to games like GTA5, Valorant, Farmer Simulator and uploaded the controversial video four months ago. Though Manpreet Singh has now deleted the video, we are left wondering how did YouTube as a platform allow this horrific, violent and murderous video to stay on their platform for all these months.

When the video gained major flak from the netizens across social media, Singh’s first reaction was to laugh off the controversy. Mocking the backlash, he said, “It was a game… Bloody Modi Bhakts have come”. He had also asserted that he will not delete the disturbing video.

However, as the backlash continued to gain momentum with the video being widely shared on Twitter and Facebook, the YouTuber took the video down and returned to social media with an elaborate apology playing the victim card. At first, he tweeted his ‘apology’ and then released a three-minute-long video apology.

In the tweet, Singh says he was ‘such a kid at that time’ (when he made the video a few months back).

In the video, Singh said that his 4-months-old video is being circulated on social media and he is sorry for posting the same. He then alleges that he and his family were getting death threats, people were messaging him and calling him on social media. He is being abused and threatened. He shares that he has been facing a lot of hate and complains that netizens were linking a character of a gaming video to real life and taking it seriously.

He claims he is new to gaming, is just learning and that the purpose of creating this game was to make it ‘funny’. However, it does not require expertise in video gaming for a 20-year-old adult to comprehend that showing the assassination of the Prime Minister is criminal on multiple levels.

We are also forced to wonder that during the four months when this terrible video by Singh was online, did his family or elders not see this? Did Singh’s family members not understand that this video was wrong?

The radicalization among a section of youth in Punjab is now touching new heights. The Congress government and Sikh clergy is doing nothing to contain this radicalization, on the other hand they seem to be stoking the fires. Khalistani infiltration of the protests at Delhi’s borders were clear right from the outset, and the violence on January 26, 2021 and storming of Red Fort was a clear act of sedition.

But the public discourse has been so perverted by Hindu-haters in media, academia and intelligentsia that such open death threats to the PM and to the integrity of the nation are downplayed and reduced to mere politicking.

Many left-liberals from the secular Congress ecosystem are mocking the serious security lapse as a storm in a teacup. This does not come as a surprise though – several columnists for media outlets like Quint and DailyO have in the past wished for the PM’s assassination, and the likes of Karan Thapar and Mani Shankar Aiyer have cryptically asked for his ‘sudden removal’.

Even a real terror attack – the serial blasts during a 2013 Modi rally in Bihar failed to elicit any concern in our left-liberal mafia. The Islamic SIMI terrorists responsible for those blasts were recently convicted and 4 out of 9 were given the death sentence, but that news barely made a dent in the news cycle.

No other country takes such a lackadaisical approach to internal security and threats to its leadership. In 2009, IIT alumnus Vikram Buddhi was sentenced to 57 months in prison and three years of supervised release for posting hate messages in 2006 to the then American President George W Bush. In 2020, a man who sent death threats to the UK PM Boris Johnson and his partner was handed a five-year prison sentence.

The central government led by PM Modi must act now with a firm hand to control the downward spiral in the security situation of Punjab. Else we could soon see a return to the bloody and terror-filed 80s where ordinary Punjabis, both Hindu & Sikh will be the sufferers.

Who did the real beadbi (sacrilege) of Golden Temple and Guru Granth Sahib?