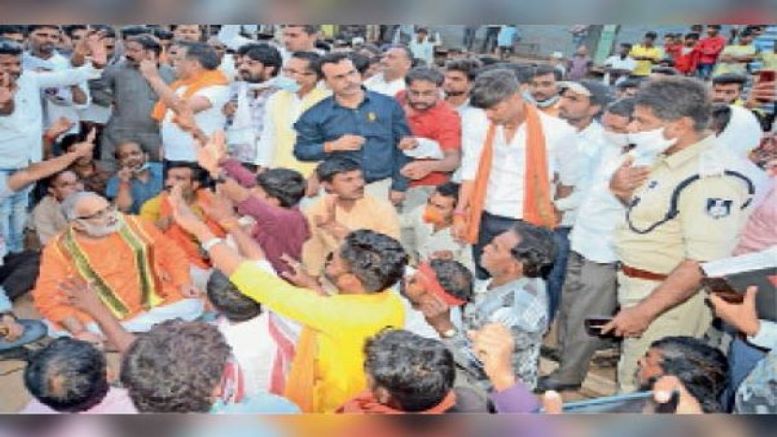 Lateri Murwas Panchayat sarpanch Ashadevi’s husband Santram was crushed to death under a tractor by the forest mafia on the afternoon of March 18. After this incident, Sironj MLA Umakant Sharma alleged that the police station in-charge did not help in this matter and have been trying to shield the accused.

While Santram was suffering due to pain, the police didn’t come forward to help him. MLA Umakant Sharma arrived with his workers and laid siege to the Murwas police station. The MLA has alleged that the murder was a well-planned conspiracy.

Reports indicate that after the murder, the accused waved swords and guns to threaten the people of the area to create panic among the people. MLA Umakant Sharma has alleged that the accused threatened the eyewitnesses with swords and guns and threatened eyewitnesses with murder if they testify. Lateri SDM imposed Section 144 in the entire block in view of the issue.

The incident took place when the sarpanch’s husband was going from the Murwas Panchayat Bhavan towards Bhairo Chowk. Rizwan’s son Fakir Mohammed and 3 other companions hit his bike with a tractor fitted with blades at 2 pm. They kept running him over with the tractor till he breathed his last. He died on the spot itself.

Available information suggests that Santram had raised the issue of forest mafia Fakir Mohammad and his sons Irfan, Rizwan, Umar and Farukh along with that of Jahur Khan, and Sayeed Khan among others. He had registered a complaint with the officers against all of them.

The sapranch’s husband had pointed out that Fakir Mohammad and and others had encroached upon hundreds of acres of land belonging to the forest department. He had registered a complaint regarding the same with Collector Dr. Pankaj Jain. Jain, in turn, had asked Lateri SDM to initiate action in the matter which had infuriated he mafia.

Fakir Mohammad and his relatives as well as companions had encroached upon several acres of land. Fakir’s son Umar works with the forest department as a constable. Due to Umar’s contacts within the department, information regarding the complaints would reach Fakir. Santram also alleged that forest department officials Santosh Dubey, Pankaj and others kept Fakir informed regarding the complaints raised by Santram.

Dr. Pankaj Jain informed the media that Santram had brought several issues related to encroachment to his attention. In this regard, the Divisional Manager of the Forest Development Corporation, Adarsh Shrivastava was called on January 28 and ordered to take action based on Santram’s complaint. Accordingly, the Divisional Manager sent a letter to his officers on 9 March and subsequently a team was formed on 16 March for initiating action.

Members of Valmiki Samaj had protested on March 19 following the murder of Santram. At 10.30 am, the people of the society had submitted a memorandum to the Collector and demanded action against the accused.

Vinayak Sharma, SP of Vidisha, issued a statement in the matter and said that one of the accused, Rizwan, has been taken into custody. Further investigations are ongoing.