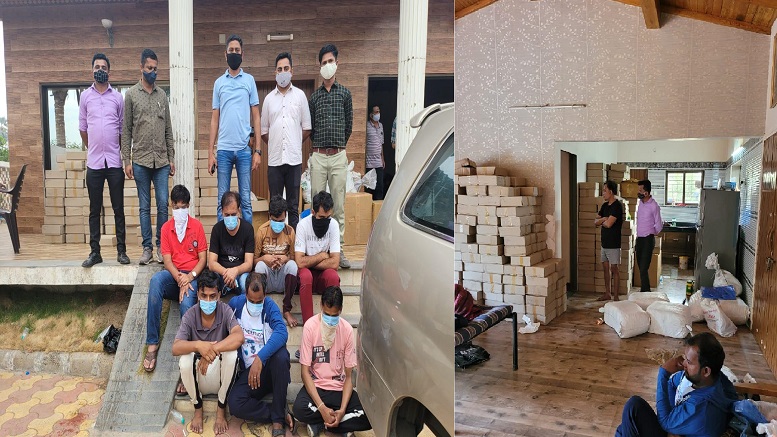 A fake Remdesivir manufacturing racket was busted by Gujarat police on Saturday. Remdesivir injections are in high demand for treatment of Covid-19 patients. HinduPost had recently reported how they were being sold in the black market at exorbitant prices ranging from 40K to 50K in Delhi and how greedy operators are now exploiting the pandemic.

Morbi Superintendent of Police, Subodh Odedra said that a team of Crime Branch officials received a tip-off that two men were selling Remdesivir at exorbitant prices on the black market. Based on this information, the police apprehended Rahul Kotecha alias Rahul Lohana who runs an antiques shop in Morbi, and his friend Raviraj Hirani on Friday. 41 vials and Rs 2.15 lakh in cash, allegedly earned by selling the fake injections were confiscated from their possession.

During interrogation, the duo told the cops that they had received the consignment of fake injection from agents residing at Juhapura in Ahmedabad. The information led the Morbi police to Mohammed Ashim alias Ashif and Ramiz Kadri. Police in coordination with Ahmedabad Crime Branch conducted a raid in Juhapura and seized 1,170 vials worth Rs 56.16 lakh from the residence of Ashif and Ramiz Kadri. Rs17.37 lakhs in cash that the duo had earned selling the drugs was also seized.

This duo, in turn, told police that they were getting the supply of the drug from Kaushal Vora, a resident of the Adajan area of Surat and that they were expecting another consignment from Vora. Another Crime Branch team found that Vora had hired a farmhouse in Pinjrat village in Olpad taluk of Surat district.

The cops raided the farmhouse and found that the criminals were actually counterfeiters and that the drugs were cheap knockoffs. The accused were in fact mixing glucose and table salt and passing them off as the life-saving Remdesivir injection used in treating corona! 3,371 vials of fake injections worth Rs1.61 crore face value (for the originals) and Rs 90.27 lakhs in cash were confiscated from the accused.

Another accomplice, a Mumbai resident named Punit Talal Shah involved in packing the fake drugs was also picked up taking the tally to seven arrests. Police found an additional 160 fake Remdesivir injections of Rs7.68 lakh face value and Rs 74.70 lakhs in cash that this duo had earned by selling the fake drug.

Vora is said to be the mastermind of the racket. The Morbi SP said that “The accused had taken the farmhouse on rent and were involved in making duplicate injections for the past 10 to 15 days. It was like a mini-factory. We have seized 30,000 stickers of Remdesivir and over 60,000 empty vials,”. The SP added that “The accused say that they had generated the cash we seized, by selling the fake drugs. We are investigating as to whom they had sold this compound,”

Morbi is one of the worst affected districts in Saurashtra and the waiting period is comparably longer for getting Remdesivir injection from the state distribution centers. The arrested are accused of distributing their fake drugs in different parts of the state through their agents.

They have been booked under various sections of the Indian Penal Code for adulteration of drugs, its sale, cheating, criminal conspiracy, and Section 308 pertaining to culpable homicide. The accused were also booked under The Essential Commodities Act and The Disaster Management Act. Hopefully this should act as a deterrent to future criminals.