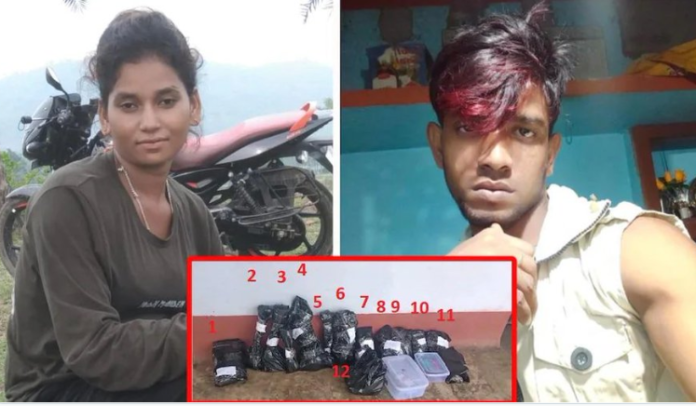 In yet another spine-chilling case of grooming & ‘marriage’ followed by a brutal murder, 22-year-old Rubika Pahadin was murdered by Dildar Ansari and his family in the Borio Santhali village of Sahibganj district, Jharkhand.

Ansari, a scrap dealer, was already married to a Muslim woman Gulera. But he pretended to be single and groomed Rubika for 2 years, convincing her to first enter into a live-in relation, as per India Today. He finally married her around a month back. But once she found out that he was already married, there were constant fights between the two. His family were also against the second marriage. The first wife Gulera also continuously instigated Dildar against Rubika.

As per one report, Dildar Ansari’s mother Maryam took Rubika to her brother Moinul Ansari’s house on Friday night. There, Dildar and the other family members brutally murdered the Hindu janjatiya (Scheduled Tribe i.e. ST) girl, and chopped her into 20 pieces with an electric iron cutter.

After killing Rubika, Dildar and his family went to file a missing complaint in a bid to evade arrest.

Police swung into action after villagers found a human leg and other body parts being eaten by stray dogs behind an under-construction Anganwadi centre in Borio Santhali village. Superintendent of police Anuranjan Kispotta and other police officials reached the crime spot on Saturday night and sniffer dogs were also pressed into action. Soon, more mutilated body parts were found in an old house in Santhali Momin Tola area.

Police have recovered 18 pieces of the body till now, but the head is yet to be found. Rubika’s father claims that his daughter’s body was chopped into 50 pieces.

A total of 9 people from the same family – Dildar Ansari, his father Mustakim Ansari, mother Maryam Khatoon, first wife Gulera, sister Shareja Khatoon, brothers Amir Ansari and Mahtab Ansari, and their wives – have been arrested or detained. Dildar’s maternal uncle Moinul Ansari is absconding and believed to be in Delhi. Two sharp-edged weapons, believed to have been used in the murder, have been recovered from his house.

As per another Dainik Jagran report, there is a possibility of this crime being connected to human trafficking too. Recently, two minor janjatiya girls from the same community as Rubika were detained from a nearby hotel, along with one minor youth and an adult male. Some sources claim the two minor girls were related to Rubika. In the past too, there have been several cases of Islamists trapping young girls through love jihad/grooming jihad and then pushing them into the flesh trade racket – see this, this.

Although this case has several disturbing similarities with the much-talked about Shraddha Walkar murder by her live-in partner Aftab Poonawala, the even more chilling reality is that such murders of Hindu girls by Islamist men are not new, but just getting more discussed these days as Hindus are slowly waking from the secularism-induced slumber.

As is the wont of all ‘secular’ leaders, Jharkhand’s CM Hemant Soren (from an ST community himself) has callously shrugged off yet another brutal murder of a young girl in his state, by deploying whataboutery. This free pass to escape harsh mainstream media scrutiny and piercing questions is available only to ‘secular’ (i.e. anti-Hindu) netas.