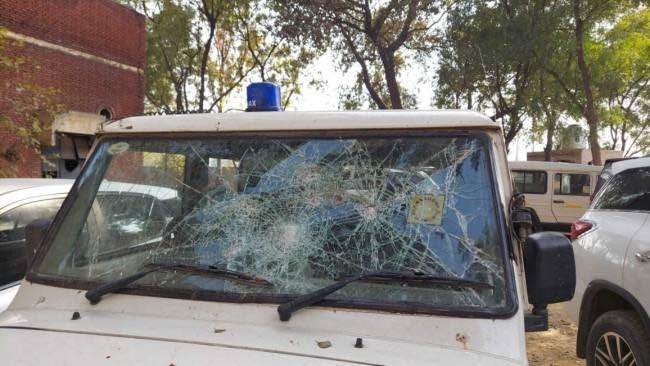 Cow smugglers and villagers in Mewat, Haryana fired gunshots and threw stones at a police team, leaving 8 personnel injured. They destroyed police vehicles and ran away with two dozen cows, bulls and calves that the police had rescued. The injured policemen were admitted to Shahid Hasan Khan medical college.

The incident happened in Jakhopur village of Punhana block, district Nuh on 28 January. Upon A.S.I Kalyan Singh’s complaint, 10 named and around 60 unnamed people were booked under various sections for attempt to murder, assault, interrupting government work, destroying police vans, and under the cow slaughter Act.

According to a local media report, injured policeman A.S.I Kalyan of Nuh police in his complaint said they had received information that cow smugglers brought the cows to slaughter them. A raid was conducted under the guidance of C.S. branch in-charge officer Virendra Singh. As per the information, police found 30-40 cows, bulls, and a calf tied in a house. The smugglers scattered when the police arrived.

When the police tried to take the cows, bulls with them, their route was blocked and the mob started firing with country pistols and throwing stones at the policemen from nearby terraces and hillocks. Officer Virendra Singh was hit with pellets from the illegal guns and A.S.I Kalyan Singh, Constable Khemchand, soldiers Sandeep, Ajit, Aakash, Vijay, Ajay were injured. Crime branch Punhana Police station’s car was also damaged. By the time more police force arrived, the accused had fled.