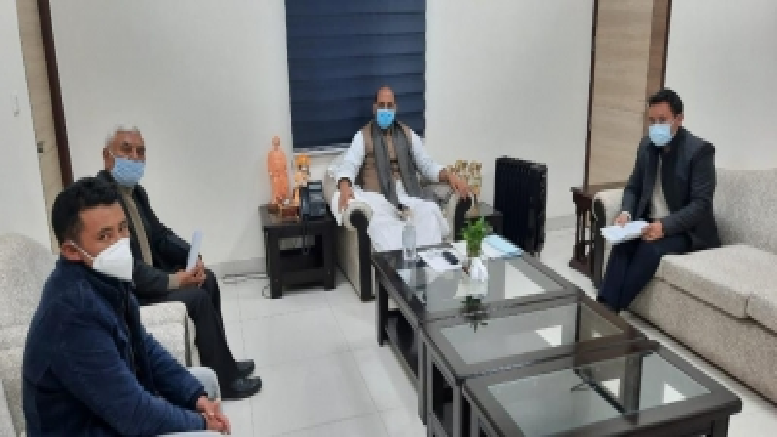 The Chinese People’s Liberation Army (PLA) is using nomads in Ladakh to transgress into Bharatiya territory while the Bharatiya Army has restricted its own nomads to pasture lands, severely impacting the lives of locals, the Ladakh Hill Development Council has flagged to Defence Minister Rajnath Singh.

A three member delegation of Ladakh Hill Development Council met Singh on Tuesday and urged for unrestricted access for the locals for grazing and other border development issues. The lives of locals near the Line of Actual Control have been severely impacted after the standoff between Bharat and China started in May 2020.

A representation given by Konchok Stanzin, Councillor of Chushul, along with two other members of the delegation. “The Chinese use their nomads community to transgress on our land in a step-by-step approach. The movements of the nomads belonging to this side of the border are restricted by the Indian Army from grazing their livestock on the traditional pasture land,” the delegation told the Defence Minister.

They also submitted that nomads on Bharat’s side are soldiers without uniform. “The Indian Army must trust us by not restricting our movements relating to grazing. In this regard, we kindly request it to grant us permission to move our shepherds with their livestock into traditional pasture lands as there is no substitute pasture land available in and around the villages, resulting in a mortality of livestocks and loss of income to the villagers,” they requested.

The sparsely populated areas like Lukung, Yourgo and Phobrang lead to the northern bank of Pangong Lake that includes the Finger Area which has been a major friction point between the armies of Bharat and China. The delegates stated that they are hopeful of some quick action after the meeting with Singh.

“The Defence Minister told us that he will look into the issues and also write to the Union Home Ministry as many things raised by us fell in its domain,” Stanzin said.

Why Bharat needs to talk more about Shaksgam Valley