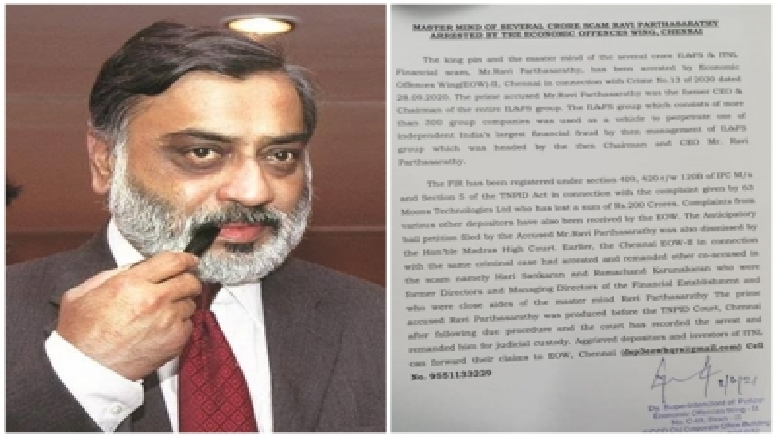 The Economic Offences Wing (EOW) of Chennai Police said on Friday that it has arrested Ravi Parthasarathy, the former Chairman of IL&FS Group, in the Rs 1 lakh crore scam, which triggered a liquidity crisis in the financial services market in 2018.

EOW DSP Prakash Babu confirmed to IANS that Parthasarthy has been arrested and taken into police custody for 15 days. He added that his bail hearing will come up for hearing on Monday.

Parthasarthy, the kingpin, mastermind and chief architect of the Rs 1 lakh crore IL&FS scam, has been arrested by the EOW in connection with Crime No. 13 of 2020, dated September 20, 2020, the EOW of Chennai Police said in a statement.

The EOW stated that the FIR has been registered in connection with the complaint given by 63 moons Technologies Ltd, which lost a sum of Rs 200 crore. Complaints from various other depositors have also been received by the EOW.

The anticipatory bail petition filed by the accused Parthasarathy in Crl OP No. 2007 of 2021 was also dismissed by the Madras High Court. Aggrieved depositors and investors of IL&FS Transportation Networks India Ltd (ITNL) can forward their claims to EOW, it added.

Notably, Parthasarathy, who is said to be the close confidant of former Finance Minister P. Chidambaram, is accused of fraud with intent to injure the interests of the company, its shareholders and lenders, resulting in wrongful loss to the company.

Under his stewardship, trouble surfaced at IL&FS in the July-September quarter of 2018, when two of its subsidiaries started defaulting on repayment of loans and inter-corporate deposits to lenders.

On October 1, 2018, the Central government took steps to take control of Infrastructure Leasing & Financial Services Limited (IL&FS) through a directive by the National Company Law Tribunal (NCLT) and arrest the spread of the contagion to the financial markets. A new board under the leadership of banker Uday Kotak was constituted as the earlier board was deemed to have failed to discharge its duties.

The Government of India (GoI) in its petition has mentioned, “Ravi Parthasarathy and his team were responsible for the negligence, incompetency and misleading the public by presenting rosy financial statements. IL&FS was camouflaging its financial statements by hiding a severe mismatch between its cash flows and payment obligations. It was also hiding total lack of liquidity and glaring adverse financial ratios.”

Parthasarathy, who was at the helm of IL&FS for over 25 years, is accused of masterminding one of the largest financial frauds and systematically driving a behemoth of a financial institution to financial ruins.

In addition to the premier investigating agency, the Serious Fraud Investigation Office (SFIO), the Reserve Bank of India, the Ministry of Corporate Affairs (Union of India), the Registrar of Companies (RoC), the National Company Law Tribunal (NCLT), Mumbai, along with the Grant Thornton forensic report have made adverse findings against him.

The RoC has observed mismanagement and compromise in corporate governance norms, while there is another FIR registered by the EOW-New Delhi against Parthasarathy and Hari Sankaran under various sections of IPC.

In one of the most damaging findings, the GoI petition mentioned, “IL&FS had created a trust known as the Employee Welfare Trust which was used as an instrument to enrich its directors at the cost of the Company. The said trust was used to perpetrate a fraud on IL&FS and its group companies. The trust owned 12 per cent of IL&FS Limited. Ravi Parthasarathy and certain other senior IL&FS personnel were major beneficiaries of the Trust.”

The RBI report, which it submitted on March 22, 2019, underlined that the major role in perpetrating the fraud and financial irregularity was played by Parthasarathy during his tenure as the Group Chairman.

The report pointed out indiscriminate sanctioning of loans, flouting of RBI norms, fraudulent transactions to certain accounts, showing inflated numbers of subsidiaries, conflict of interests, and the concentration of power in the hands of few, which included Parthasarathy.

The SFIO complaint, dated May 30, 2019, named Parthasarathy as the prime accused. The report mentioned that Parthasarathy was the key decision-maker in the IL&FS Group and used the group as his fiefdom.

Being the Chairman of IL&FS Group and Director of its various subsidiaries, the coterie led by Parthasarathy abused its position and diverted funds of its group companies.

It may be noted that the NCLT-Mumbai order to recast the accounts of the IL&FS Group was challenged by Parthasarathy in the Supreme Court, which upheld the GoI decision.

The forensic audit by Grant Thornton also revealed a bevy of illegal practices, bribing of credit rating agencies and other fraudulent practices, indicating clearly the involvement of the then IL&FS Group Chairman Parthasarathy.