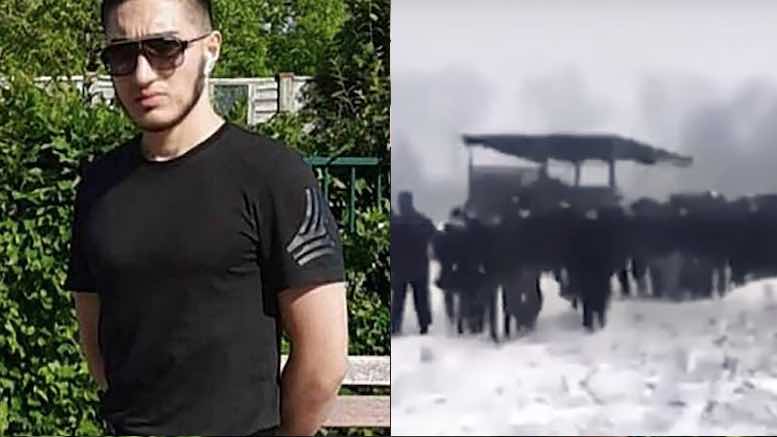 The Chechen terrorist who beheaded French school teacher Samuel Paty near Paris for showing cartoons of Islamic prophet Mohammed to his class has been given a hero’s funeral in his native Chechnya, reports DailyMail.

“Footage shows mourners at the ceremony for Abdullakh Anzorov, 18, in his native village of Shalazi in the oil-rich Russian region. The body of the killer who decapitated teacher Samuel Paty, and was lauded as a ‘lion of Islam’ at his funeral, had been returned from France on Saturday.

Anzorov was shot dead by French police minutes after the beheading in the Paris suburbs on October 16. Some 200 people attended the Muslim funeral in snowy conditions, said BAZA media which reported Anzorov had been buried ‘with honours’.

…A street was unofficially named after the teenage terrorist, said reports.

Video of the mourners praying as they walked with Anzorov’s body was shared on a number of platforms. One carried a message lauding him as ‘The Lion of Islam’. A message with the video read: ‘The Lion of Islam has arrived to native soil today, and returned to the soil. ‘No-one but Allah has strength and power.’

…The killing (of Paty) followed an online campaign from Muslim parents angry at him for showing cartoons of Mohammed to students. The teacher had used the cartoons from magazine Charlie Hebdo as part of a class on the importance of free speech.

Reports said he had asked Muslim students to leave the classroom before he displayed the cartoons in an attempt to avoid causing offence. Last month three pupils were charged with identifying Paty to Anzorov before the beheading. Another was charged with lying the she had been present when he showed the cartoons.

The Chechen allegedly told pupils he wanted to ‘humiliate and strike’ Paty over the cartoons, seen as offensive by Muslims.

Hardline leader of Chechnya, Ramzan Kadyrov claimed Macron was ‘forcing people into terrorism….not leaving them any choice’ by justifying the cartoons….Kadryov was unusually slapped down by the Kremlin, and told to keep out of foreign policy issues. The Chechen leader hit back defiantly, saying: ‘I cannot and will not silently watch atheists scoffing at religion.'”

Public funeral processions of Islamic terrorists killed in Kashmir also draw large slogan shouting crowds, and end up becoming drives for more terror recruitment. The Indian Army and government authorities belatedly decided to end such public processions which ensued when terrorist bodies were handed over to kins, opting for quiet burials instead from this April onwards.

But this tradition of glorifying terrorists has a long history in Muslim societies. Not many in Bharat today remember that Ilm-ud-din, the man who brutally murdered book publisher Mahashe Rajpal in 1929 for ‘blaspheming’ against Mohammed, was represented by Mohammad Ali Jinnah as a defense lawyer and the man who cried and rendered a eulogy at his funeral (attended by tens of thousands of mourners) was none other than the famous Islamist poet Allama Iqbal who is still revered in secular India.