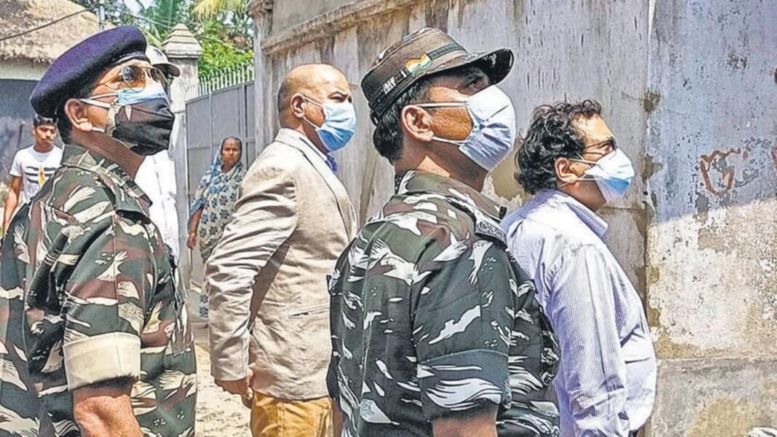 The Central Bureau of Investigation (CBI) has submitted its first charge sheet within 10 days of taking over the investigation of West Bengal’s horrific post-poll pogrom on the direction of the Calcutta High Court. The charge sheet was filed in the Rampurhat district court in Birbhum on Thursday, September 2, against the accused in the murder of BJP leader Manoj Jaiswal.

On May 14th, Jaiswal, a resident of Nalhati, was brutally beaten to death by goons linked to the TMC party. A murder charge was lodged at the Nalhati police station accusing five people of the ghastly murder. The main accused is Mainuddin Sheikh, who along with another suspect, Imran Sheikh, had surrendered before the local police on August 20th. Accused Azimuddin Sheikh had surrendered on June 17th, and has been granted interim bail last week by the court; it is a conditional bail on grounds of his ‘physical illness’. Two other accused, Jahedu Hussain and Farooq Ali are still on the loose.

Seeing Azimuddin being granted bail, the other two accused in the case have also approached the court with the prayer for bail but the CBI was already ready with the charge sheet and the lawyer representing the CBI raised stern objections against the bail prayer of the two accused. In its charge sheet, the CBI highlighted that the investigations are at an early stage and suggested that if the accused are granted bail at this juncture of the case, the investigation might be impacted.

The defendants may manipulate or destroy the pieces of evidence, and both the accused must be interrogated in CBI custody to determine the purpose of the murder, CBI said. The agency will also interrogate the defendants to find out who is behind the murder and who had given the direction of murder, reads the charge sheet. The court has accepted the CBI’s charge sheet and dismissed the bail pleas of Mainuddin Sheikh and Imran Sheikh.

Meanwhile, the CBI Special Investigation Team reached Nalhati in Birbhum and met the family of the slain BJP leader. Central officials have also taken necessary details of the case from the investigating officer at the Nalhati police station.

Presenting the charge sheet at a record speed in the Nalhati murder case emphasises the central investigative agency’s intention of delivering justice to the victims of Bengal violence. The bureau has also arrested four people linked to the post-poll violence in Nadia. Reportedly, 34 new FIRs have also been lodged on various political murders during the violence precipitated on the BJP workers in the state after TMC’s electoral victory on May 2nd.

The CBI personnel have also visited several sites of violence and spoken with families of the victims. Reportedly, the CBI has appealed for a psychoanalytic test on a suspect from the Kankar PS area. This suspect is accused of a BJP member’s murder during the post-May 2nd unrest in the state; the appeal has been accepted by the court as well. A psychoanalytic test is likely to ascertain the mental condition of the accused and also preclude an appeal to circumvent the judicial process with the excuse of illness at a later stage of the investigation.

The legal representative of the ruling dispensation stated that this kind of interrogation has never happened in the area and a psychoanalytic test on an accused is a first of its kind.

The tools employed by the CBI in the course of the investigation has triggered local TMC leaders and members who have been accused of provoking violence in the state after storming to victory on May 2nd, opine locals. Reportedly, many such leaders have fled fearing becoming the CBI’s next target, knowing they will not be able to manipulate the inquiries as they could do with the state police.