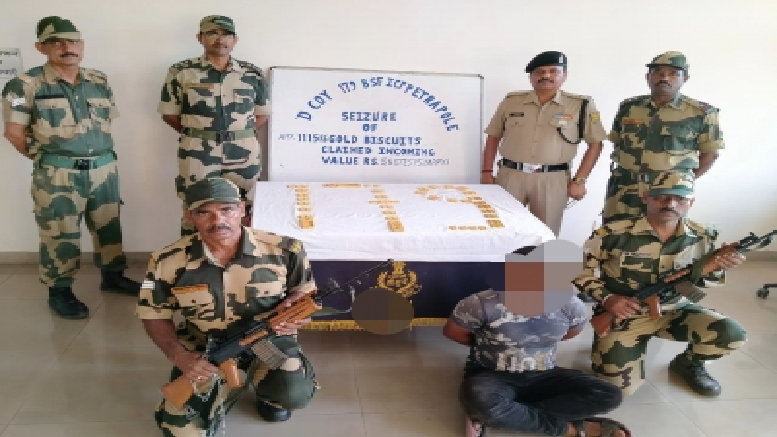 The Border Security Force (BSF) on Tuesday said it has seized 11.62 kg of gold worth Rs 6.15 crore along the Bharat-Bangladesh International Border and arrested two smugglers in connection.

The two smugglers with 74 gold biscuits and three gold bars were arrested in two separate operations.

In the first operation, based on a tip-off, troops of the 179 Battalion BSF were checking vehicles at the ICP Petrapole and around 11.15 a.m. on Monday.

The troops stopped a truck returning to Bharat from Bangladesh (Benapol) near the passenger gate.

During the searc, a large packet wrapped in black cloth was found from behind the driver’s seat inside and when opened, 70 gold biscuits and three gold bars were recovered.

Also on Monday, at Border Out Post Jayantipur under 158 Battalion, BSF troops were during routine checking and stopped a suspected motorcyclist for search.

The troops found four gold biscuits weighing 466.62 grams from under the seat of the motorcycle.

The arrested smugglers have been handed over to the Customs Office Petrapole along with the seized gold.

South Bengal Frontier DIG Surjeet Singh Guleria expressed happiness over the achievement of the jawans. He stated that the BSF has tightened the noose on every nefarious smuggling activity.