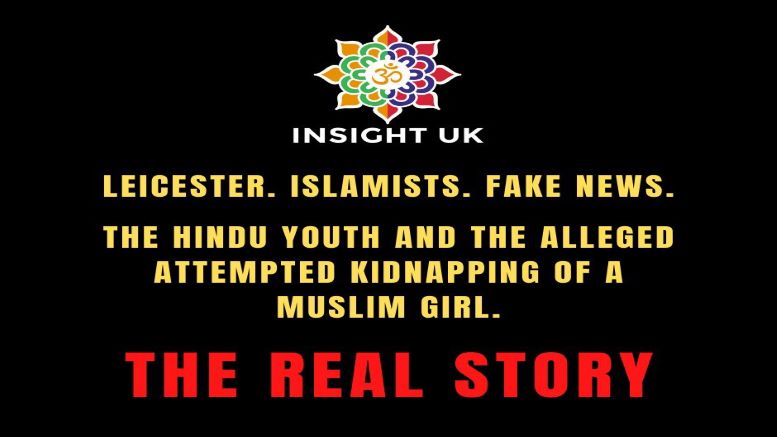 The targeting of Hindus by Islamists through fake news. The Hindu youth and alleged attempted kidnapping of the Muslim girl in #Leicester.

After three nights of continued violence by Islamist mobs against Hindus in Leicester, multiple arrests were made. Shockingly even extremist Muslim men from outside Leicester were found to be participating in violence against Hindus.

The pause brought on by the arrests was quickly followed by an even more dangerous & vile lie to trap & cause unimaginable harm to an innocent Hindu youth who was falsely accused of attempting to kidnap a Muslim girl.

The vicious targeting of an innocent Hindu youth started on 8th Sep when the first Instagram post full of lies was published. This did not garner much attention & the Hindu youth, victim of these falsehoods also decided to ignore what was obviously fake news.

This soon escalated & a story of attempted kidnapping was concocted & shared with a picture of the Hindu youth & his car with a Bharatiya flag, which was then pushed aggressively on different SM platforms with a clear intent to incite further violence against him & Hindus.

As this fake story went viral the targeted Hindu youth started receiving threats by Islamists on his social media accounts. His friends, family and his #Hindu faith were viciously targeted.

On the eve of 12th Sep, some concerned community members notice the highly provocative & fake story going viral on SM. They report the incident to the Police. Community members fearing for the Hindu youth’s family removed the number plate from the car.

Time stamped photos, videos & airline tickets showed that the Hindu youth was not even in the UK at the time of this alleged kidnapping. Police also released a statement confirming that such an incident never took place.

Pleas were also made to Leicester Live to update & publish the Police statement. Although this was done, the damage caused could not be undone. Police asked the family to move to a safer place considering the grave threats.

Every report of an alleged crime by Hindus has turned out to be fake & in reality, it is the Hindus who have been subjected to dangerous propaganda & violence.

Unlike the Finsbury Mosque incident where protection was provided to the community, Hindus of Leicester have been given no security. It is only right to ask what action will be taken against those who made up the lies falsely implicating this innocent #Hindu youth.

(This article has been compiled from the tweet thread originally tweeted by INSIGHT_UK (@insightuk2) on September 16, 2022.)