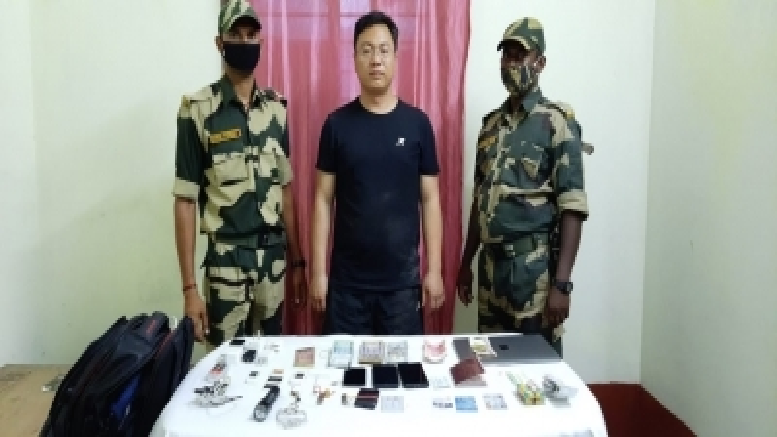 Agencies investigating Chinese national Han Junwe, arrested while illegally crossing into Bharat, say he was a student of a Peoples Liberation Army-run university, where he studied English.

Han, produced in Malda district court on Saturday after his arrest on the Sultanpur border on Thursday, was sent to police custody until June 18.

Police now claim that the Chinese national has said during interrogation that he is a graduate in English from Chun Shi Gong Cheng University in China.

The university is said to be under the control of the Chinese army PLA.

Usually the PLA or MSS (Chinese intelligence services) sponsor bright students to study English and other languages when they want them to accept a career in espionage.

One investigators in the case told IANS that Han displayed amazing confidence in trying to reach his Chinese friend, Sun Jiang, in Lucknow even after he was held by the ATS there on serious charges.

“It is possible his superiors, were he to be working for Chinese intelligence, had tasked him to rescue his friend, whose interrogation in Lucknow threatened to blow the lid on a well-entrenched spy network fronted by a shady commercial operation.”

Han has admitted to sending back to China 1,300 Bharatiya SIM cards which would be of value only to an intelligence agency sending agents regularly or a scamster
syndicate.

It is not clear how he managed to procure such a large number of SIM cards in the first place. Interrogation also revealed that his associates used to hide the SIM cards in their undergarments to smuggle them out of Bharat.

This follows the huge Chinese loan apps scam and analysts say these point to an “unusual national vulnerability” to Chinese cyber frauds .

This latest campaign was operated through two “malicious mobile applications” — Power Bank and EZPlan, the Delhi Police has said.

“Indian intelligence should investigate the national security angle that emerges from these frauds. If these platforms can defraud Indians on such a scale, they can surely provide for covert payments to Chinese agents in India and help them penetrate institutions of national security importance,” said Colonel G. Srikumar (retd), a decorated former military intelligence officer with deep knowledge of Chinese espionage operations.

Eleven people, including a Tibetan woman and two chartered accountants based in Delhi and Gurugram, were arrested following multiple raids in Delhi-NCR and West Bengal since June 2. The footprints of the syndicate were confirmed in West Bengal, Delhi-NCR, Bengaluru, Odisha, Assam, and Gujarat’s Surat, the police said.

Nearly rs 11 crore of cheated money was blocked in various bank accounts and online payment gateways that were being operated by the members of the syndicate based in Bharat as well as China.

Dozens of Chinese and their Bharatiya accomplices have been arrested from all over Bharat in the multi-state loan app scam.

Sun named Han as an accomplice during his interrogation by the UP Police and a Blue notice was initiated to collect additional information about a person’s identity, location or activities in relation to a crime.

Han told his interrogators soon after his arrest that his request for an Bharat’s visa was rejected after Sun’s arrest, leaving him with no option but to try to enter Bharat either via Bangladesh or Nepal.

In his initial interrogation, Han also told BSF officers that he owns a hotel in Gurugram and has been to Bharat at least four times since 2010. While some of the hotel staffers are Chinese, some Bharatiya nationals have also been employed at the hotel, he said.