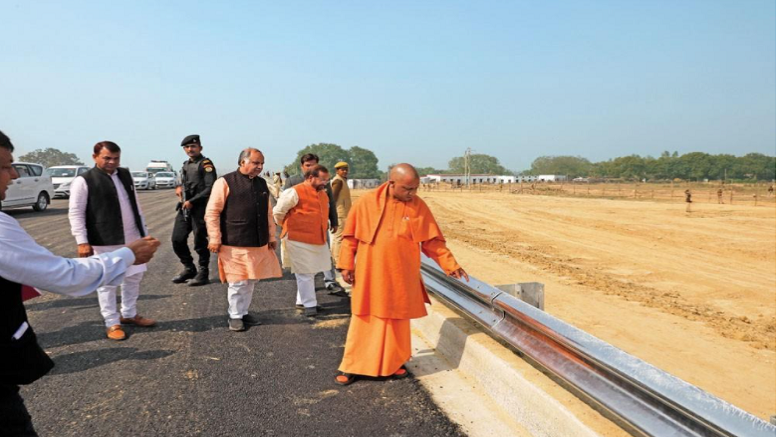 Recently when Yogi Adityanath was in Mumbai to meet investors from defense manufacturing and cinema industries, chief minister of Maharashtra, Uddhav Thackrey took a jibe on Yogi saying “no one can come to Maharashtra and take away industries from here”. It was an obvious taunt at the Chief Minister of biggest state of Bharat, who is trying very hard to remove the tag of BIMARU from his state and pushing his state on the path of development.

Yogi answered this in his usual cool and calm style “We’ve not come here to take away anything. We are creating something new. Why are you getting concerned? We are giving a new world class infrastructure to all. Hence, everybody will have to grow up, widen his thinking and better facilities will have to be given. One who is able to do that will get the people.”

One line in his statement that must be noticed- ‘we are creating something new.’ It is not just something; his government is virtually creating everything new from scratch. In fact, he is on a mission to create a new Uttar Pradesh, a state which you will not be able to relate with its previous image few years from now.

Uttar Pradesh is changing, it is changing very fast because Yogi is in hurry and justifiably so. He is pained by how Uttar Pradesh has been treated by previous governments over the years. He has also taken strong notice of how other state governments forced migrant workers of his state to suffer during lock-down and corona pandemic. He has no time to waste and that is why he is working overtime on a mission mode.

Its turning out to be a race against time for he knows that five years are nothing in the timeline of thousand years old civilization the pious land of Uttar Pradesh has been witness to. He knows clearly that he has to deliver before 2022; otherwise if someone else comes to power then, the state will be once again pushed in reverse gear.

Since coming to power in early 2017, Yogi Government has been announced and started working on a number of infrastructure projects at a scale and speed never heard of in this state. Expressways, rapid rail, metros, airports, industrial corridors, software parks, film city – all key infra sectors are getting unprecedented push from the state government.

For example, take the case of Road transport. Fully understanding the importance of road connectivity between different parts of the state, Yogi Adityanath’s government has launched massive projects to connect the most backward regions to the state capital Lucknow and further to national capital Delhi.

Few years from now, Uttar Pradesh will be known as the ‘state of expressways’. Apart from already operational Yamuna Expressway and  Agra-Lucknow Expressway, the State has launched several big projects to connect the entire length and breadth of the state.

Purvanchal Expressway, although conceived by previous Samajwadi government, has been fast tracked by Yogi Government. If not for corona pandemic, this would have been operational by now. Apart from completing land acquisition in record time, Yogi Government re-evaluated the project and fresh tender was issued, resulting in saving of almost Rs 600 crores from earlier estimated cost. It will now cost almost Rs 22500 crores and expected to be opened for public by early 2021.

The 340 kilometers long expressway will be the longest access control expressway in the country when operational. This connects one of the most backward regions of the state, Purvanchal to state capital Lucknow. Originating at Ghazipur, it passes through Mau, Azamgarh, Ayodhya, Amethi, Sultanpur and Barabanki, finally ending at Lucknow. These districts are among the most backward in the state. The connectivity provided by this expressway will boost the economic development of the region hugely.

Not only Gorakhpur, this link will also help people from adjoining districts like Deoria, Sant Kabir Nagar, Sidharth Nagar, Ambedkar Nagar and Kushinagar to easily reach the state capital and further to national capital.

Apart from Purvanchal, another backward region of the state, Bundelkhand, too is getting full attention from the Yogi Adityanath led government. 296 kilometers long Bundelkhand Expressway will connect Chitrakoot to the Agra-Lucknow expressway near Etawah.

Starting at Bharatkoop in Chitrakoot, it will pass through some of the least developed districts of the state like Banda, Mahoba, Hamirpur, Jalaun, Auraiya before ending at Etawah. It will be a four lane expressway expandable up-to six lanes in future. Over 95% of the land acquisition has been done and almost 25% construction work has been completed.

Once operational, this will provide much needed push to the development of this economically and industrially backward zone. Coupled with defense industrial corridor coming up in the region, Bundelkhand is poised for the big economic development it has always been yearning for.

With these two expressway projects CM Yogi is aiming not only for better connectivity between different parts of the state, but the overall economic uplift of the most backward regions of the state. Purvanchal and Bundelkhand have been historically neglected by previous governments over decades. That’s why both the projects are strategically planned in these two most underdeveloped pockets of the state.

Even as these two expressway projects are being constructed in fast track mode, Yogi Adityanath went ahead and announced another mega project, Ganga Expressway during 2019 Prayagraj Kumbh. The vision is to connect two of holiest cities for Hindus, where Kumbh Maha Samagam is hosted, Prayagraj and Haridwar. This is one of the biggest, boldest projects ever announced in the state so far.

Phase 1 and 2 combined, this will be more than 1000 kilometers long. The Bhumi Pujan is expected to happen during mid-2021. The 596 kilometers long phase 1 of the Ganga Expressway will connect Meerut in western Uttar Pradesh to Prayagraj in eastern part of the state.

Although started before Yogi Government came to power, Delhi- Meerut Expressway is another important project for the state. 74 kilometers long expressway will connect Delhi to Meerut with a 22 kilometers long link road from Dasna to Hapur. This expressway will help to connect Delhi NCR with districts of eastern Uttar Pradesh like Prayagraj, Varanasi, Ballia etc. via Ganga Expressway.

Delayed for years, the work is in final stages now and it’s expected to be opened for public use in early 2021. Phase 1 and Phase 2 of the project are already operational.

Not just expressways, state government is also pushing construction of many state highways through Uttar Pradesh State Highways Authority. Every district headquarter has now been connected to four lane state highways. Clearly, few years from now, you will be able to reach any corner of the state within hours in comfort of your own vehicle.

To summarize, by the time next Lok Sabha elections are held in 2024, Uttar Pradesh will be home to nine massive expressways having total length of almost 2500 kilometers. Coupled with more than 11500 kilometers of National Highways, second longest NH network after Maharashtra, Uttar Pradesh will have one of the best road networks among all states.

Not just people of the state, investors from all over the world are eagerly awaiting the transformation of the roadways in the state- शुभस्य शीघ्रम।