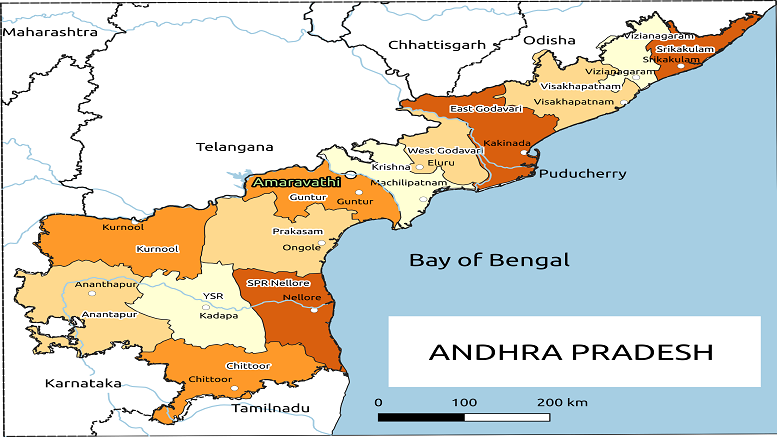 This article attempts to highlight the plight of the state of Andhra Pradesh post bifurcation of the state into AP and Telangana in 2014.

As per the AP Reorganisation Act, 2014, Polavaram irrigation project is declared as national project. Therefore, execution of the project and obtaining all requisite clearances including environmental, forests, and rehabilitation and resettlement norms become the responsibility of the central government. However, the state has volunteered to take up the task of execution of the project in order to expedite the works and complete the total project by 2019 since the projects executed by the central government are invariably found to be delayed leading to cost overruns.

The state government submitted the revised cost estimate in August, 2017 for Rs. 58,319.06 crores (at 2013-14 price level). Major share of project cost amounting to Rs. 38,000 crores is towards rehabilitation and resettlement where the cost increase is mainly due to the higher compensation to be paid for land acquisition consequent to the Land Acquisition Act, 2013 passed by the centre.

The Technical Advisory Committee of CWC (Central Water Commission) has cleared the revised cost estimate of Rs. 55,548 crores only on 12th February, 2019. After almost 2 years in December, 2020 the Centre, through the Union Jal Shakti Ministry, has indicated that the cost of the Polavaram project is ₹55,548.87 crore (at 2017-18 price level) in its annual statement and has stated that additional funds will be released by NABARD.

The centre has informed that Polavaram project will be completed by April, 2022, as per the revised schedule.

As per the provisions of the Act, the following infrastructure is expected to be created in Andhra Pradesh.

This port was to be completed in phases with Phase I by end-2018. This is a mandatory provision under the Act. However, since Niti Aayog has said this major port is not feasible, the centre has kept this issue in cold storage.

Due to lack of response from the centre, the State went ahead to establish the integrated steel plant on its own and laid foundation stone on 27.12.2018 for the same. The state is planning to select a joint venture partner to operationalize the steel plant by March, 2024.

It is ironical that instead of getting a new steel plant as per the AP Reorganisation Act, the state is now on the verge of losing its existing Vizag steel plant!

This Cracker and Petroleum Complex was to be set up in Kakinada. The 1 MMTPA complex with feedstock of Ethane, Naphtha and Propane is estimated to cost Rs.32,900 crore. The GAIL-HPCL consortium after discussions with Government of Andhra Pradesh suggested a viability gap funding of Rs. 1,238 crores per annum for 15 years from zero date, to be provided by the State Government, repayable  over the next 15 years. Government of Andhra Pradesh agreed to subsidize power (Rs 577 crore per annum), water (Rs. 51 crore per annum) and provide all external infrastructure support.

Government of Bharat was requested to fund the viability gap as the project was promised by Government of Bharat to the residuary State of Andhra Pradesh.  The centre is yet to take action on this proposal. Andhra Pradesh government has revived this project in November, 2019 and has drawn up VK-PCPIR Mater Plan (Visakhapatnam- Petroleum, Chemical and Petrochemical Investment Region) -2031 but it is still a distant pipe dream by any yardstick.

State Government requested Government of Bharat for development of VCIC on the lines of DMIC through 100% grant funding by NICDIT. The matter is yet to be decided by the centre. This project is yet to cross the first baby step- Master Planning and Preliminary engineering phase.

The Act has a provision for creation of a separate railway zone for the state of Andhra Pradesh. After much procrastination on 27th February, 2019 the centre has announced a new railway zone for AP to be headquartered at Vizag. The new zone known as South Coast Railway Zone will comprise the divisions of Vijayawada, Guntakal and part of Waltair divisions. The other part of Waltair will be merged with another newly formed railway zone known as East Coast Railway being headquartered at Bhubaneshwar in Odisha.

The splitting of Waltair division into two is likely to result in major portion of the freight revenue (around 70%) going to East Coast Railway (Odisha) whereas much lesser revenues mostly from passenger traffic (around 30%) coming to South Coast railway (AP).

So effectively with this centre’s decision AP State has in fact lost the existing benefits rather than getting any additional benefits as envisaged in the Act.

Under the new Metro Policy of 2017, burden of raising funds for the project will be on Government of Andhra Pradesh. Vizag Metro Rail project, proposed to be taken up in four corridors covering a total distance of 75.3 km at an estimated cost of ₹15,933 crore, is expected to be completed by 2028. The first phase, extending over 46.40 km, is expected to be completed by 2025. However, the ground reality is that this project is yet to cross the DPR stage.

The project was originally conceived as a heavy-rail based mass rapid transit system (MRTS), and the Andhra Pradesh government signed an agreement with the Delhi Metro Rail Corporation (DMRC) to execute its 26.03 km Phase 1 project in September 2015. The DMRC invited civil construction bids for both lines, but cancelled procurement due to its high cost and low ridership projections which were not in line with the Government of Bharat’s new Metro Rail Policy of 2017.

In 2017-18, the state government opted for a Light Rail Transit (LRT / MetroLite). It now plans to connect Gannavaram – Vijayawada – Amravati in 3 phases with a 66.2 km network at an estimated cost of Rs. 15,000 crore, based on a recommendation by the SYSTRA – RITES – GOPA JV which submitted its revised Detailed Project Report (DPR) in April 2019.

In budget 2020-21 AP State government has allocated Rs. 3.6 crores for Amaravati Metro Rail Corporation as urban development assistance to Vizag & Vijayawada metro projects. Therefore, the grounding of these two urban metro rail projects in the near future appears to be unclear.

Likewise the property of AP Bhavan at New Delhi is to be shared between the States. Of the 91 institutions listed under Schedule IX, the Telangana government gave its acceptance to the recommendations on de-merger of 68 institutions made by expert committee headed by retired bureaucrat Sheela Bhide and orders relating to majority of institutions were issued accordingly whereas the Andhra Pradesh government gave its nod to recommendations pertaining to de-merger of 53 institutions. This exercise is a work in progress.

Refund of taxes was given on population basis whereas tax recoveries are given on location basis, this alone has caused a huge loss of Rs.3,820 Crores to the Andhra Pradesh State affecting financial stability of the State.

This tax rebate covers 15 percent of higher additional depreciation and 15 percent of investment allowance on the cost of plant and machinery acquired by any manufacturing undertaking setup during the period 1st April 2015 to 31st March 2020 in these seven districts.

However, the state government has requested the centre for the following incentives (in line with the incentives that are being provided to 11 Special Category States):

There is no positive response so far from Government of Bharat for the above.

Government of Bharat has agreed to release an amount of Rs. 350 Crores every year for six years as special development package for the above mentioned 7 backward districts of AP as per the recommendations of Niti Aayog.

He says, “According special category status is purely an executive decision and neither the constitution nor the Finance Commission have anything to do with this.” Therefore, it is evident that the centre is playing the blame game to avoid this issue since other states like- Bihar, Odisha, Rajasthan and West Bengal have been seeking Special Category Status and this leads to opening the Pandora box.

For the capital city of Amaravati, the centre has so far released Rs. 2,500 crores. However, after the change of the government in Andhra Pradesh in 2019 general elections the new government has decided to trifurcate the capital into executive, legislative and judicial centres at Vizag, Amaravati and Kurnool respectively. This has triggered unrest in Amaravati region since nearly 25,000 farmers from 29 villages had given 33,000 acres of land under land pooling for the development of the state capital at Amaravati.

By doing the state bifurcation in the most unscientific way, the then UPA led by Congress has incurred the wrath of the people of AP and was completely decimated in the 2014 general elections. BJP and TDP after coming to power in 2014 in the centre and state respectively for more than 4 years have been under alliance in NDA.

On 16th March, 2018, TDP parted alliance with NDA (BJP). If the loosely framed Act in 2014 by UPA government with lot of loopholes is the root cause of the entire issue, post general elections in 2014 conflict of political interest between BJP and TDP appears to be the main reason for gaps in implementation of the various major provisions of the Act.

The only way out is for the parliament to amend the Act to incorporate specific timelines for implementation of various provisions of the Act and designate a nodal agency for coordination and resolution of differences between the state and the centre. Hope some sense will prevail on the law makers and they will take the required remedial measures at an early date.